3 Key Qualities for a School Makerspace 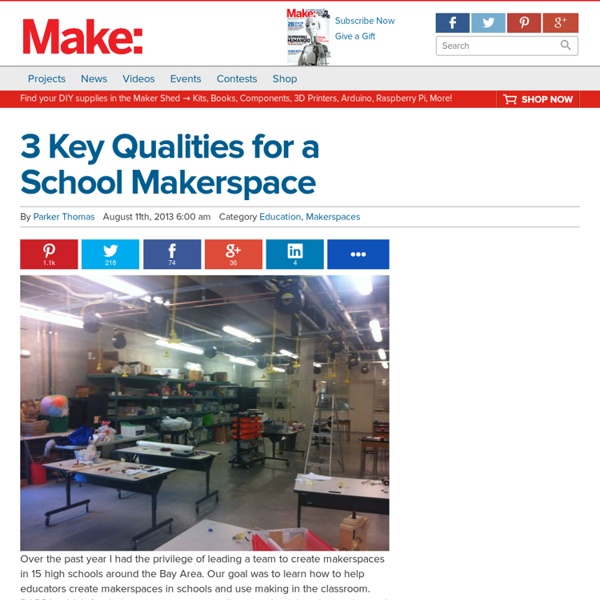 Over the past year I had the privilege of leading a team to create makerspaces in 15 high schools around the Bay Area. Our goal was to learn how to help educators create makerspaces in schools and use making in the classroom. DARPA, which funded our program, eventually wanted to take what we learned and create makerspaces in 1,000 schools. While our DARPA funding ended in December, we believed so strongly in the benefits of these spaces that we continued to support our pilot schools until the end of the year. This was particularly rewarding work. Most of us have enjoyed watching someone’s eyes light up at Maker Faire, but listening to a high schooler describe his or her first open-ended project was very powerful. Every space in our program was different. Process Making requires two sets of skills and the confidence to try something new. The second set of skills can be thought of as diagnostic and problem-solving skills. The first is what we call a level I project or a skill builder.

attempts at using tech effectively in our classrooms On October 1st I started on my efforts toward creating a set of Makerspaces in our school district. I immediately jumped into visiting the d.school at Stanford, collecting every book I could on the topic, and applied to attend the FabLearn conference. A Makerspace has been my goal since the first day I started as STEM Coordinator last year, so when I was recently given the flexibility and permission to move forward, I jumped on the opportunity immediately.

Studio: About NuVu is a full-time innovation school for middle and high school students. NuVu’s pedagogy is based on the architectural Studio model and geared around multi-disciplinary, collaborative projects. We teach students how to navigate the messiness of the creative process, from inception to completion. So, what makes us different? Want to Start a Makerspace at School? Tips to Get Started As the Maker Movement starts to gain momentum, schools that are trying to find ways to foster the do-it-yourself environment can learn a few lessons from another nexus in the universe: public libraries. Dale Dougherty, founding editor and publisher of Make Magazine — and the de facto leader of the Maker Movement — has a vision to create a network of libraries, museums, and schools with what he calls “makerspaces” that draw on common resources and experts in each community. Libraries and museums, he said, are easier places to incorporate makerspaces than schools, because they have more space flexibility and they’re trying to attract teens with their programs.

How to Get Your School Ready for STEM This Year Teaching Strategies Getty By Anne Jolly Are you ready for STEM this year? Is your new multi-million dollar facility completely furnished? Is your staff of thoroughly STEM-prepared teachers ready to go? Create a school makerspace in 3 simple steps As maker education gains steam, many educators are looking for ways to incorporate making and tinkering into their schools and classrooms — often on a shoestring budget. “Kids are saying they want to learn more about technology and science, but they also want to experience it creatively and use it personally,” said Dale Dougherty, founder of Make Media, which produces Maker Faire and Make Magazine. He’ll address how educators can deliver these types of experimental learning experiences during ISTE 2014’s EdTekTalks, a provocative series of mini-keynotes from thought leaders beyond the world of ed tech. “One of the ways we can do that is create more makerspaces for kids.

I Liked Everything I Saw on Facebook for Two Days. Here’s What It Did to Me There’s this great Andy Warhol quote you’ve probably seen before: “I think everybody should like everybody.” You can buy posters and plates with pictures of Warhol, looking like the cover of a Belle & Sebastian album, with that phrase plastered across his face in Helvetica. But the full quote, taken from a 1963 interview in Art News, is a great description of how we interact on social media today.

Why Schools Need to Bring Back Shop Class Sir Ken Robinson, Ph.D, is the author of Creative Schools, The Element, Finding Your Element and Out of Our Minds. The Education Committee of the US Senate is currently considering the re-authorization of No Child Left Behind. Much of the original rhetoric in NCLB was about improving job readiness and employability. In a tragic irony, the focus of the last ten years has not been on improving vocational programs at all but on testing narrow academic standards. New memoir shines harsh light on U.S. schools After more than 30 years as a writer, editor and publishing executive, John Owens left a high-paying job as senior vice president and editorial director of Hachette Filipacchi Media to "give back" to the U.S. public schools he'd attended as a kid. He landed a teaching job at a high school in the Bronx — he calls it "Latinate High School" — that was a model of school reform, but what he found was reform "gone terribly wrong." Owens lasted only about five months, but in the process he began writing about his experience. The result is a closely observed, often hilarious and profane new memoir, Confessions Of A Bad Teacher (Sourcebooks, $13.99). USA TODAY education writer Greg Toppo spoke with Owens recently:

Designing a School Makerspace Makerspaces, STEAM labs and fab labs are popping up in schools across the country. Makerspaces provide hands-on, creative ways to encourage students to design, experiment, build and invent as they deeply engage in science, engineering and tinkering. A makerspace is not solely a science lab, woodshop, computer lab or art room, but it may contain elements found in all of these familiar spaces.

The New Media Consortium Login or Create New Account Member Spotlights RIT Launches Nation’s First Minor in Free and Open Source Software and Free Culture Partner News NMC Partners with the Balboa Park Online Collaborative 4 Ways Technology Can Help Empower Teachers And Students All too often, technology is treated as a silver bullet for perceived problems in education. This sometimes leads to knee-jerk investments, using scarce resources to invest in software or hardware without a clear notion of how either might actually empower learning. Instead of having more technology as a goal, we should have more human interaction, personalization, access, and content mastery as the goals, and then think about what tools can get us there. The 18th century Prussians were one of the first societies to think about truly public education—making (relatively) high-quality education available, for free, to most anyone.

5 Ways Students Can Create Audio Slideshows Somewhere between a PowerPoint presentation and a full-fledged video is the audio slideshow. Creating audio slideshows can be a good way to add meaning to slides that otherwise might not mean much without a presenter. Here are some ways that students can create audio slideshows. Narrable is a neat service for creating short narrated slideshows. To create an audio slideshow on Narrable start by uploading some pictures that you either want to talk about or have music played behind. After the pictures are uploaded you can record a narration for each picture through your computer's microphone or by calling into your Narrable's access phone number. The maker movement: A learning revolution By Sylvia Martinez and Gary Stager 7/21/2014 Topics: Maker movement, Project-based learning The impulse to create is one of the most basic human drives. As far back as the Stone Age, we were using materials in our environment to fashion tools for solving the problems we encountered. And in the millions of years since then, we have never stopped creating. In fact, the rise of civilization is largely defined by the progress of technology of one kind or another.

Higher Education Program About the Program Quality Matters (QM) is a nationally recognized, faculty-centered, peer review process designed to certify the quality of online courses and online components. Colleges and universities across and beyond the U.S. use the tools in developing, maintaining and reviewing their online courses and in training their faculty.