Inside the meat lab: the future of food 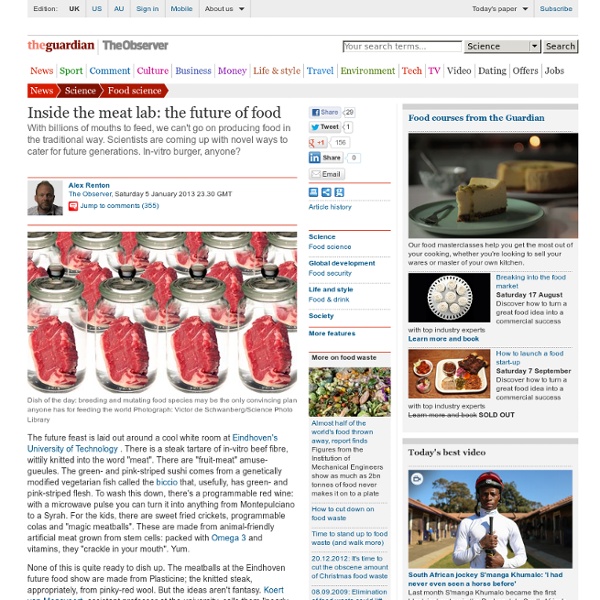 The future feast is laid out around a cool white room at Eindhoven's University of Technology . There is a steak tartare of in-vitro beef fibre, wittily knitted into the word "meat". There are "fruit-meat" amuse-gueules. The green- and pink-striped sushi comes from a genetically modified vegetarian fish called the biccio that, usefully, has green- and pink-striped flesh. To wash this down, there's a programmable red wine: with a microwave pulse you can turn it into anything from Montepulciano to a Syrah. For the kids, there are sweet fried crickets, programmable colas and "magic meatballs". None of this is quite ready to dish up. The truth, though, is that artificial steak is still a way off. This quest is key to the future of food. "It's the default thing to do, to try and replicate what you know," warns van Mensvoort. It's all Monsanto's fault. "African scientists say, 'Don't you dare bar us from this technology,'" says Fresco. Our desires in food are laden with paradox.

The antioxidant myth is too easy to swallow | Henry Scowcroft When the press release arrived in our inboxes, we knew what would happen next. A controversial Nobel laureate had stated, in a peer-reviewed paper he described as "among my most important work", that antioxidant supplements "may have caused more cancers than they have prevented". Even the most fad-friendly sections of the UK media were bound to cover the story. In reality, Professor James Watson – one of the DNA double-helix's founding fathers – was only restating what we at Cancer Research UK (along with many others) have been pointing out for years. It's a topic we at Cancer Research UK come back to again and again on our science blog and on our social media pages. This isn't going to be a Goldacresque run-down of study after study of evidence (although here's a handy Cochrane review for the nerds). One possible reason for our entrenched attitudes is the ubiquitous use of the word "antioxidants" in adverts proclaiming the health benefits of various foods and drinks.

BritainsDNA 10 amazing scientific facts about lists | Dean Burnett | Science A typical list, of a format that is very familiar to the author of this blog People like lists of things. They're everywhere on the internet. You name any subject matter you can think of, odds are there's a list about it. Nowhere is safe. Even here, on the Guardian Science section, one of the most popular articles in recent months is a list. 1. Lists are commonly used as tools for assessing people's memory. 2. Much research has been conducted into how humans store and structure their knowledge and thoughts. 3. There is an increasingly common view that internet use shortens a person's attention span. 4. A lot of lists are lists of 10, or some multiple thereof, given that the majority of humans have grown up using the decimal system. 5. Probability theories of category formation demonstrate that we tend to lump very different things together in the same category, (e.g. 6. Lists are very popular, so logically lists about popular things would be more popular again. 7. 8. 9. 10.

Susan Greenfield: Living online is changing our brains - tech - 03 August 2011 We need to talk about how the digital world might be changing our brains, says the neuroscientist and former director of the UK's Royal Institution You think that digital technology is having an impact on our brains. How do you respond to those who say there's no evidence for this? So what evidence is there? There is an increase in people with autistic spectrum disorders. Anything else? What makes social networks and computer games any different from previous technologies and the fears they aroused? Digital technologies were vindicated, in terms of our wellbeing, by the Nominet Trust report last month. I haven't met one parent or teacher who doesn't think we should be talking about this. Profile Susan Greenfield is professor of synaptic pharmacology at the University of Oxford, and former director of the UK's Royal Institution. More From New Scientist Vast glaciers carved out Martian Grand Canyon (New Scientist) Origin of organs: Thank viruses for your skin and bone (New Scientist)

What have you done with your Raspberry Pi? | Art and design It's been used to make everything from a drone boat to a miniature arcade machine, a home brewing device to a beetroot-based drumkit. Since its launch in February last year, the Raspberry Pi has become the pinup device of our open-source, hackable design world. The credit-card-sized single-board computer was originally developed as an educational tool by a group of computer scientists at the University of Cambridge, exasperated at the low level of programming skills of their applicants. Introducing first principles of computing, it was designed to get children interested in programming at an early age – but it has since proved a wild hit with tinkering techie adults, with sales reaching a million last month. Costing only $25, the diminutive computer comes with the bare minimum needed to make it work – a circuit board with a CPU, graphics processor and several pins and ports – making it the ultimate versatile tool to be adapted and manipulated.

Planck telescope maps light of the big bang scattered across the universe | Science The most detailed map ever made of the oldest light to shine through the universe has been released by scientists at the European Space Agency (ESA). The view of the heavens in red and blue speckles confirms with astonishing accuracy the theories cosmologists draw on to explain the evolution of the universe from a fraction of a second after the big bang. The map reveals tiny variations in the "cosmic microwave background" or CMB – the faint glow of radiation that is left over from the earliest light to illuminate the cosmos. These primordial photons are all around us, and account for 1% of the "snow" that could be seen on untuned television sets. The red and blue spots reveal areas where the CMB is slightly hotter or cooler than the average temperature of -270 Celsius. Scientists compiled the map from more than 15 months of observations by the ESA's Planck telescope. In the latter cases, "dark" is synonymous with "unknown". Some features of the map may take many years to explain, though.

Planck's 'almost perfect' universe could point to new physics | Science Today is a great day. The European Space Agency has released the most precise map so far of the oldest light in the universe. The best news is that is reveals an 'almost perfect universe'. While the basic 'big bang' picture of our universe's birth is confirmed, the unexplained aspects of the data are where the real excitement lies because these could be signposts to new physics. In an accompanying video, he even speculates that some of the strange data could be evidence of physics that took place before the big bang. Although now called the big bang, Belgian cosmologist Georges Lemaître, who was the first to mathematically investigate the origin of the universe, wistfully referred to it as the 'day without yesterday'. ESA say that this new map of the cosmic microwave background 'challenges some of the fundamental principles of the big bang theory.' The first strange feature is that the universe's temperature appears to fluctuate more on one side of the universe than the other.