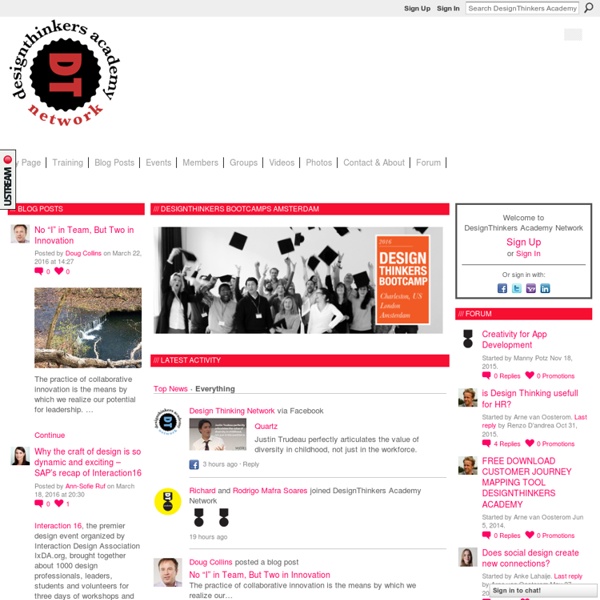 Upcycling Upcycling, also known as creative reuse, is the process of transforming by-products, waste materials, useless and/or unwanted products into new materials or products of better quality or for better environmental value. Background[edit] We talked about the impending EU Demolition Waste Streams directive. "Recycling," he said, "I call it downcycling. They smash bricks, they smash everything.

An Interview with Linda Elder: About Critical Thinking and Gifted Education - The Critical Thinking Community Interview questions provided by: Michael F. Shaughnessy Eastern New Mexico University Portales, New Mexico Randy Seevers University of Houston Clear Lake Texas Einstein's Problem-Solving Formula, And Why You're Doing It All Wrong While Einstein said he had no special talent aside from being passionately curious (and being possibly the smartest person ever), he also knew how to make time for insight--a skill that's scarce in our present cult of stimulation. Innovation consultant and author Jeffrey Phillips tells this tale: When asked how he would spend his time if he was given an hour to solve a thorny problem, (Einstein) said he'd spend 55 minutes defining the problem and alternatives and 5 minutes solving it.

Study finds big gaps between student and employer perceptions WASHINGTON -- It turns out that college students are being well-prepared for their future careers -- at least in their own minds. Ask employers, and it's a very different picture. The Association of American Colleges and Universities (AACU) asked groups of employers and college students a series of similar questions about career preparation. They could be scary reading for many students and the college educators who are trying to prepare them for careers.

5 Weird Habits That Make People Successful And Awesome Editor's Note: This is one of the most-read leadership articles of 2013. Click here to see the full list. Yes, we all need to heed our callings, follow our north stars, and not settle for jobs, but pursue careers. Thing is, during anyone's career, sometimes it gets weird—and getting weird can pay off. Over at Forbes, Jason Nazar gets it done. (Warning: these practices may work for these people, but this writer takes no responsibility for the strangeness that may cause in your life. Critical Thinking and Technology H ow do we get students to think critically? How do we get them to take an interest in our disciplines, to move beyond a concern with "just making the grade" or merely preparing for some standardized test that guards the gates to graduate and professional schools? How do we arouse their curiosity?

How Reframing A Problem Unlocks Innovation Editors’ note: The following is an adapted excerpt of InGenius (Harper One) by Tina Seelig. What is the sum of 5 plus 5?" "What two numbers add up to 10?" The first question has only one right answer, and the second question has an infinite number of solutions, including negative numbers and fractions. These two problems, which rely on simple addition, differ only in the way they are framed.

5 Paths To Doing Great Work At A Terrible Company What can I say? I needed the money. My kids were small, my own agency had just ground to a halt, and I needed a job--tomorrow. The phone rang. A headhunter told me about a place that wanted me for a ton of money and I could start right away. The only catch: It was a dreadful, dreadful advertising agency.

Pasta&Vinegar New topic, new project line here: the repair and maintenance practices of electronic objects. Nothing fancy so far, I'm just writing a research grant. But, as usual, it's hard not to start the project before getting the grant. Maybe the grant writing is already the beginning of the project, which is a common situation these days when you're on foot in academia and one foot out. Anyway. I'm collecting material (research reports, papers, articles, et al.) and doing a little bit of field observation.