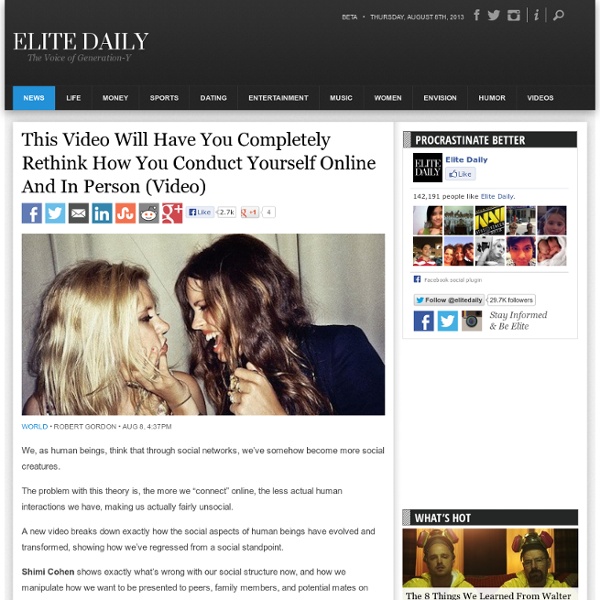 World• Robert Gordon • We, as human beings, think that through social networks, we’ve somehow become more social creatures. The problem with this theory is, the more we “connect” online, the less actual human interactions we have, making us actually fairly unsocial. A new video breaks down exactly how the social aspects of human beings have evolved and transformed, showing how we’ve regressed from a social standpoint. Shimi Cohen shows exactly what’s wrong with our social structure now, and how we manipulate how we want to be presented to peers, family members, and potential mates on social media, rather than having vulnerable and genuine conversations in real time. Check out this video below, and take a moment to truly assess how you conduct yourself, both online and in person. Top Photo by Brittny Moore Related:  Communications

generational audience habits News organizations have been confronting the problem of a shrinking audience for more than a decade, but trends strongly suggest that these difficulties may only worsen over time. Today’s younger and middle-aged audience seems unlikely to ever match the avid news interest of the generations they will replace, even as they enthusiastically transition to the Internet as their principal source of news. Pew Research longitudinal surveys find that Gen Xers (33-47 years old) and Millennials (18-31 years old), who spent less time than older people following the news at the outset of their adulthood, have so far shown little indication that that they will become heavier news consumers as they age. Notably, a 2012 Pew Research national poll found members of the Silent generation (67-84 years old) spending 84 minutes watching, reading or listening to the news the day before the survey interview. Younger generations just don’t enjoy following news Older Americans’ habits show little change

New York Times Taco Porn Article Maybe we're wrong here, but this New York Times article about the city's best tacos is a little, uh, spicy. In fact, if you can forgive us a horrible pun, it's reading to us a little like 50 Shades of Salsa right about now. Even with taco euphemisms and hot sauce aside, food writer Ligaya Michan's taco-rotica has managed to turn long-cooked pork into a sploosh-worthy aphrodisiac. And don't even get us started on the pineapple. So, without further ado, here are the sexiest lines about our favorite Mexican street snack. -"What I seek are tacos in their purest primal form." -"workmen’s tacos, built on two warm, supple corn tortillas" -"flamboyant longaniza" -"fit in the palm of your hand, folded around long-cooked meat" -"beef that has been salted and sun-dried, then sautéed to the point where it fights the jaw for just a moment, then surrenders" -"When the cook tickles the pork with a knife, the meat peels off and falls into the tortillas he holds below" -"a throb of salt"

Art that messes with your head (Look for seven horses in the picture) A Face? Or the word 'Liar'? Black Splotches? 4 Phase Fat Elimination HCG Protocol | Changing Habits Eliminate Toxic Stubborn Fat and Reset Your Metabolism the Healthy Way This is a protocol, if done properly changes lives and health. It reduces weight quickly and efficiently and I’m so excited to roll this out. Already we’ve had phenomenal results including my own. See before and after photos of myself and friends. The benefits of this protocol, when followed correctly include, rapid and permanent weight loss, a feeling of wellbeing, increased energy, clarity of mind, a change in hormones, decrease in aches and arthritic pain. This protocol is based on the principles of fat, fat storage and fat mobilisation. Please note....we do NOT recommend this protocol for anyone who is breast feeding or pregnant! Any queries regarding medications diabetes and others please see the F and Q's at the end of this page. Here's a short video from Cyndi explaining why she has introduced this protocol to Changing Habits Did you know that there are three types of fat? Testimonials Ingredients: Package 1 Package 2

Support » Two pages where I post Having two different posting pages is pretty simple. I'm not the best at explaining things, but it isn't very hard at all. Now, when you write a post, you get to choose a category to put it under. Lets say you write a post and you want to put it under the category, My Category 1, Well, if you go to your wordpress website and type in or depending upon how you have your permalinks setup under the admin setting, (you can also just go to your post page, and normally the post will say something like this: posted under My Category 1 you will see all the posts for that specific category. So what we want to do now is have that archive page to be the other page for posting post. Now, You have done it. But we still have every thing that shows up on the My Category 1 page, on your other post page. Here's how to fix that. in the main index template (index.php), look for the php code for the post. <? add this: the number is the category id. /%postname%/ I hope this helps.

generational Media Consumption It is considered intuitive that younger people use more diverse devices than older people in order to consume media – but does that mean older adults don’t use any technology to get their news or enjoy television shows and movies? As our world and news cycle becomes faster-paced, in what ways are older generations making attempts to keep up with new media platforms? And how much further ahead of the curve are younger generations, really? To answer these questions, Scarborough reveals the ways American adults are consuming media across platforms and across generations. Millennials* are at the front of the technology curve in terms of device usage, but what is critical to note is that, despite using less “traditional” platforms to consume media, they are still accessing similar types of information as other generations. For Baby Boomers*, radio and newspaper are the desired methods for media consumption, though the devices they use for these activities are perhaps surprising.

New interview with Christopher Paolini touches on how the Cycle may have been different, Book 5, and the Nameless One | Shur'tugal – The official Inheritance Cycle fan community The new interview with Christopher focuses largely on how the Inheritance Cycle may have been different, what we can expect from Book 5 and beyond, as well as what Jeod meant about Angela, Tenga, and the Nameless One/Nameless Shadow in his letter included in the Deluxe Edition of Inheritance. Can you give us any hint on what color dragons Saphira may have?Saphira could have children of any color. It would depend partly on who her partner was and partly on their ancestry.Could Oromis have joined his mind with Glaedr’s Eldunari before dying in order to stick around for longer?While perhaps theoretically possible, such a transference would be enormously difficult in the best of circumstances, much less in the middle of battle.