Dr. Sanjay Gupta: Why I changed my mind on weed 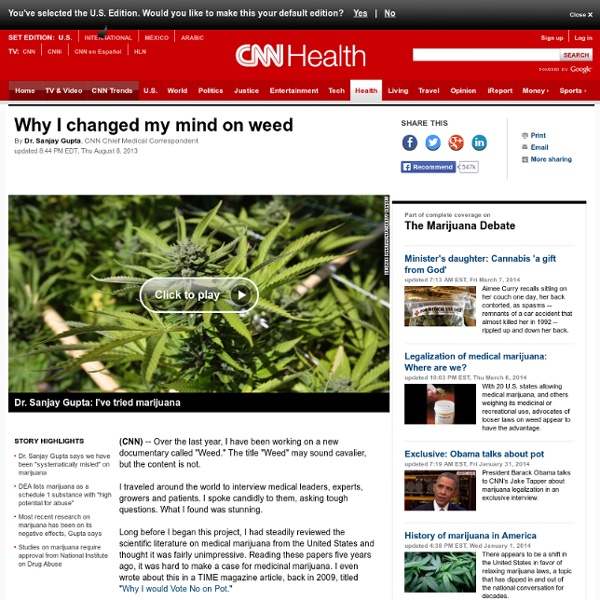 Dr. Sanjay Gupta says we have been "systematically misled" on marijuanaDEA lists marijuana as a schedule 1 substance with "high potential for abuse"Most recent research on marijuana has been on its negative effects, Gupta saysStudies on marijuana require approval from National Institute on Drug Abuse (CNN) -- Over the last year, I have been working on a new documentary called "Weed." The title "Weed" may sound cavalier, but the content is not. I traveled around the world to interview medical leaders, experts, growers and patients. Long before I began this project, I had steadily reviewed the scientific literature on medical marijuana from the United States and thought it was fairly unimpressive. Well, I am here to apologize. I apologize because I didn't look hard enough, until now. Instead, I lumped them with the high-visibility malingerers, just looking to get high. Dr. Medical facts of Marijuana WEED: A Dr. I hope this article and upcoming documentary will help set the record straight.

The History of FDA Control of Your Body | Patients for Stem Cells May 18th, 2013 (Click image to watch video) For the first time in history the FDA has encroached into the practice of medicine. The FDA made autologous adult stem cell therapy subject to the same regulatory oversight as mass-produced pharmaceutical agents. In the early 1990’s, the cells in your body were like any other body part that could be used by a physician and moved from one area to the next. In the late 1990s, the FDA proposed that the cells in your body should be made drugs. The FDA, without the proper notice and comment making period required by the Administrative Procedures Act, made a one word midnight change in the 2006 federal register. Up until 2008, it was assumed that FDA only meant to apply it’s rules to pharma companies who were processing cells. In 2010 and 2011, the FDA decided to place fat tissue processed at the patient’s bedside to release stem cells into the same category as prescription drugs. Share this page with your friends. Like this: Like Loading...

300+ Mind Expanding Documentaries I watch a lot of documentaries. I think they are incredible tools for learning and increasing our awareness of important issues. The power of an interesting documentary is that it can open our minds to new possibilities and deepen our understanding of the world. On this list of mind expanding documentaries you will find different viewpoints, controversial opinions and even contradictory ideas. Critical thinking is recommended. Watching documentaries is one of my favorite methods of self education. Explore the wonder and interconnectedness of the biosphere through the magic of technology. HomeHow Many People Can Live on Planet EarthThe Magical ForestAnts: Nature’s Secret PowerMt. Learn about all the amazing things that people create with their imaginations. The modern school where young minds are moulded into standardized citizens by the state. The Internet is now the driving force behind change and innovation in the world. We are at the dawn of a new golden age of human inventiveness.

The Lost Cycle of Time EmailShare 1513EmailShare By: Walter Cruttenden Ancient cultures around the world spoke of a vast cycle of time with alternating Dark and Golden Ages; Plato called it the Great Year. Most of us were taught that this cycle was just a myth, a fairytale, if we were taught anything about it all. We all know the two celestial motions that have a profound effect on life and consciousness. The third celestial motion, the precession of the equinox, is less understood than the first two, but if we are to believe ancient cultures from around the world, its effect is equally transformative. Giorgio de Santillana, former professor of the history of science at MIT, many ancient cultures believed consciousness and history were not linear but cyclical, rising and falling over long periods of time. Precession Observed The observation of Earth’s three motions is quite simple. A hypothesis then for how consciousness might be affected by such a celestial cycle can be built on the work of Dr.

Scientists replicated 100 recent psychology experiments. More than half of them failed. Replication is one of the foundational ideas behind science. It's when researchers take older studies and reproduce them to see if the findings hold up. Testing, validating, retesting: It's all part of the slow and grinding process to arrive at some semblance of scientific truth. Yet it seems that way too often, when we hear about researchers trying to replicate studies, they simply flop or flounder. Some have even called this a "crisis of irreproducibility." The results of this study may actually be too generous "The results are more or less consistent with what we've seen in other fields," said Ivan Oransky, one of the founders of the blog Retraction Watch, which tracks scientific retractions. "I say this because the 100 assessed studies were all published in the best journals, so one would expect the quality of the research and the false rates to be higher if studies from all journals were assessed," he said. Just listen to how difficult it was to repeat just one experiment

Gene switch may repair DNA and prevent cancer A team of scientists in Japan has found that a DNA modification called 5hmC - thought to be involved in turning genes on and off - localizes at sites of DNA damage and repair. They also found that a family of recently discovered enzymes, called TETs for short, is important in maintaining 5hmC's reparative role. To turn genes on or off, a methyl group can be added to or removed from DNA. During the removal of this chemical tag, called demethylation, the methyl group is converted to 5hmC as an intermediate step. The TET enzymes are thought to be critical to the demethylation process. Recent research has shown that 5hmC is associated with an "opening up" of nearby chromatin, the tightly packaged assembly of proteins and DNA in the cell nucleus. The team reveals in the journal Cell Reports that 5hmC localizes near breaks in DNA that develop naturally or that are caused by DNA-damaging drugs or irradiation. For further information contact: Disclaimer: AAAS and EurekAlert!

Biologists discover electric bacteria that eat pure electrons rather than sugar, redefining the tenacity of life Some intrepid biologists at the University of Southern California (USC) have discovered bacteria that survives on nothing but electricity — rather than food, they eat and excrete pure electrons. These bacteria yet again prove the almost miraculous tenacity of life — but, from a technology standpoint, they might also prove to be useful in enabling the creation of self-powered nanoscale devices that clean up pollution. Some of these bacteria also have the curious ability to form into ‘biocables,’ microbial nanowires that are centimeters long and conduct electricity as well as copper wires — a capability that might one day be tapped to build long, self-assembling subsurface networks for human use. As you may recall from high school biology, almost every living organism consumes sugar to survive. When it gets right down to it, everything you eat is ultimately converted or digested into single molecules of glucose. Without going into the complexities of respiration and metabolism (ATP!)

Who controls the agreed upon reality through the mainstream media and why they fear disclosing the truth about the extraterrestrial reality? What is the “agreed upon reality”? It is your perception of the world around you. This begins to take form from the moment of your birth and over the years through the indoctrination of information from everything from your school education to what you see on television and movies. All this information helps to form your perception of the world, but have you noticed that every so often there appears to be an unexplainable glitch in that reality? JP Morgan, Rockefeller and Warburg (33° Freemason) New York City Mayor John F. "In March, 1915, the J.P. ...They found it was only necessary to purchase the control of 25 of the greatest papers...An agreement was reached. 1919 - Mediumship delivers technology of circular flying-machine plans eventually to be developed by the Nazis Technology instructions for the creation a circular flying-machine was being received by Maria Orsic, a gifted medium who was the leader of the Vrilerinnen, a team of psychic girls serving the Vril Gesellschaft.