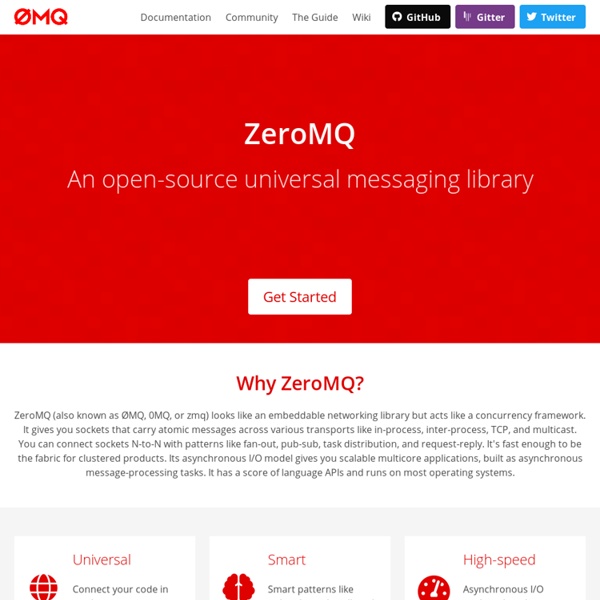 Great Democratizer Diffbot Comes Out of Beta With 50,000 Free Monthly Calls Diffbot has come out of beta announcing the APIs ability to extract content from sites that fit into two page-types: article and front page. The Diffbot engine can determine, just by rendering and looking at a page, what type of page it is. Is it an article or a front page news site? Maybe it’s a profile page from a social network. This release is just the tip of the iceberg. Diffbot will be a great democratizer. I had the great pleasure of talking with Diffbot CEO and Co-Founder Mike Tung earlier this week. Diffbot’s function could come to be a double edged sword. The Diffbot API is one of 9 extraction APIs, surely a space that is poised for growth as dawn of ‘the internet for robots’ continues. Both comments and pings are currently closed.

Celery - The Distributed Task Queue Highly Scalable First look: Mozilla's Boot2Gecko mobile platform and Gaia UI Mozilla launched a new project last year called Boot2Gecko (B2G) with the aim of developing a mobile operating system. The platform's user interface and application stack will be built entirely with standards-based Web technologies and will run on top of Gecko, the HTML rendering engine used in the Firefox Web browser. The B2G project has advanced at a rapid pace this year and the platform is beginning to take shape. The B2G team at Mozilla is preparing to give a demo of the platform's user experience at the upcoming Mobile World Congress (MWC) event. According to a roadmap recently published by Mozilla, the B2G project could potentially reach the product stage by the second quarter of 2012. The B2G platform consists of three main layers. The Linux kernel that is used in Gonk is said to be "reasonably close" to upstream Linux. The wireless modem functionality is implemented in a radio interface layer (RIL) daemon, which B2G will interact with through a simple proxy process.

Examples — Eventlet v0.9.13.dev1 documentation Here are a bunch of small example programs that use Eventlet. All of these examples can be found in the examples directory of a source copy of Eventlet. Web Crawler examples/webcrawler.py #! WSGI Server examples/wsgi.py """This is a simple example of running a wsgi application with eventlet.For a more fully-featured server which supports multiple processes,multiple threads, and graceful code reloading, see: import eventletfrom eventlet import wsgi def hello_world(env, start_response): if env['PATH_INFO'] ! Echo Server examples/echoserver.py #! Socket Connect examples/connect.py """Spawn multiple workers and collect their results. Multi-User Chat Server examples/chat_server.py This is a little different from the echo server, in that it broadcasts the messages to all participants, not just the sender. Feed Scraper examples/feedscraper.py This example requires Feedparser to be installed or on the PYTHONPATH. Port Forwarder examples/forwarder.py Recursive Web Crawler

LG reportedly building first Boot2Gecko phone as Mozilla preps app store Mozilla's Web-centric Boot2Gecko (B2G) mobile platform is maturing at a rapid pace. As we reported earlier this month, the operating system has already attracted hardware partners and will be demoed at the upcoming Mobile World Congress event. Mozilla is also planning to unveil its new application storefront, called the Mozilla Marketplace, which will allow third-party developers to sell applications that are built with standards-based Web technologies. A new report from ExtremeTech cites anonymous sources who say that LG is one of Mozilla's hardware partners. The initial developer product will give B2G contributors and application developers a real-world hardware environment for testing their work. As we explained in our previous coverage, B2G pairs Mozilla's Gecko HTML rendering engine with the Linux kernel. Unlike Android, which is developed largely behind closed doors with periodic code drops, the B2G platform is being created entirely in the open.