Top 10 Cannabis Studies the Government Wished it Had Never Funded 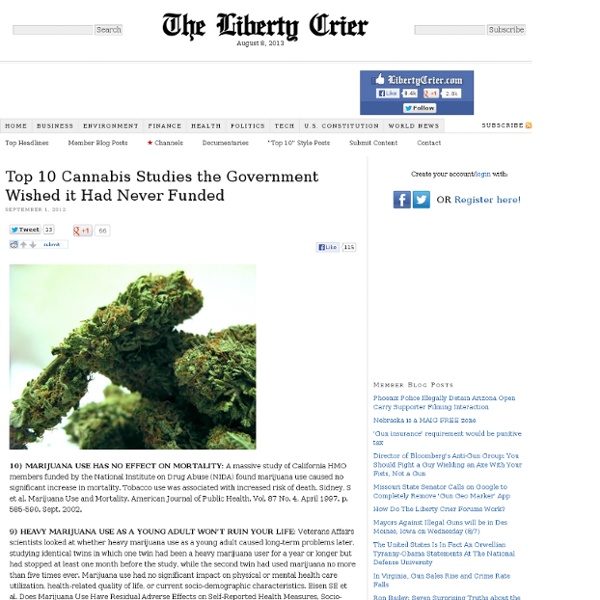 Church of Lucifer Marijuana legalization does not increase probability of use, according to researchers Jun 18, 2012 With several states, including Michigan, Missouri, Montana, Nebraska, Oregon, Washington and Colorado, considering lifting the prohibition of marijuana, and the acceptance of medical marijuana growing, counter-arguments loom over whether legaization will increase probability of use amongst high school students. Not so, says Daniel I. Rees, a professor of economics at the University of Colorado Denver. “There is anecdotal evidence that medical marijuana is finding its way into the hands of teenagers, but there’s no statistical evidence that legalization increases the probability of use.” Rees teamed with two other economics professors, Benjamin Hansen, assistant professor of economics at the University of Oregon and D. “This result is important given that the federal government has recently intensified its efforts to close medical marijuana dispensaries,” said Hansen. Wait, that’s absurd: everyone aside from the marijuana industry and its smokers are being dishonest.

Global war on drugs 'has failed' say former leaders 2 June 2011Last updated at 09:30 Opiate use rose by 35% worldwide from 1998-2008, in spite of anti-drug efforts The global war on drugs has "failed" according to a new report by a group of politicians and former world leaders. The Global Commission on Drug Policy report calls for the legalisation of some drugs and an end to the criminalisation of drug users. The panel includes former UN Secretary General Kofi Annan, the former leaders of Mexico, Colombia and Brazil, and the entrepreneur Sir Richard Branson. The US and Mexican governments have rejected the findings as misguided. The Global Commission's 24-page report argues that anti-drug policy has failed by fuelling organised crime, costing taxpayers millions of dollars and causing thousands of deaths. It cites UN estimates that opiate use increased 35% worldwide from 1998 to 2008, cocaine by 27%, and cannabis by 8.5%. Cesar Gaviria said the US came in for criticism 'No harm to others' Continue reading the main story Analysis Adam MynottBBC News

Marijuana legalization support at record high A man smokes a joint at a pro-marijuana "4/20" celebration in front of the state capitol building April 20, 2010, in Denver. Getty Images Never before have more Americans believed legalizing marijuana was the right course for the country. In a new Gallup poll, 50 percent of respondents in a nationwide survey said they believed it was time to make pot legal. About 46 percent came out against it. Support for legalizing marijuana tended to be stronger among younger, more liberal groups, according to Gallup. In a release, Gallup writes: "When Gallup first asked about legalizing marijuana, in 1969, 12 percent of Americans favored it, while 84 percent were opposed. 4 Americans get medical pot from the fedsStudy: LA pot clinics shut down, crime went upCalif. braces for medical marijuana crackdown If the steady climb in public support for marijuana legalization continues at its current pace, politicians will soon have to address the laws that fly in the face of that movement in opinion.

Washington State Medical Marijuana Availability Could Jinx Recreational Pot Market By Jonathan Kaminsky OLYMPIA, Washington, May 15 (Reuters) - Key officials helping to create Washington state's potentially lucrative recreational pot market say its success may hinge on preventing consumers from choosing to get high on readily available medical cannabis because of low and sometimes nonexistent taxes on it. The officials say it may be necessary to raise taxes or impose more stringent rules on medical pot to avoid undercutting the new recreational market and the tax dollars it is expected to inject into state coffers. Many "patients," they say, are in reality heavy recreational users who fake or exploit their maladies. The idea of changing the rules for medical marijuana alarms some patients and providers of the drug as medicine. Under current state law, a range of medical professionals, including naturopaths and even some nurses can recommend marijuana for health problems ranging from cancer to persistent pain. Brian E. Such talk horrifies many medical marijuana providers.

Legalizing Marijuana Could Save Thousands of Lives - Megan McArdle - Business [Adam Ozimek] A recent op-ed in the New York Times by Sylvia Longmire tries to lower expectations for what legalization of marijuana could accomplish. It's all fine and good and be realistic, but I think the author oversells her pessimism. Here is her summary of the argument she is attempting to counter: "FOR a growing number of American policy makers, politicians and activists, the best answer to the spiraling violence in Mexico is to legalize the marijuana that, they argue, fuels the country's vicious cartels and smugglers. After all, according to official estimates, marijuana constitutes 60 percent of cartels' drug profits. There are several debatable issues here, but she is mostly disagreeing with the notion that the "power and influence" of cartels would be "undermined" by legalization of marijuana. Her main counterpoints can be summarized as: 1) They will still have 40% of their profits from other activities. 2) They could enter the legal marijuana market.

Cannabis Can Kick Cancer's Ass Actually it’s the cannabinoids (the chemicals in cannabis) that fight cancer cells. In the past nine years, there have been over 20 major studies that these cannabanoids actually arrest cancer growths of many different forms of cancer, including brain, melanoma and breast cancer. There is evidence that cannabinoids cause direct anti-tumor activity. The side effects associated with cannabis, compared with all other current drug therapies, is classified as “low risk”. You’d think that if 800 well respected Scientists concur that indeed, cannabis does have medicinal value, our Federal Government would support it’s medical use and further research, but sadly they are not. What can the governemt do to show it’s citizens that are stricken with illnesses such as cancer, MS and Chron’s Disease? Medical cannabis, has been used for centuries as a natural treatment for many conditions,until we created pot prohibition in 1937. Original Story Source More Medical Marijuana News from Around the Web:

Colorado, Washington hope to bring in millions from marijuana taxes but the actual revenue picture is uncertain. A caregiver picks out a marijuana bud in Denver. Colorado and Washington state want more tax revenue from legal recreational use, but will it fall short? (AP) When Colorado and Washington voted to legalize marijuana for recreational use, supporters sold the idea partially based on new tax revenue estimates that ranged as high as $2 billion over five years. But recent reports and analyses offer some advice: Don't spend that money yet. “Nobody has any idea (about revenue),” said Jeffrey Miron, a Harvard economist and analyst at the libertarian Cato Institute. While many states have legalized marijuana for medical use, nationwide recreational legalization is not likely anytime soon. In a widely cited study of the Colorado law, the Colorado Center on Law and Policy predicted that marijuana legalization would produce $60 million annually in new revenue and savings for the state each year until 2017. The first $40 million of the excise tax revenue is dedicated to school construction. U.S.

Infographic - Why Are Pot Smokers Skinny? New Research on Weight & Marijuana As seen at Number 1 on Visual.ly! Embed This Graphic! More than 4,600 people participated in the study. Waist circumference and other weight-related factors were assessed in those who currently are marijuana users, those who used but don’t anymore, and those who never used. When studied, those factors led to some of the most surprising results. It is hoped that further research into the subject will be able to determine whether the differences found by the study are a direct result of marijuana use. Also Read: Which is Worse: Soda or Marijuana? Fatty Foods Trigger Marijuana-Like Experience Dopamine is the Trigger for Food Addiction July 8th, 2013

Cop's Marijuana Legalization Question Gets First Place in White House Video Contest President Obama to Answer Top-Voted YouTube Questions on Monday WASHINGTON, DC -- A question advocating marijuana legalization from a retired LAPD deputy chief of police won twice as many votes as any other video question in the White House's "Your Interview with the President" competition on YouTube this weekend. President Obama is slated to answer some of the top-voted questions on Monday. The marijuana question, submitted by Stephen Downing, a board member for Law Enforcement Against Prohibition (LEAP), is as follows: "Mr. President, my name is Stephen Downing, and I'm a retired deputy chief of police from the Los Angeles Police Department. From my 20 years of experience I have come to see our country’s drug policies as a failure and a complete waste of criminal justice resources. Downing's question came in first place for video questions and ranked second out of all questions (with the overall top spot going to a text question about copyright infringement).

The IRS War on Medical Marijuana Providers [FEATURE] special to Drug War Chronicle by investigative reporter Clarence Walker, cwalkerinvestigate@gmail.com Dispensaries providing marijuana to doctor-approved patients operate in a number of states, but they are under assault by the federal government. SWAT-style raids by the DEA and finger-wagging press conferences by grim-faced federal prosecutors may garner greater attention, but the assault on medical marijuana providers extends to other branches of the government as well, and moves by the Internal Revenue Service (IRS) to eliminate dispensaries' ability to take standard business deduction are another very painful arrow in the federal quiver. The IRS employs Section 280E, a 1982 addition to the tax code that was a response to a drug dealer's successful effort to claim his yacht, weapons purchases, and even illicit bribes as business expenses. The provision can be used to great effect. It's going to be an uphill battle. It's a brake on the overall economy, Aldworth said.

Cannabis foods Various cannabis foods on display in Amsterdam Nomenclature[edit] There are many different names and slang terms for the recipes. Ingredients and effects[edit] Tetrahydrocannabinol (THC) is generally considered to be the primary active substance in cannabis. The oil-solubility of cannabis extracts has been known since ancient times, when Sanskrit recipes from India required that the cannabis be sautéed in ghee before mixing it with other ingredients.[1][3] Making a tea by boiling cannabis in water is a highly inefficient way to extract cannabinoids, although if the cannabis is of good quality and has plenty of resin on the outside, a portion of resin can be softened by the heat and float out into the water. A cookie containing medical grade cannabis Oil[edit] "Cannaoils" or "marijuana oils" are cooking oil based products that have been infused with cannabinoids. Butter[edit] Making cannabutter Liqueurs[edit] Hash cookie[edit] Space cookies advertisement on Don Det, Laos The writer Alice B.