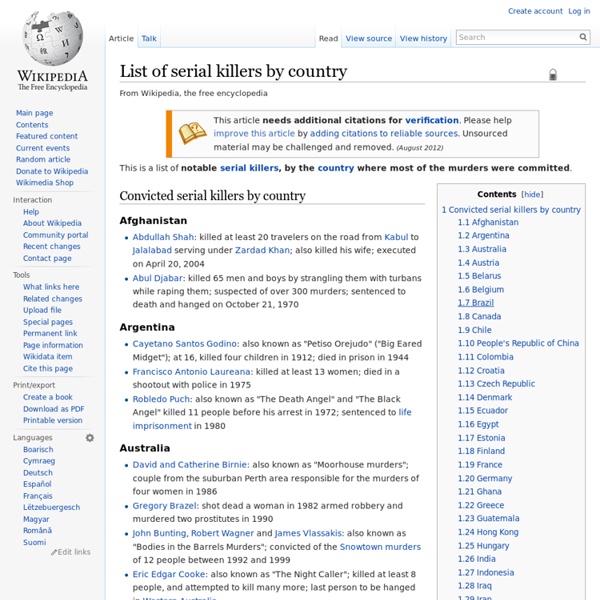 UK | Profile: UK serial killers As the bodies of five dead women are found in Ipswich, Suffolk, within two weeks, fears are growing that a serial killer is on the loose. How does this compare to past serial killers in the UK? Through the late 1970s and early 80s, women in the north of England feared a killer known both as the Yorkshire Ripper and Wearside Jack. The killer, who it later emerged was a Bradford man called Peter Sutcliffe, is serving life for the murders of 13 women in West Yorkshire between 1975 and 1981. Sutcliffe, now 60, also carried out attacks on seven other women during that period. It is not known what sparked his attacks. Sutcliffe, who struck in Yorkshire and Manchester, claimed at his trial that he had heard "voices from God" telling him to go on a mission to rid the streets of prostitutes. The case only came to the attention of the national press in June 1977 when Sutcliffe claimed the life of Jayne MacDonald, a 16-year-old shop assistant who was not a prostitute.

Teen dating violence Definition[edit] Teen dating violence is defined as the physical, sexual, psychological, or emotional violence within a dating relationship.[1] According to the United States public health authority, Centers for Disease Control and Prevention, the prevalence of teen dating violence is often misunderstood.[1] In a 2009 survey, the CDC reports that 9.8% of high school students in the U.S. report that they have been deliberately physically hurt by their boyfriend or girlfriend in the preceding 12 months. Also, 1 in 5 women, and around 1 in 7 men, who have been a victim of rape, physical violence, and/or stalking by an intimate partner, typically experience a form of dating violence between the ages of 11 and 17.[1] Characteristics[edit] The ages between 16 and 24 are the most susceptible to dating violence. Also, according to the CDC, one in ten teens will be physically abused between the grades of seventh through twelfth. United States[edit] Prevalence of teen dating violence[edit]

Dating abuse Dating abuse or dating violence is defined as the perpetration or threat of an act of violence by at least one member of an unmarried couple on the other member within the context of dating or courtship. It is also when one partner tries to maintain power and control over the other through abuse/violence. This abuse/violence can take a number of forms: sexual assault, sexual harassment, threats, physical violence, verbal, mental, or emotional abuse, social sabotage, and stalking. It can include psychological abuse, emotional blackmail, sexual abuse, physical abuse and psychological manipulation.[1] Dating violence crosses all racial, age, economic and social lines. Profiles of abuser and victim[edit] Individuals of all walks of life can find themselves in an abusive relationship. Strauss (2005)[5] argues that while men inflict the greater share of injuries in domestic violence, researchers and society at large must not overlook the substantial minority of injuries inflicted by women.

Psychological manipulation Psychological manipulation is a type of social influence that aims to change the perception or behavior of others through underhanded, deceptive, or even abusive tactics.[1] By advancing the interests of the manipulator, often at another's expense, such methods could be considered exploitative, abusive, devious, and deceptive. Social influence is not necessarily negative. For example, doctors can try to persuade patients to change unhealthy habits. Social influence is generally perceived to be harmless when it respects the right of the influenced to accept or reject and is not unduly coercive. Depending on the context and motivations, social influence may constitute underhanded manipulation. Requirements for successful manipulation[edit] According to psychology author George K. Consequently, the manipulation is likely to be accomplished through covert aggressive (relational aggressive or passive aggressive) means.[2] How manipulators control their victims[edit] According to Braiker[edit]