Here's What Happens When You Mix Soap, Oil & Ink Together 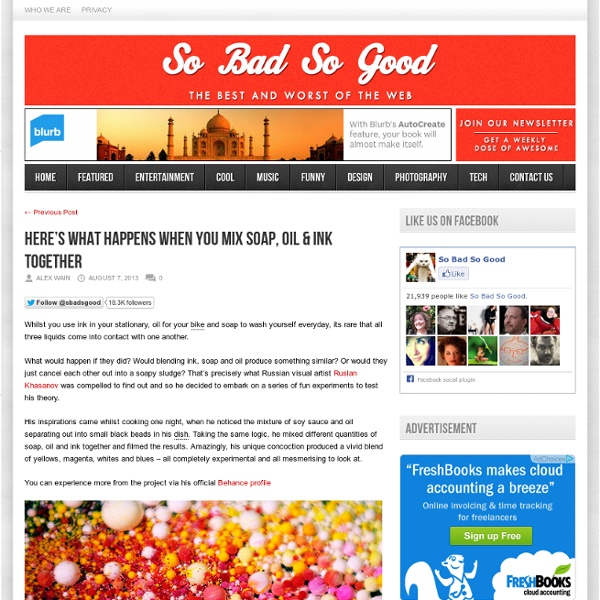 Whilst you use ink in your stationary, oil for your bike and soap to wash yourself everyday, its rare that all three liquids come into contact with one another. What would happen if they did? Would blending ink, soap and oil produce something similar? Or would they just cancel each other out into a soapy sludge? That's precisely what Russian visual artist Ruslan Khasanov was compelled to find out and so he decided to embark on a series of fun experiments to test his theory. His inspirations came whilst cooking one night, when he noticed the mixture of soy sauce and oil separating out into small black beads in his dish. You can experience more from the project via his official Behance profile Via Behance Related:  jadedunicorn

From Intent.com: I Intend to Love Without Expectation I watch the people in my life chase after the elusive and I totally get it. But so much heartbreak is wrapped up in people not meeting your expectation- not saying the right words, not doing the right thing, not being in the right place at the right time. It’s unrealistic and it’s unfair. This week my intention is to love without expectation. One of my favorite authors, Eugene Peterson, wrote: “Every day I put love on the line. All this is hazardous work; I live on the edge of defeat all the time. Whoa. I don’t like the idea of holding love for ransom. Now, please don’t read this and take it to mean that abuse or neglect is something you should allow to persist in a relationship. FYI- Every Tuesday Intent.com will start to feature intents set by our users in our weekly newsletter so you can get involved!

carnovsky ex For info and pricing please contact: carnovsky@carnovsky.com Download Pdf catalog of RGB BLACK wallpapers (12 Mb) 19 Questions We Should All Ask More Often We’ve all been there before, the lull in a conversation where it’s someone’s turn to ask a question in order to keep the conversation going. Maybe it’s on a date, maybe it’s with someone you’ve just met, or maybe it’s an old friend that you’ve grown distant from and are trying to reconnect with. Maybe it’s not a lull in the conversation and maybe you’re trying to more deeply understand the core of another but you can’t quite figure out how to go about it. The opportunities for deeper connection and understanding come from the questions you ask. Rather than asking standards like “So, how are you?” or “Where did you grow up?” What is one of the nicest things someone has ever done for you? Recently Cataloged 10 Things I Hate About Lists 3. 10 Controversial Ways I Plan On Getting Married I just want to have fun with my friends, that is enough.

Photo, Video: Disturbing Stuffed Animal Truck IS The Work Of Banksy fullscreen Sirens of the pandas too! (Jeremy Unger / Gothamist) Banksy just posted photos of his latest piece... which IS the stuffed animal truck we were wondering about yesterday. The truck—which had the street artist's 1-800 number on it—was spotted around South Brooklyn yesterday afternoon—around 1 p.m. a tipster had told us, "It was so loud. Not sure but i think someone was in the truck banging as if the animals were trying to escape." As of 11 a.m. today the "slaughterhouse delivery truck [is] touring the meatpacking district," and then will tour citywide. And don't try tossing any tracking devices inside, as someone seems to have done with the mysterious street artist's other moving target (the waterfall and butterfly truck)—with his latest update he added this addendum: "If you're the person who stuck a tracking device on the garden truck you're now following a car service in Queens." He did admit that he didn't know where he was going next, "I just find out along the away."

Be brave. Even if you're not, pretend to be. No... #random but #inspirational by @koqoo #kkoolook series by @koqoo Speak Any Language Fluently: 6 Study Hacks From Learning German I started to learn German after a day trip to Berlin 5 years ago. I fell in love with the culture and language immediately and decided that I would be speaking German Fluently by my next birthday. My affair with the German language eventually went from romantic to reality, and we had to work together to make our relationship work. Looking back, I now realize I could have cut the time it took me to master this language in half, had I only known what I know now. I’ve assembled this list of things you MUST know before you enter into a relationship with the German language. Each tip is titled with an authentic German proverb, so that those of you who are thinking of starting soon can have a head start! Translation: Probieren geht über studieren. It’s an accepted fact that speaking a language will lead you to mastery faster than studying it out of a book. The same is true for German, with one important caveat: You cannot speak for the sake of speaking. Starting to learn German is incredibly fun.

8 | Insane Makeup Turns Models Into 2-D Paintings Of Famous Artists When we think of face painting, we usually think of clowns, county fairs and this turtle-loving zombie kid. We certainly tend not to respect it as an art: instead, it's considered a dabbling at best, the sort of medium best left to teenage girls raising money for charity during a parade by painting children’s faces. But as Russian make-up artist Valeriya Kutsan shows, there's nothing trivial about face painting. One beauty might be caked with so many metallic pastels as to resemble a Basquiat print, while another might be covered in Ben-Day dots after Lichtenstein, or even be fractured into panes like a Mondrian muse. It is truly breathtaking technique, but 2D Or Not 2D isn't Kutsan's first collaboration with Khoklov. While having a great photographer to take pictures and an expert photo editor to retouch them helps, it's quite clear that most of the skill that brings these models to life lies behind Kutsan's make-up brush. To see more of Kutsan's incredible work, see her website here.

15 Probing Questions to Help You Bust Through Limiting Beliefs You have great intentions, but you don’t follow through. You tell yourself you want change, but you’re too afraid to take action. You want a passionate life, but you meet roadblocks at every turn. At the heart of this failure to launch is a cluster of limiting beliefs and negative thoughts residing in your psyche and holding you back. You’re really just one or two thoughts away from the ability to make many positive changes in your life. When you learn to mentally and emotionally disengage from those thoughts, you will catapult your potential to do just about anything you want to do. This may sound like an outlandish claim, but you have no idea of the power and control limiting beliefs have over you and how dramatically your life can change as a result of extinguishing them. In fact, I’d be willing to bet 90% of your goals and dreams could be accomplished — if it weren’t for limiting beliefs and the incredibly powerful feelings that fuel these beliefs. 1. 2. 3. 4. 5. 6. 7. 8. 9. 10. 11. 12.