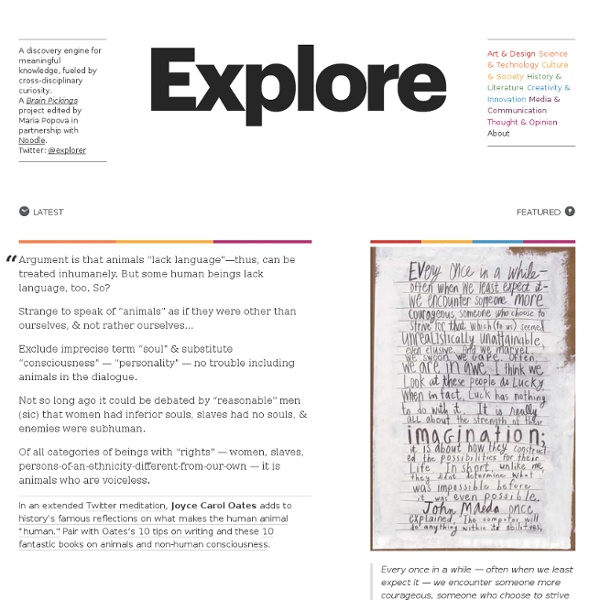 What an amazing story: Beloved children’s book illustrator Eric Carle spent his life fascinated by a photograph of him at age 3, embracing a little girl whose name he never found out. His most recent book, Friends, was inspired by that enchanting and mysterious photograph. Now, 82 years later, Carl and his little friend were reunited. On Easter Sunday, almost 82 years after the photograph was taken, Eric Carle learned his friend was not only alive. She was ready for his call. Her name is Florence Ciani Trovato; at 85, she’s a few months older than Eric, and shares his vibrancy.

Like Knows Like Lucien Zayan is French. But he is also the charming founder and director of the Invisible Dog Art Center. A raw space in a vast converted factory building with an open-ended mission: to create a new kind of interdisciplinary arts center. Neither a commercial gallery nor a concept-driven non-profit, The Invisible Dog has a unique role in the New York arts scene. Stanley Kubrick, cinephile Web exclusive Revised and expanded, 25 October 2013. Stanley Kubrick, photographed by Dmitri Kasterine in 1970 on the set of A Clockwork Orange. Credit: Dmitri Kasterine: www.kasterine.com Stanley Kubrick worked for almost half a century in the medium of film, making his first short documentary in 1951 and his last feature in 1999.

The Key to Creating Remarkable Things No one likes the feeling that other people are waiting – impatiently – for you to get back to them.At the beginning of the day, faced with an overflowing inbox, a list of messages on your voicemail, and the to-do list from your last meeting, it’s tempting to want to “clear the decks” before you start on your own most important work. When you’re up-to-date, you tell yourself, your mind will be clear and it will be easier to focus on the task at hand. The trouble with this approach is that you end up spending the best part of the day on other people’s priorities, running their errands, and giving them what they need.

22 Websites that are Beautiful and Useful Here at WDL, we like to keep you inspired by showing you beautifully designed websites every week with our web design inspirational lists. Today we decided to go a different route, and instead of picking a single “theme” of examples, we gathered examples of websites that are inspiring and useful for web designers. We gathered different tools and skill sharing websites to show you so you can be inspired and also discover a nice tool/service. From free lessons to learn how to code to monthly memberships to help you to learn more about design, in this post you will find here 22 examples of inspiring and useful websites.

10 Laws of Productivity You might think that creatives as diverse as Internet entrepreneur Jack Dorsey, industrial design firm Studio 7.5, and bestselling Japanese novelist Haruki Murakami would have little in common. In fact, the tenets that guide how they – and exceptionally productive creatives across the board – make ideas happen are incredibly similar. Here are 10 laws of productivity we’ve consistently observed among serial idea executors: 1. Break the seal of hesitation. A bias toward action is the most common trait we’ve found across the hundreds of creative professionals and entrepreneurs we’ve interviewed.

Plan Your Free Online Education at Lifehacker U: Spring Semester 2013 I know several do, and while I can't speak for all of them, the Saylor Foundation — and, full disclosure, I am employed by them — has three courses that carry portable credit recommendations, with more credit pathways in the works. The recommendation requires a proctored online exam, which can range from free to not-very-expensive depending on how you obtain a proctor. Search NCCRS from the homepage, or get in touch! I'm currently taking the Evolution class (and am enrolled for the Sci-fi class mentioned above) through Coursera. Generally, free classes do not award college credit, but I understand at least Coursera offers course completion certificates through the colleges that give the classes. Jonah Lehrer: Fostering Creativity And Imagination In The Workplace Beethoven would try as many as 70 different versions of a musical phrase before settling on the right one. But other great ideas seem to come out of the blue. Bob Dylan, for example, came up with the lyrics to the chorus for "Like a Rolling Stone" soon after telling his manager that he was creatively exhausted and ready to bail from the music industry.

James Victore: Your Work Is A Gift What’s the value of your creative voice? A lot, according to designer James Victore. Using some of his own creative challenges as examples, Victore argues that it is only through finding your voice, your fears, and your passion — and expressing them — that you can make great work. America's Forgotten Pin-Up Girl Word of the day: Zaftig /zäftig/ adjective: (of a woman) Having a full, rounded figure; plump. Meet Hilda, the creation of illustrator Duane Bryers and pin-up art’s best kept secret. Voluptuous in all the right places, a little clumsy but not at all shy about her figure, Hilda was one of the only atypical plus-sized pin-up queens to grace the pages of American calendars from the 1950s up until the early 1980s, and achieved moderate notoriety in the 1960s. “She’s a creation out of my head. I had various models over the years, but some of my best Hilda paintings I’ve ever done were done without a model,” veteran artist Duane told the online pin-up gallery Toil,