A Primer In Effective Questioning Strategies For Classroom & eLearning - 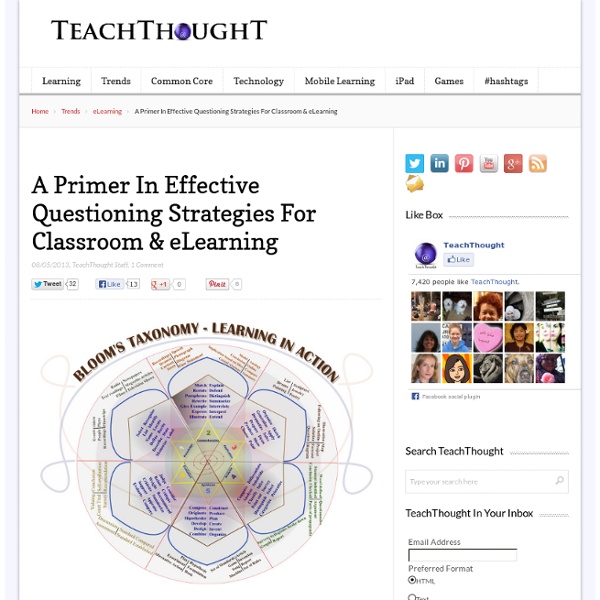 by Rosa Fattahi, WizIQ The Importance of Questioning in the Learning Process Since the ancient days of philosopher Socrates, asking questions has been a critical part of the teaching and learning process. The well-known question-and-answer technique that Socrates employed with his pupils demonstrated how well dialogue and discourse work to stimulate students, encourage more complex thinking, and help them learn. Questions are invaluable teaching tools that serve many functions in the teaching and learning processes. Assess knowledge and learningPrompt students to clarify, expand, and support their claimsDirect students to engage in discussion or debateEncourage students to question their own thought process or reasoningApply class concepts to real-world scenarios Verbal questioning is one of the most common pedagogical tools, second only to perhaps lecturing. Effective Questioning Addresses a Range of Cognitive Skills Bloom’s Taxonomy Lower vs. Rosa Fattahi is a developer with WizIQ Related:  Bloom • Research and Supervising • Education books & monographs

The 10-Minute Guide To Bloom's Taxonomy Bloom’s Taxonomy is one of the most cited theoretical constructions within education and e-learning. This is well earned since, after its first publication in 1956, the taxonomy has quickly become an important milestone within educational theory. However there are many professionals within the educational and e-learning fields that have only a vague idea of what the Taxonomy is all about, or that have only met the taxonomy (or some revisited version of these findings) for the Cognitive domain only, leaving the Affective and Psychomotor domains at the margins, if not completely out of the picture. The aim of this video is to provide a 10-minute overview of the Taxonomy for all the 3 domains: Cognitive, Affective, and Psychomotor. There is much more to explore about Bloom’s taxonomy, this video should be seen as the starting point for a journey into finding a way to organize learning objectives in a meaningful and useful way, by using the brilliant work of Bloom and his colleagues.

How To Use Bloom’s Taxonomy To Write Learning Outcomes By: Scott Davis Business Analyst, Pearson It is often quite difficult to relate inputs to outcomes in the world of education. Traditionally, much work has been done to develop and provide inputs into the process of education. These inputs, such as a textbook, an assessment, a learning technology or platform, a course, a qualification, a high-stakes test or professional development for teachers are put into the hands of an educational leader, a skillful teacher, or an eager student. And, for all of the investment, expertise, and care that go into their creation, that has typically been where the involvement ends. If we are going to really understand how we might be impacting student learning we must do two things. It may be difficult to know where to start in writing a student learning outcome. The committee identified three domains of educational activities or learning (Bloom, 1956): The domains are further subdivided, starting from the simplest behavior to the most complex. Bloom, B.

Interview with Photographer Gregory Crewdson Gregory Crewdson, an American artist renowned for his elaborately devised photographs of small-town life, digs into the commonplace and familiar to find images that are haunting, surreal and—most agree—profoundly unnerving. (Though Crewdson himself, we discovered, finds his work essentially “optimistic.”) With production teams and set budgets that rival those of entire films, Crewdson chronicles moments of disconnect—downcast eyes, faces turned away—in expansive portraits of people lost in thought, isolated and inaccessible, both to each other and to the viewer. His images are rich in detail, and there is not a thing in the frame—not a stain, not a lampshade—that he does not carefully select. The effect of this combination of visual detail and narrative restraint is that there are as many narratives possible for each of his images as there are viewers of it: each person comes to the image with their own anxieties and desires, which they project onto the scene. A selection of Mr.

A Powerful App For Every Level Of Bloom's Taxonomy Bloom’s Taxonomy has been steadily increasing its presence in my everyday reads lately. The revised version is really speaking to a lot of educators who are using it – often in concert with a variety of technologies – to address the different levels of educational objectives. (Note: If you need a quick refresher on the basics of Bloom’s Taxonomy, check out this post). Using Apps There are a ton of apps out there that address different ideas in the Bloom’s Taxonomy hierarchy. Remembering Apps that fit into the ‘remembering’ bucket include those that improve a student’s ability to identify and recall facts, define terms and concepts, and locate information. Screen Chomp is a free app that is a basic doodling board with markers. Understanding The ‘understanding’ bucket should be filled with apps that allow students to explain concepts and ideas that they have come to understand. Applying SimpleMind is mind mapping app that students (and teachers!) Analyzing Evaluating Creating

London Riots 1381: Blood-soaked Peasants' Revolt that changed England forever By Professor John Gillingham Updated: 11:10 GMT, 30 September 2011 They make for a rag-tag army. One of them is an elderly shepherd armed with nothing more deadly than his crook, another is a young boy who clings for protection to the drum with which he has bravely set the pace of their advance. Nearby, a fierce-looking youth is spattered with blood from the severed head he carries on top of a long pole. Others brandish the flaming torches with which they have set London ablaze, and in front of them stands a thick-set brute, his face glistening with sweat from the battles recently won and his sword drawn ready for those that lie ahead. Rag-tag army: The Peasants' Revolt of 1381 was the uprising that saw tens of thousands of England's poorest countrymen come close to overthrowing the establishment It is this man, Wat Tyler, whose name will go down in history. Until now, we have had only the illustrations in history books to help us picture their struggle.

Does Bloom’s Taxonomy still have a role to play in e-learning? Mayes and de Freitas (2004) state that the use of technology can be used to achieve better learning outcomes, more effective assessments or a more cost effective way of bringing learning environments to students; and that reforming practice requires transformation of the understanding of the principles. So what are the pedagogical principles behind “e” learning? The definitions of e-learning are numerous and varied but one excepted definition is "learning facilitated and supported through the use of information and communications technology", (JISC, 2003). In their report (2004) Mayes and de Freitas go on to surmise that in this framework (ie e-learning) there are no models for e-learning per se, only e-enhancements of models of learning in general. Blooms Taxonomy (1956) was developed to classify the complexity of questions asked in assessments, ultimately becoming a system for classifying learning outcomes. References Birmingham, U., 2002. Church, A., 2010. Rollins, M., 2010.

Creative Teaching and Applied Imagination by The online blogosphere provides teachers with the opportunity to reflect online and use one another to bounce-back dialogue. This reciprocal-feedback is an integral component that defines us as teachers within the profession. I would never have thought such an opportunity existed when I first started out in the classroom in 1993! In this blog, I present the process of creativity and how this may be applied to suit any given context. Context: It appears that Rachel Jones (@rlj1981) tends to get my blog-mojo working and this is a second re-buff (bounce-back) to her blog. Regarding creativity, Rachel says that: “… creativity in the classroom has been much derided by those who fail to see its potential impact.” Her response was in addition to David Didau’s blog on ‘The dark art of creativity‘, where @LearningSpy writes; “without clear knowledge of forms and ‘rules’, creativity is inevitably stifled.” As David concludes: Creative history: Creativity in teaching today? What the research says? Related

gaze | The Chicago School of Media Theory “If thou gaze long into an abyss, the abyss will also gaze into thee” — Nietzsche, Beyond Good and Evil The range of meaning of the verb “to see” is so vast that a typical thesaurus contains a list of fifty-odd synonyms, among them “to look, glimpse, eye, notice, stare, etc.” While each word involves the act of perception per se, all have slightly different shades of connotation: for example, “behold” has religious undertones, “scrutinize” involves some sort of intellect, and “gape” indicates an element of surprise. From this long list of synonyms, however, “gaze” has almost been singled out for use in discussions about art. Critics rarely theorize about simply “looking,” similarly one hardly “glares” or “peeks” at a painting. A possible explanation lies in the growing awareness/concern in the twentieth century with the implications of the gaze and its role in understanding the function of art. Jennifer Reinhardt 1 Oxford English Dictionary Online(30 January 2008). 3 Fried, 23. ——. 1973.

14 Bloom's Taxonomy Posters For Teachers 14 Brilliant Bloom’s Taxonomy Posters For Teachers by TeachThought Staff Bloom’s Taxonomy is a useful tool for assessment design, but using it only for that function is like using a race car to go to the grocery–a huge waste of potential. In an upcoming post we’re going to look at better use of Bloom’s taxonomy in the classroom, but during research for that post it became interesting how many variations there are of the original work. While a handful of the charts below only show aesthetic changes compared to others, most are concept maps of sorts–with graphic design that signifies extended function (power verbs), detail (clear explanations), or features of some sort (Bloom’s Taxonomy tasks by level). The follow simple, student-centered Bloom’s graphics were created by helloliteracy! The following “Bloom’s pinwheel” comes from Kelly Tenkley and ilearntechnology.com:

APA Formatting and Style Guide Summary: APA (American Psychological Association) style is most commonly used to cite sources within the social sciences. This resource, revised according to the 6th edition, second printing of the APA manual, offers examples for the general format of APA research papers, in-text citations, endnotes/footnotes, and the reference page. For more information, please consult the Publication Manual of the American Psychological Association, (6th ed., 2nd printing). Contributors: Joshua M. Please use the example at the bottom of this page to cite the Purdue OWL in APA. To see a side-by-side comparison of the three most widely used citation styles, including a chart of all APA citation guidelines, see the Citation Style Chart. You can also watch our APA vidcast series on the Purdue OWL YouTube Channel. General APA Guidelines Your essay should be typed and double-spaced on standard-sized paper (8.5" x 11"), with 1" margins on all sides. Major Paper Sections Title Page Running head: TITLE OF YOUR PAPER