How to Navigate by the Stars 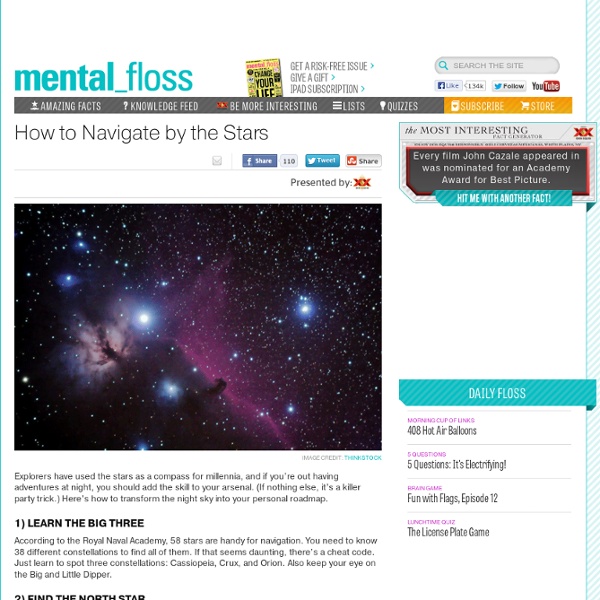 Explorers have used the stars as a compass for millennia, and if you’re out having adventures at night, you should add the skill to your arsenal. (If nothing else, it’s a killer party trick.) Here’s how to transform the night sky into your personal roadmap. 1) Learn the Big Three According to the Royal Naval Academy, 58 stars are handy for navigation. 2) Find the North Star It’s always within one degree of true north. 3) Shoot for the Moon If you can find Orion’s sword, following its point will show you south. 4) Down Under? The North Star isn’t visible below the equator. 5) Move Like a Star Like the sun, stars skate east to west. 6) Take a Survey Forgot to memorize your constellations?

What is quantum superposition? - Curiosity Quantum matter can be difficult to study. While physicists have come a long way in the research of this microscopic science, some things are still a mystery because quantum matter can behave so erratically. Einstein's theory of relativity and various other laws of physics tend to fall apart at the subatomic level of quantum physics, because photons -- or tiny particles of light -- seem to change form randomly, and possibly change simply in observation. Niels Bohr, a famous Danish physicist, proposed the Copenhagen interpretation, which revolves around quantum superposition. Quantum superposition is the term physicists use to describe the manner in which quantum particles appear to exist in all states simultaneously. Recently, scientists at the University of California, Santa Barbara, produced the first experiment in which quantum superposition in a visible object was observed.

How Humans Are Changing the Planet—in 7 Dramatic GIFs - Rebecca J. Rosen Watch as Las Vegas booms, the Amazon disappears, and Dubai grows out into the sea. Google today released an "interactive timelapse experience" that allows users to explore millions of satellite images captured over the last quarter-century -- 25 years of immense growth and destruction. "We believe this is the most comprehensive picture of our changing planet ever made available to the public," Google said in a statement. The project was built in conjunction with the U.S. "Much like the iconic image of Earth from the Apollo 17 mission--which had a profound effect on many of us--this time-lapse map is not only fascinating to explore," Google Earth's Rebecca Moore writes, "but we also hope it can inform the global community's thinking about how we live on our planet and the policies that will guide us in the future." Here are seven of the most dramatic changes, presented in GIF form.

Gobekli Tepe's Cosmic Blueprint Revealed Report by Andrew Collins author of From the Ashes of Angels (1996), The Cygnus Mystery (2006) and Beneath the Pyramids (2009) On a hilly ridge called Göbekli Tepe in the Taurus Mountains of southeast Turkey, near the ancient city of Sanliurfa, archaeologists have uncovered the oldest stone temple complex in the world. Constructed most probably during the second half of the tenth millennium BC, some 7,000 years before Stonehenge and the Great Pyramid, the site consists of a series of rings of enormous T-shaped pillars, many bearing carved reliefs of Ice Age animals, strange glyphs and geometric forms. But what exactly were these stone enclosures used for, and were they aligned to the stars? In the knowledge that megalithic monuments worldwide have been found to possess alignments towards celestial bodies, it is reasonable to suggest that something similar might have been going on at Göbekli Tepe, with the most obvious candidates for orientation being the various sets of twin pillars. 1.

DNA Phantom Effect INTRODUCTIONIn this contribution I am going to describe some observations and interpretations of a recently discovered anomalous phenomenon which we are calling the DNA Phantom Effect in Vitro or the DNA Phantom for short. We believe this discovery has tremendous significance for the explanation and deeper understandings of the mechanisms underlying subtle energy phenomena including many of the observed alternative healing phenomena [1,2]. This data also supports the heart intelligence concept and model developed by Doc Lew Childre [3,4]. (See also contributions by Rollin McCraty and Glen Rein in this volume). This new phenomenon -- the DNA phantom effect -- was first observed in Moscow at the Russian Academy of Sciences as a surprise effect during experiments measuring the vibrational modes of DNA in solution using a sophisticated and expensive "MALVERN" laser photon correlation spectrometer (LPCS) [5]. Dr. References1.

DNA trick throws ageing into reverse - health - 29 November 2010 A technique to keep the tips of your chromosomes healthy could reverse tissue ageing. The work, which was done in mice, is yet more evidence of a causal link between chromosome length and age-related disease. Telomeres, the caps of DNA which protect the ends of chromosomes, shorten every time cells divide. But cells stop dividing and die when telomeres drop below a certain length – a normal part of ageing. The enzyme telomerase slows this degradation by adding new DNA to the ends of telomeres. Mariela Jaskelioff and her colleagues at the Dana Farber Cancer Institute in Boston, Massachusetts, engineered mice with short telomeres and inactive telomerase to see what would happen when they turned the enzyme back on. Four weeks after the team switched on the enzyme, they found that tissue had regenerated in several organs, new brain cells were developing and the mice were living longer. Journal reference: Nature, DOI: 10.1038/nature09603 New Scientist Not just a website! More From New Scientist

Synthetic biology, ethics and the hacker culture Read Thomas L. Friedman’s “The World is Flat” or Neal Stephenson’s “Cryptonomicon”, and you get a glimpse into how the hacker culture that emerged at the tail end of the twentieth century revolutionized the digital world. Will a confluence of emerging technologies—including information tech, biotech, and nanotech—lead to a similar revolution in the biological world? Behind every computer screen is a complexity of software and hardware that together create a virtual world in which many of us spend more time living out our lives than is probably healthy—whether crunching numbers, playing games or churning out our latest blog. According to that fount of all knowledge Wikipedia, a “computer hacker is a person who enjoys designing software and building programs with a sense for aesthetics and playful cleverness.” Reading through a just-released report on the social and ethical challenges of synthetic biology commissioned by the U.K. This post first appeared on the SAFENANO blog in June 2008

Caltech researchers find Evidence for Nibiru - Ancient UFO Caltech researchers have found evidence of a giant planet tracing a bizarre, highly elongated orbit in the outer solar system. Is this Planet X / Nibiru? The object, which the researchers have nicknamed Planet Nine, has a mass about 10 times that of Earth and orbits about 20 times farther from the sun on average than does Neptune. At 5,000 times the mass of Pluto is sufficiently large that there should be no debate about whether it is a true planet. You can read the full paper, “Evidence for a Distant Giant Planet in the Solar System”, here. Zecharia Sitchin attributed the creation of the ancient Sumerian culture to the Anunnaki, which he stated was a race of extraterrestrials from a planet beyond Neptune called Nibiru.

Lab-Grown Vaginas Function in Patients Vaginal organs implanted in four girls are successfully functioning up to eight years later, researchers reported in the Lancet today. Four teenage girls, who were born with Mayer-Rokitansky-Küster-Hauser syndrome, in which the vagina and uterus are either underdeveloped or missing, received vaginal organs that were engineered with their own cells. The surgeries were done between 2005 and 2008, and all have reported normal functioning since then. Paralyzed People Move After Spinal Stimulation “This pilot study is the first to demonstrate that vaginal organs can be constructed in the lab and used successfully in humans,” said lead researcher Dr. Treating MRHK with the current standard procedure, reconstructive surgery or dilation of existing tissue, results in complications in as many as 75 percent of pediatric patients, the researchers said. Could Humans Be Cloned? Photo: A scaffold made of a biodegradable material around which epithelial cells are grown.

The Single Most Mind-Altering Photograph Humani... - Upworthy The Smithsonian Will Let Anyone 3D Print Recreations Of Historical Artifacts Just when you thought 3D printing was only going to be used to make guns and other stupid crap no one actually needs, the world’s largest network of museums has come up with easily the best use for the ground-breaking invention yet. Yesterday, the Smithsonian Institution in Washington D.C. introduced Smithsonian X 3D, a web portal that allows online visitors to create 3D renderings of some of its historical artifacts. According to Forbes, the Smithsonian has for months been using 3D scanners and other comparable technology to create 3D models of everything from whale fossils to Abraham Lincoln‘s head to the Wright Brothers‘ flyer. And now, this technology is open to the public. Not only is this a huge benefit for anyone who can’t make the trip out to D.C, but it is also tremendously helpful in analyzing the artifacts themselves. This video via Forbes provides an in-depth overview of the 3D process and what it could mean for the future of historical preservation and artifact analysis.

100 Documentaries To Expand Your Consciousness - Open Box Thinking - Open Box Thinking Free your mind & expand your awareness. Here is a list of over 100 documentaries you can watch for free online. They are about Science, Consciousness, ETs, you name it. It’s a smorgasbord of fascinating subjects to learn about. “If you find a video wrongly linked please let us know and we will find another to replace it. 1. This list will never be complete! Prehistoric village found in downtown Miami - Miami-Dade Archaeologists who for months have been uncovering mounting evidence of an ancient and extensive Native American village in the middle of downtown Miami have concluded it’s likely one of the most significant prehistoric sites in the United States. The archaeologists, under the direction of veteran South Florida archaeologist Bob Carr, have so far painstakingly dug up eight large circles comprised of uniformly carved holes in the native limestone that they believe to be foundation holes for Tequesta Indian dwellings dating as far back as 2,000 years. They have also discovered linear, parallel arrangements of hundreds of such postholes stretching across the site that Carr hypothesizes mark the foundation for other structures, possibly boardwalks connecting the dwellings. “What’s unusual and unique about the site is that it’s this huge chunk of land where a major part of this ancient Tequesta village site is preserved,’’ Carr said in an interview.

World’s Oldest Toy Car (7500 years ago) | Believe nothing Home > Ancient history > World’s Oldest Toy Car (7500 years ago) July 23, 2012 The world’s earliest toy car (L) and title deed, unearthed at excavation sites in Mardin’s K? Is this little ancient toy the earliest evidence of the wheel? MessageToEagle.com- Today parents buy their children electric car toys to play with, but thousands of years ago the situation was somewhat different. Yet, this ancient discovery reveals our ancestors were aware of the wheel 7500 years ago! A stone car with two axles and 4 wheels dating from about 7500 years ago was found during excavations in the Kiziltepe district of the southeastern province of Mardin, are now on display at the Mardin Museum, Turkey. Archaeologist Mesut Alp said that the toy car, which is made out of stone, dates back to the late Stone Age and is thought to be 7,500 years old. Read more: Like this: Like Loading...