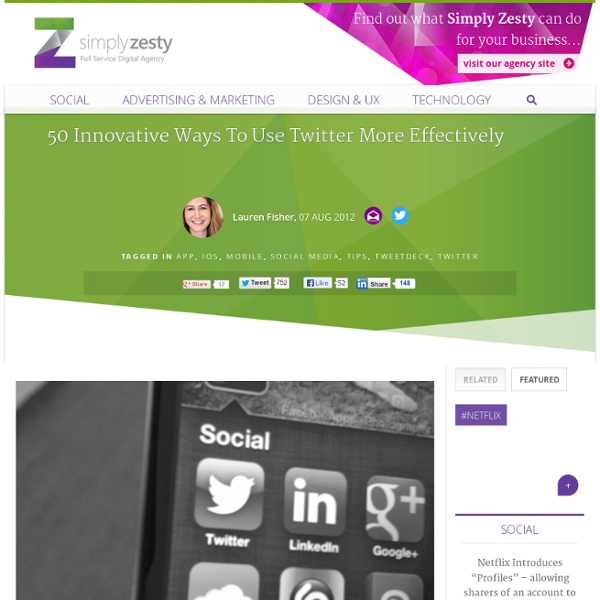 With over 170 million active users and playing a significant role in media consumption, Twitter has turned into the go-to site for real-time updates and gathering snippets of info from those we're interested in. Pretty much everyone knows how to put a tweet together and how to reply to users, but what about more advanced features such as shortcuts, apps and SEO. If you want to improve your knowledge or want to pick up a few tips and tricks to help you get more out of the service, then read on. Twitter Keyboard Shortcuts With many of us spending large amounts of time on Twitter every day, there has to be a quicker way to use the desktop interface and that comes in the form of keyboard shortcuts. App Security Over the time that you've been using Twitter, there is a very good chance that you have given some apps permission to access your account. Schedule Tweets Sometimes you can come up with a good tweet, but feel that it's not ready to be posted for the world to see. Sensitive Content Apps Related:  digital skills

Why the disenchantment with Twitter? | Technology | The Observer By any standards, Twitter is one of the wonders of the digital world. A service that didn't exist seven years ago has somehow become a central part of our media ecosystem, old and new: I can't remember when I last heard a radio programme that didn't invite me to "follow" it on Twitter, while at the opening of every conference I attend nowadays, after the obligatory notices about the location of the fire exits, there is the unveiling of the event's Twitter hashtag. So Twitter is huge. It has more than 500 million active users who send 340m tweets on an average day, and is consistently one of the top 10 websites in the world. Two-thirds of the world's top companies have an active Twitter profile. And yet when it first appeared in July 2006, it provided instant corroboration of Naughton's First Law of Innovation, which says that if the Daily Mail is baffled and/or infuriated by a new piece of technology, then the odds are that it is a really significant development.

Educators need Twitter! I read a message while following the chat at #connectedca that stated, “I’ve learned more from Twitter in the last year than in the last 5 years of PD activities.” This message was similar to one I provided at my opening address beginning this year. This does not imply that I have not attended some powerful professional development opportunities over the past five years. In fact, my learning has been positively impacted in a number of PD activities and conferences. Twitter is immediate and revolves around my time. A second aspect of the importance of Twitter deals with the overall positiveness of the conversations. I’m witnessing a number of our schools engaging in Twitter workshops.

9 Ways to Improve the Signal to Noise Ratio on Twitter inShare378 Even at 250 million Tweets per day in addition to the updates across Facebook, Google+, Pinterest, and every other feed that we willfully subscribe to, information overload is in of itself a fallacy. But the feeling the overload of information is very real and a reflection of our inability to pull the levers necessary to decrease noise and improve signal. Doing so, requires some very blatant actions that don’t simply reduce the volume of the information we don’t care to see as often, it requires disconnecting from human beings. I know…so what right? It still is what it is. Think about why you Tweet or update your status. We are as guilty by our inaction as others are for their action. So, what makes a Tweet worthy of response or sharing? While we await tools that will save us from ourselves, the research team documented nine best practices to use as an editorial guideline of sorts. 9 Ways to Improve the Signal to Noise Ratio in Social Networks 1. 2. 3. 4. 5. 6. 7. 8. 9.

Online friend or foe? | Learning out and about with tech When we advise children about being safe online, we often tell them to be aware that who they are talking to online may not be who they think. But as adults how many of us think that could happen to us? I thought I was pretty careful but along with many of my twitter friends, I was duped by someone in a rather impressive way. Why do I say impressive? Because this person maintained this false and other false identities, blogged/tweeted under this identity for over two years. During this time we have supported ‘her’ emotionally when: her mum died, she became pregnant.. with twins. This week through some mistakes by this person and some pretty good detective work by other twitter friends, it was discovered that the pictures of the twins were taken from a blog in the States and the wedding pictures were fake too. How do I feel about this?

25 Ways To Use Twitter To Improve Your Professional Development Although LinkedIn gets a lot of love as a professional social media site, Twitter is a force that can’t be ignored by up-and-coming young professionals. It’s a great place to get connected and informed, and an especially good resource for growing professionally. But how exactly can you use Twitter for professional development? Check out our list to find 25 different ways. Keep your Twitter profile employer-focused : Maximize the space that you have in your profile to share a professional description of yourself. Cash in on your good karma that you’ve earned by helping others and call in a favor yourself.

You have a Twitter account... now what? So you have a Twitter account. Great! But what's next? 1. Say who you are and why you are using Twitter. 2. Who? How I decide who to follow? 3. Time to get going! Should you tweet about matters that are not about your work or study? If you have any questions or tips for others, please post them in the comments. Remember it is fun. 25 Ways To Get The Most Out Of Twitter Twitter may very well be the single most important tool for teachers right now. Considering many are not even using the service, that says a lot about how effective the platform is for learning, engaging, development, and more. In an effort to make sure you are getting the most out of Twitter, we’ve compiled a very lengthy list of tips and tricks. See Also: 45 Simple Twitter Tips Everyone Should Know About Katie and I went through our list and narrowed it down to the top 25. Follow folks who are interesting to you. Just tweet!