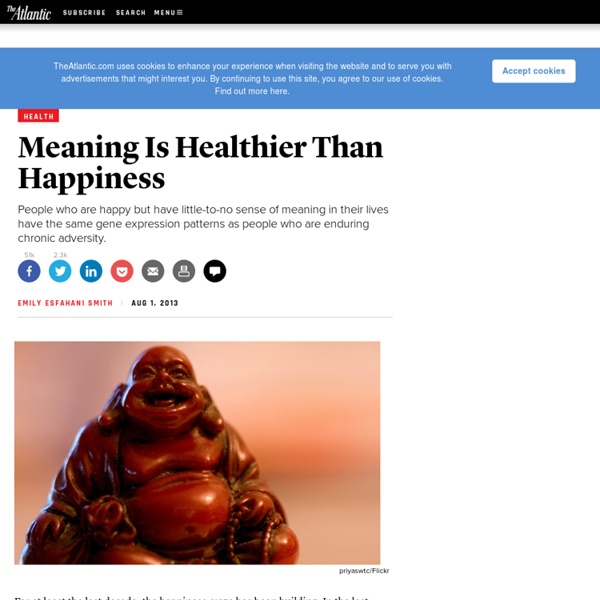 Health People who are happy but have little-to-no sense of meaning in their lives have the same gene expression patterns as people who are enduring chronic adversity. Please consider disabling it for our site, or supporting our work in one of these ways Subscribe Now > For at least the last decade, the happiness craze has been building. One of the consistent claims of books like these is that happiness is associated with all sorts of good life outcomes, including — most promisingly — good health. But a new study, just published in the Proceedings of the National Academy of Sciences (PNAS) challenges the rosy picture. Of course, it’s important to first define happiness. It seems strange that there would be a difference at all. "Happiness without meaning characterizes a relatively shallow, self-absorbed or even selfish life, in which things go well, needs and desire are easily satisfied, and difficult or taxing entanglements are avoided," the authors of the study wrote. Related:  On Being Human • Wise

What Writing Has in Common With Happiness By Heart is a series in which authors share and discuss their all-time favorite passages in literature. See entries from Jonathan Franzen, Amy Tan, Khaled Hosseini, and more. The final line of an enigmatic Jorge Luis Borges poem became the title for Yasmina Reza's latest book, Happy Are the Happy. Happy Are the Happy features 18 different narrators, each of whom gets to command the reader's attention for at least one chapter. Reza’s books—novels, plays, and an unorthodox book-length profile of Nicolas Sarkozy—have been translated into more than 30 languages. She lives in Paris and spoke to me in New York City. Yasmina Reza: Late in the process of finishing my new book, Happy Are the Happy, I started looking for a title. I was on a plane when the French phrase heureux les heureux, happy are the happy, came to mind. So when I went home, I took all my Borges off the shelf. Happy are those who are beloved, and those who love, and those who are without love. And we can never know.

Kierkegaard on Our Greatest Source of Unhappiness by Maria Popova Hope, memory, and how our chronic compulsion to flee from our own lives robs us of living. “How we spend our days is, of course, how we spend our lives,” Annie Dillard memorably wrote in reflecting on why presence matters more than productivity. “On how one orients himself to the moment depends the failure or fruitfulness of it,” Henry Miller asserted in his beautiful meditation on the art of living. And yet we spend our lives fleeing from the present moment, constantly occupying ourselves with overplanning the future or recoiling with anxiety over its impermanence, thus invariably robbing ourselves of the vibrancy of aliveness. Kierkegaard, who was only thirty at the time, begins with an observation all the timelier today, amidst our culture of busy-as-a-badge-of-honor: Of all ridiculous things the most ridiculous seems to me, to be busy — to be a man who is brisk about his food and his work. The unhappy one is absent. Consider first the hoping individual. Donating = Loving

Richard Wiseman - Research This project scientifically explores why some people live such charmed lives, and develops techniques that enable others to enhance their own good fortune. The research has involved working with hundreds of exceptionally lucky and unlucky people, and the findings have been published in The Luck Factor. For an overview of this work, download this article from Skeptical Inquirer magazine. The Four Principles Prof Wiseman has identified the four basic principles that lucky people use to create good fortune in their lives. Principle One: Maximise Chance Opportunities Lucky people are skilled at creating, noticing and acting upon chance opportunities. Principle Two: Listening to Lucky Hunches Lucky people make effective decisions by listening to their intuition and gut feelings. Principle Three: Expect Good Fortune Lucky people are certain that the future is going to be full of good fortune. Luck School Links BBC Online article on Prof Wiseman's luck research Forbes.com carries Prof.

Bayer and US Government Knowingly Gave HIV to Thousands of Children By Matt Agorist REALfarmacy.com What if a company that you thought you could trust, knowingly sold you a medicine for your child that they knew had the potential to give your child HIV? How would you react? What if a government agency that claims the responsibility for protecting you from such treachery, not only looked the other way, but was complicit in this exchange? Everyone has heard of Bayer aspirin, it is a household name. In 1984 Bayer became aware that several batches of this Factor 8 contained HIV. Unable to sell their Factor 8 in the US, Bayer, with the FDA’s permission, (yes that’s right, the FDA allowed Bayer to potentially kill thousands) sold this HIV infected medicine to Argentina, Indonesia, Japan, Malaysia, and Singapore after February 1984, according to the documents obtained by the NY Times. The result of this sale of HIV tainted medication ended up infecting tens of thousands and killing thousands. Original Source of the article Image Credits

Paula Davis-Laack: Dix choses que les gens heureux font différemment des autres There's More to Life Than Being Happy - Emily Esfahani Smith "It is the very pursuit of happiness that thwarts happiness." In September 1942, Viktor Frankl, a prominent Jewish psychiatrist and neurologist in Vienna, was arrested and transported to a Nazi concentration camp with his wife and parents. Three years later, when his camp was liberated, most of his family, including his pregnant wife, had perished -- but he, prisoner number 119104, had lived. In his bestselling 1946 book, Man's Search for Meaning, which he wrote in nine days about his experiences in the camps, Frankl concluded that the difference between those who had lived and those who had died came down to one thing: Meaning, an insight he came to early in life. When he was a high school student, one of his science teachers declared to the class, "Life is nothing more than a combustion process, a process of oxidation." Frankl jumped out of his chair and responded, "Sir, if this is so, then what can be the meaning of life?" Viktor Frankl [Herwig Prammer/Reuters] Peter Andrews/Reuters

Chief Seattle's Speech The son of the white chief says his father sends us greetings of friendship and good will. This is kind, for we know he has little need of our friendship in return, because his people are many. They are like the grass that covers the vast prairies, while my people are few, and resemble the scattering trees of a storm-swept plain. Our great father in Washington sends us word that he will protect us. But can this ever be? Your god seems to us to be partial. Your religion was written on tables of stone by the iron finger of an angry god, lest you might forget it. Your dead cease to love you and the homes of their nativity as soon as they pass the portals of the tomb. We will ponder your proposition, and when we have decided we will tell you. Back to the Table of Contents of Creation Stories from around the World.

The 14 Habits of Highly Miserable People Photo Credit: Shutterstock.com/aastock November 18, 2013 | Like this article? Join our email list: Stay up to date with the latest headlines via email. Most of us claim we want to be happy—to have meaningful lives, enjoy ourselves, experience fulfillment, and share love and friendship with other people and maybe other species, like dogs, cats, birds, and whatnot. So if you aspire to make yourself miserable, what are the best, most proven techniques for doing it? Here, I cover most areas of life, such as family, work, friends, and romantic partners. • When you’re miserable, people feel sorry for you. • When you’re miserable, since you have no hopes and expect nothing good to happen, you can’t be disappointed or disillusioned. • Being miserable can give the impression that you’re a wise and worldly person, especially if you’re miserable not just about your life, but about society in general. Honing Your Misery Skills 1.