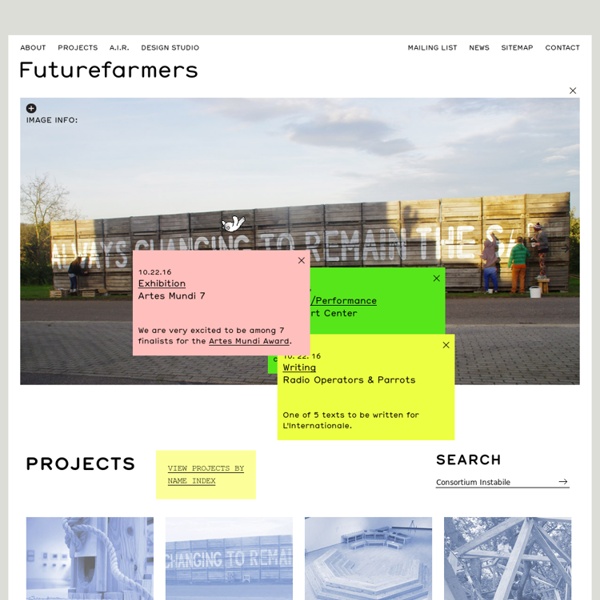 Futurefarmers is a group of diverse practitioners aligned through an interest in making work that is relevant to the time and place surrounding us. Founded in 1995, the design studio serves as a platform to support art projects, an artist in residence program and our research interests. We are artists, researchers, designers, architects, scientists and farmers with a common interest in creating frameworks for exchange that catalyze moments of "not knowing". While we collaborate with scientists and are interested in scientific inquiry, we want to ask questions more openly. Through participatory projects, we create spaces and experiences where the logic of a situation disappears - encounters occur that broaden, rather than narrow perspectives, i.e. reductionist science. We use various media to create work that has the potential to destabilize logics of "certainty".

Grayson Perry Grayson Perry, CBE (born 24 March 1960) is an English artist, known mainly for his ceramic vases and cross-dressing. Perry's vases have classical forms and are decorated in bright colours, depicting subjects at odds with their attractive appearance. There is a strong autobiographical element in his work, in which images of Perry as "Claire", his female alter-ego, often appear. He was awarded the Turner Prize in 2003. Early life[edit]

inCOMMON Community Development Neighborhoods - as the context of where life is lived - provide an extraordinary opportunity to alleviate poverty at a “cause” or “root” level. If a neighborhood is strong and thriving, it's more likely neighborhood residents will enjoy these same traits in both their personal and community life. many neighborhoods face great challenges... As a result of living in such environments, residents and families are denied many basic opportunities for life wellbeing and success. The work of strengthening vulnerable neighborhoods, then, provides our community the strategic window needed to stop poverty before it even starts.

Gaston Bachelard Gaston Bachelard (French: [baʃlaʁ]; June 27, 1884 – October 16, 1962) was a French philosopher.[2] He made contributions in the fields of poetics and the philosophy of science. To the latter he introduced the concepts of epistemological obstacle and epistemological break (obstacle épistémologique et rupture épistémologique). He rose to some of the most prestigious positions in the Académie française and influenced many subsequent French philosophers, among them Michel Foucault, Louis Althusser, Dominique Lecourt and Jacques Derrida.

Gerard Manley Hopkins Life[edit] Early life and family[edit] A poet, Hopkins' father published works including A Philosopher's Stone and Other Poems (1843), Pietas Metrica (1849), and Spicelegium Poeticum, A Gathering of Verses by Manley Hopkins (1892). He reviewed poetry for The Times and wrote one novel. Catherine (Smith) Hopkins was the daughter of a London physician, particularly fond of music and of reading, especially German philosophy, literature and the novels of Dickens. Both parents were deeply religious High Church Anglicans. The Laundromat Project Claro de los Reyes and Rasu Jilani in Creative Conversation December 22, 2015 2015 Create Change Commissioned artists Claro de los Reyes (My Baryo, My Borough: Oral History Project) and Rasu Jilani (Griots in ‘The Stuy’) break bread to reflect on their commissioned projects, and share their motivations and influences as artists, and muse on larger themes that inform their work.