Pawned. Gamification and Its Discontents 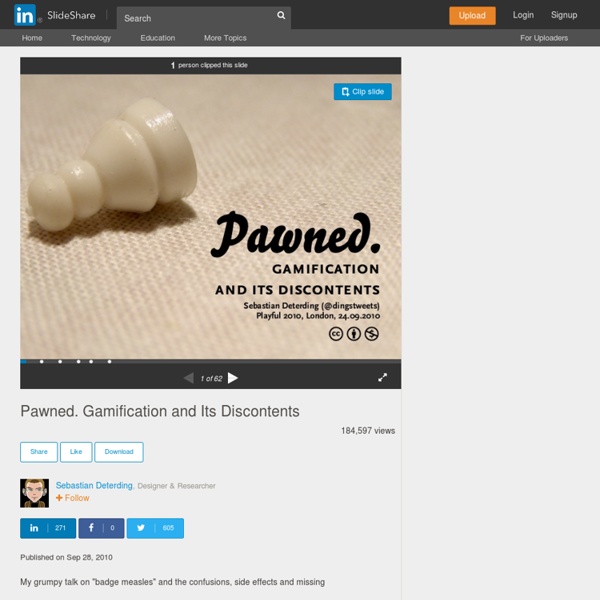 Sixty-two Reasons Why &quot;Gamification&quot; Is Played Out "Game mechanics" are the new digital hotness these days. Fueled by business books like Total Engagement, successful apps like Foursquare, and presentations-gone-viral like Jesse Schell's "gamepocalypse" talk, it seems like every damn thing on the Internet is getting some gamelike interaction grafted onto it like a cyborg appendage. And Sebastian Deterding, a designer and researcher at Hamburg University, has had enough. He distilled his thoughts on "gamification and its discontents" into an embeddable 62-slide presentation that's pithy and pretty in equal measure. Deterling attacks the gamification trend from a variety of angles, but his argument boils down to this: points, badges, and leaderboards do not a true game make. What they do make is distraction, confusion, and obsession with "fake achievement."

Boots Advantage Card signs up third parties online Boots has extended its Advantage card loyalty program by allowing customers to collect points at other retailers including ASOS and Thomas Cook. The health and beauty retailer is launching the Boots Treat Street initiative to allow cardholders to collect reward points with other online retailers and redeem them at Boots. It’s targeting women who prioritise spending on friends and family, encouraging them to collect extra points online and use them to treat themselves. Boots has also released research revealing that 67% of women have difficulty finding the time or money to treat themselves. ASOS, Ebay, Thomas Cook and Toys ’R’ Us are among the online retailers to join the Boots Advantage programme. Cardholders can collect Advantage points by shopping with more than 50 brands through the Treat Street web portal.

Level 10: Nonlinear Storytelling « Game Design Concepts Last time, we learned some basic linear storytelling principles, as told to us by people that worked with books, plays, and movies. And this is fine and good for games that have a linear story. Many video games work this way, where the story is essentially told as a movie broken up into small parts, and the player has to complete each section of the game to see the next bit of movie. I do not mean this in any kind of derogative way; many popular games work like this, and many players find these games quite compelling. Even personally, I have had times when I would be messing about in the subscreens optimizing my adventuring party, only to have my wife call from across the room: “stop doing that and go fight the next boss so you can advance the plot, already!” However, not all games are like this.

How to Use Game Mechanics to Reward Your Customers There's a green card. Then there's silver, gold, and platinum. And then there's the Centurion—the black American Express card. What You Can Learn From H&M’s Use Of Social Media H&M is one of the businesses that has done some great work in using social media for marketing. Here is what you can learn from the company to achieve a more engaging and growing community. Amuse your customers When entering H&M’s Facebook page, you’ll see a number of choices under a tab called “Your H&M”. Among other things, you can go to the “Style Guide” or “H&M TV”. It’s fashion entertainment and you have the remote in your hand to choose whatever you want to. Paper Towel Problem Solved I had a problem. In my classroom bathroom (my room used to be a preschool classroom), I would find tons of paper towel trash all over the floor whenever students washed their hands after a messy project. I tried just remind them to get their paper towel in the trash can and telling them we shouldn't make our awesome custodians' jobs harder and none of it worked. I printed a really simple sign (shown above) that says: Paper Towel in the Trash Can 100 POINTS!!!

Crunching ASOS financial results: yes, fans do boosts sales Online clothing retailer ASOS, super popular with the twenty-something Facebook generation, is the Zappos of Europe, building a massively loyal online community around its latest fashions. This social-savvy formula appears to be making even the company bean-counters happy, as the dot-com reported this week a fat profit and double-digit sales growth in an otherwise tough retail market. Always curious about the connection of community-building and its impact on sales, we take a look here at the relationship between its social media investment and its impact on the top line. In case you missed it earlier this week, it’s official: ASOS is making bank. It’s now the UK’s leading online retailer, beating out Topshop.com nationally, and it just reported a 35% rise in revenues and added 320,000 customers in the last fiscal year. With much of the British retail sector hurting, how is ASOS managing such growth?

Gamification Categorization[edit] Gamification in a narrow sense is used in a non-game context, is built into the service system, and is aiming at an infinite experience. It does not aim at creating a game but offering a gameful experience. NFB/Interactive - National Film Board of Canada At the NFB we like change. For 70 years we've experimented, innovated, and produced a legacy of technical and creative firsts in cinema, animation, and documentary. Think McLaren, Lipsett, Brittain, and Jutra; Stereoscopic 3d, VTR, and participatory media. Today, the way we create, consume, and connect with each other changes by the minute. And this evolving collection of stories reflects that reality. It's the result of artists and storytellers of all sorts utilizing new technology, to explore new forms of creation, for a new kind of Canada.

Get It - Google TV Google TV software comes built right into some TVs, but if you don’t want to buy a new TV you can simply buy a set-top box that plugs right into any HDTV and gives you exactly the same functionality. There are no recurring fees and it even updates itself automatically. Buy online mischer'traxler the idea of a tree 'The idea of a tree' is an autonomous production process which combines natural input with a mechanical process. It is driven by solar energy and translates the intensity of the sun through a mechanical apparatus into one object a day. The outcome reflects the various sunshine conditions that occur during this day. Like a tree the object becomes a three dimensional recording of its process and time of creation. The machine 'Recorder One' starts producing when the sun rises and stops when the sun settles down. After sunset, the finished object can be 'harvested'.

How the iPad is Transforming Web Design This series is supported by Rackspace, the better way to do hosting. Learn more about Rackspace's hosting solutions here. The iPad has only been on the market for six months, but already it has had an impact on the way content is created and consumed. Already we're seeing more and more people at airports, coffee shops and on the train using their iPads to read books, browse the web and watch video. We're also seeing web designers transform their websites and web apps to look more like iPad apps. In the last few months, several high-profile websites have adjusted their designs to look and feel more like the iPad.

“Distraction,” Simplicity, and Running Toward Shitstorms It can scarcely be denied that the supreme goal of all theory is to make the irreducible basic elements as simple and as few as possible without having to surrender the adequate representation of a single datum of experience.—Albert Einstein, “On the Method of Theoretical Physics” (1934) Context: Last week, I pinched off one of my typically woolly emails in response to an acquaintance whom I admire. He’s a swell guy who makes things I love, and he'd written, in part, to express concern that my recent Swift impersonation had been directed explicitly at something he'd made. Which, of course, it hadn’t—but which, as I'll try to discuss here, strikes me as irrelevant.

Agile Marketing Image courtesy As part of my ongoing obsession with all things agile, I've written up a summary of some key practices around Agile Marketing, building on the principles outlined in The Agile Manifesto. This is also cross posted over on The Marketing Society blog: The last IBM Global CEO Study (‘The Enterprise Of The Future’) interviewed 1,130 CEO’s in 45 countries and 32 industries, and found that organisations not only felt bombarded by change, but that many are struggling to keep up. Eight out of 10 CEOs saw significant change ahead, and yet the gap between the expected level of change and the ability to manage it had almost tripled since the previous study in 2006.