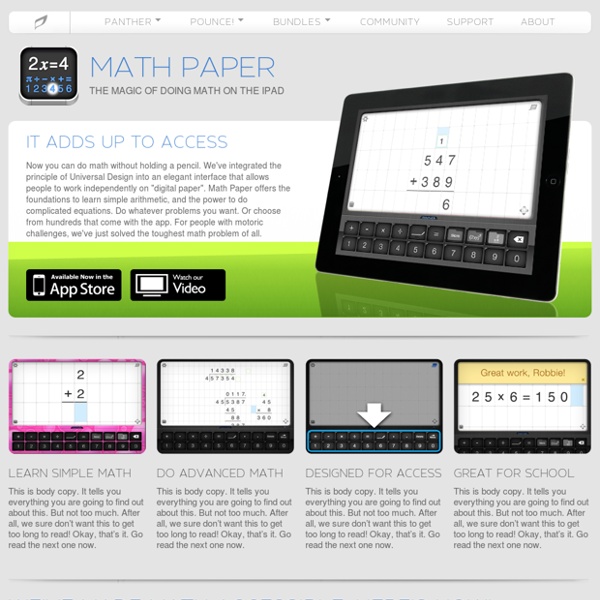 Math Paper lets you do math as easy as 1+1 = 2. But it also has amazingly intuitive tools to let you do carry functions (for any operation), create fractions, and do long division. If you have motoric challenges, Math Paper even lets you move your cursor from the bottom of the iPad. In other words, the challenge to do math is < it was before!

Printable Math Graph Paper Printable Math Graph Paper Here is a graphic preview for all of the graph paper available on the site. You can select different variables to customize the type of graph paper that will be produced. We have Standard Graph Paper that can be selected for either 1/10 inch, 1/4 inch, 3/8 inch, 1/2 inch or 1 centimeter scales. The Coordinate Plane Graph Paper may be selected for either single or four quadrants paper. Write Your Name in Binary Code Those ones and zeros might not look like anything to you, but in binary code the numbers are actually saying “Hello!” Any code that uses just two symbols to represent information is considered binary code. Different versions of binary code have been around for centuries, and have been used in a variety of contexts.

Printable Paper Designed for Math Problems Papers Designed for Math Sometimes we just need special paper for math work. At donnayoung.org, you can print paper that has the multiplication table printed all around the edges and paper that has a number line. I have graph paper and paper that can be used to make a coordinate grid notebook. Multiplication Games ~ Learn Times Tables While You Move This post may contain affiliate links. We love to play math games around here and these multiplication games have been used over and over again in our house. I first shared the idea of Multiplication High Fives here, then decided to take it to the next level and create a downloadable multiplication chart and High Five template. This method has been so effective in getting math facts to stick for my kids. I hope you’ll find it useful as well. High Five Math Games use Whole Body Learning to engage the brain in understanding and retaining concepts paired with movement.

5 Math Apps for Math Averse Students Math is a core subject and one used in everyday life, especially throughout the K-12 years. Students who enjoy and generally perform well in math classes will have their choice of an amalgam of apps to aid them in both study and enjoyment. There are, however, a fair number of students who simply don’t like to do math at school and who certainly won’t easily be tempted to do extra math at home. Luckily, there are a series of apps available to help math averse students. Some of these are geared towards students who need visual stimulation such as colors, patterns, and graphics to remain engaged in general math concepts.

math for primates Tom Henderson Interview My partner in Mathematical crime, Tom Henderson, was interview recently over at Technoccult.net. Here’s a quote: Mathematics is like unicorn anatomy. You imagine this thing, and it doesn’t exist, yet it still comes with facts. I know how many legs a unicorn has. 60 Ways Math Teachers Can Use Google Classroom I have been asked by math teachers how they can use Google Classroom. Google Classroom is great for any subject area, especially math! Earlier I had posted on 5 ways Students Can Use Google Docs in Math. This builds on those ideas with a list of 60 ways Google Classroom can be used by Math teachers. Probably the best blogs by maths teachers around the world Image by DavidErickson via Flickr There are some really great blogs out there written by maths teachers who really care about their practice. I enjoy reading their posts as they share their insight and ideas and think about how it could improve my own teaching. There is wheat and there is chaff out there.