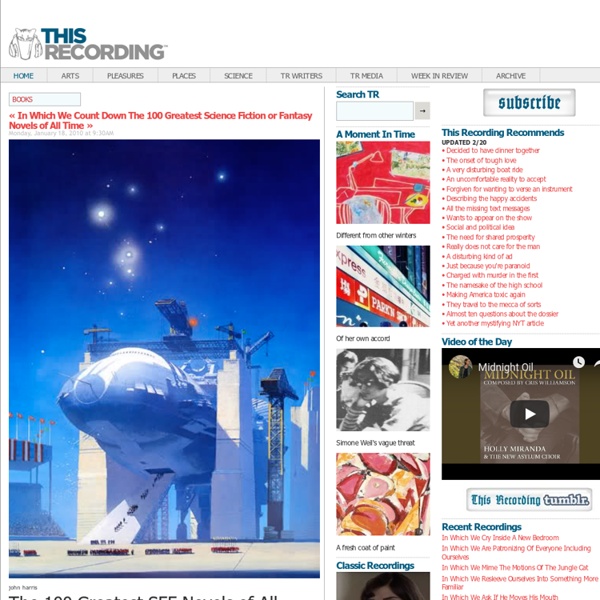 john harris The 100 Greatest SFF Novels of All Time by ALEX CARNEVALE What to read? It is a question asked mostly by women, who comprise the majority of America's reading public. At the nexus of the two genres is where the human imagination begins to reveal frightful and hopeful things about our own society. 100. An extraordinary powerful novel inspired by Vietnam in LeGuin's Hainish series, where one planet gives the gift of interstellar travel to the universe. 99. An original fantasy with the crucial grasp of how to make magic entertaining and plausible, not silly and random. 98. Kress is in true command in her short fiction, but this was her memorable attempt to capture how our society might change and still endure. 97. One of his more well-thought out plots with interesting commentary on religion and sacrifice. 96. Incredibly entertaining and knowing about all sort of aspects of life, some of which I'd never even thought of before. 95. An out-of-nowhere smash with rich detail. 94. 93. 9.

The Top 10 Best Science Fiction Books Before the comments fill up with “Why didn’t you include this” and various slights against our personal and professional integrity, this is just a list of ten great science fiction novels, not in order, and by no means the top ten ever produced. ‘Ten of the best’, not ‘the ten best’. That being said, please post up your own favourites, as we’re always looking for new things to read. 10. Heinlein’s elegantly constructed novel evokes some of the finest traditions in science fiction, with a near-future setting on the mongrel colony of Luna, which is preparing its revolution against the tyrannical rule of Earth. 9. | Kindle Edition Card’s seminal novel has been in and out of the news since its release, whether it’s for the long-mooted (and finally killed) idea of a film adaptation, through to the graphic novel version, through to it being a set text at US military academies. 8. 7. | Kindle Edition 6. | Kindle Edition 5. | Kindle Edition 4. | Kindle Edition 3. | Kindle Edition 2. 1. More Top 10s:

20 Best Science Fiction Books Of The Decade Now, my question is, and not to criticize this list or the authors on it, what makes these books "Books of the Decade"? I would daresay I have a vested interest in the literary world, yet some of these books are foreign to me (Glasshouse, Quicksilver, The Mount). But perhaps I don't get around enough. Others I've heard of, but have yet to read (Oryx and Crake, Rainbows End). Some I understand. Let me know. @anomaly_kid: Yeah, these books are gamechangers. Also there were a TON of books that didn't make the list that I love dearly and have been critically acclaimed. In the end, I wanted a list that showed the best of a wide range of scifi/fantasy/horror - so some of the books are well-known and others aren't. @Annalee Newitz: Fair enough. Though it probably sounds a bit cliche these days, I'm working on my own book and could use all the mind-stretching ideas possible. My list of books to read grows every time I visit this site.

The 15 Best Speculative Fiction Books of 2010 The only book I've read here is the Hunger Games trilogy. I'm surprised not to see more discussion about it. It certainly seemed to tear up the site as it was being released (I was behind the curve—it was very frustrating catching up, but so worth it). There were problems with the worldbuilding, but the emotion of the situation hit home for me, and hit hard. I spent a lot of time weeping (FUCK OFF, I'M HARD CORE) during the second book. Now I have to decide which books from this list look good. Do I get into the zombies? The Broken Kingdom series sounds right up my alley. Solar also sounds great. The Lifecycle of Software Objects seems like a surefire winner of sad and science. And I can't not check out How To Live Safely In A Science Fictional Universe. Damn you, IO9.

15 Books You Should Have Read in 2010 - Culture - GOOD Image by Jane Mount, Courtesy 20x200 Yes, we read Freedom this year and yes, it was good. As Esquire put it, it “was one great slab of a book, at a time when most books have given up on greatness.” But there were other books in 2010, books that had to compete for our ever more challenged attention spans and won. So we asked a few members of the GOOD team & some of our good colleagues which book made their best list this past year. (And since discovering something you might have missed is one of the great pleasures of reading, no selections were disqualified for having been published prior to 2010). 1. Author: Stephen King Recommended by: Ben Jervey, Environment Editor Why read? 2. Author: George R.R. Recommended by: Morgan Clendaniel, Deputy Editor, GOOD Why read? 3. Author: Jan Gehl Recommended by: Alissa Walker, Contributing Editor, GOOD Why read? 4. Author: Tom Rachman Recommended by: Zach Frechette, Editor in Chief, GOOD Why read? 5. Author: Walter Van Tillburg Clark Why Read? 6. Why read?