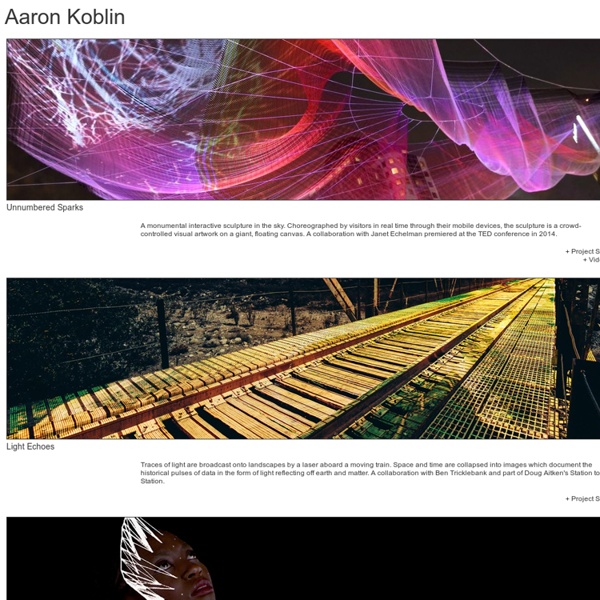 The University of Chicago Magazine: Features Jason Salavon churns raw data through computer programs to make distinctive art. By Brooke E. O’Neill, AM’04 Photography by Dan Dry Albuquerque: Machine Wilderness Thank you to everyone who made ISEA2012 an amazing success! "'Machine Wilderness'...conveyed a consciousness of consequence, a sense that new technologies can yield earth-changing results, that artistic vision can drive such technologies to such results, and that usefulness, and especially useful transformation, is a form of beauty." - Peter Frank, Huffington Post In September, 2012, the worlds of art, science and technology came together in Albuquerque, New Mexico for a six day, international conference, which kicked off a season-long exhibition and series of public programs around the region. ISEA2012 Albuquerque: Machine Wilderness was the 18th International Symposium on Electronic Art.

H 2112: DEC 6-9:CHICAGO ++ GLI.TC/H is an event that celebrates the glitch! Artists, thinkers, performers, makers && breakers gather to intentionally Fâ–²C▄▀SH.*UPâ†“ ⟁ Alerts! ⟁ Is Hip-Hop Making You Stupid? The Hip Hop Word Count Breaks It Down What can rap lyrics teach us about our culture? Tahir Hemphill, a lifelong hip-hop enthusiast, has spent the past four years compiling an “ethnographic database” of hip-hop lyrics to answer that question. Comprising more than 40,000 songs spanning from 1979 to present day, Hemphill’s exhaustive archive makes up the project Hip-Hop Word Count, a searchable rap resource that analyzes lyrics and assigns various metadata to them, such as time, geographic location, word count, syllable count, and readability. By indexing every metaphor, simile, cultural reference, meme and socio-political idea, the Hip-Hop Word Count charts a geography of language and aims to chronicle the migration of ideas throughout rap’s history. It’s a resource that can help answer probing socio-economic questions like, “How does the rise in slang terms for money used in hip-hop lyrics correlate to U.S. poverty levels?” Tell us about the Hip-Hop Word Count.

Livecodelab What's this? This is a toy live coding environment: programs run immediately as they are typed. Pick something from the "Demos" menu or try the tutorials. Want more info? connections On Twitter last night, I came across something fascinating, via Maria at Brainpickings. (Always a source of fascinating bits.) It was an amazing visualization of the interactions of characters in the Iliad, and how they change throughout the book, by Argentinian designer Santiago Ortiz. s+v+m Collecting Virtual, Augmented and Mixed realities, places built on a tridimensional matrix where the data is materialized in space. More Immersive Spaces under the tag “Immersive Audiovisual Environments”. “Unthinkable complexity. Lines of light ranged in the non-space of the mind, clusters and constellations of data. Like city lights, receding.” William Gibson “Neuromancer”, 1981

WILDERNESS MACHINE The Wilderness Machine 2010 The Wilderness Machine is the physical extension of the online piece The Wilderness Downtown. The machine generates postcards from the handwritten notes created by viewers of the interactive film. Each postcard is a person writing to their younger selves. The machine uses a suction arm to transfer a blank postcard to a metal podium where a mechanical pen is programmed to reproduce the original pen strokes. Generative Art Links Some links to Generative Art, Math & Fractals, and other creative ways of creating computional imagery. The list is not meant to be exhaustive: rather, it is a list of my favorite links. Generative Art Software General-Purpose Software

What I’m Working On: Interactive Video for Citizen Journalism Last month, I participated in an all-day workshop that Mozilla organized as part of Web Made Movies to introduce filmmakers to the possibilities of interactive video using Popcorn.js. I lobbied to be paired with Yasmin Elayat to create a prototype for her project, 18 Days in Egypt, an interactive documentary covering the recent revolution in Egypt, using citizen-produced video. It’s a credit to Yasmin’s knowledge of the material and the work of the Popcorn.js team that we were able to build and demo the whole thing in a single day. View the prototype here.