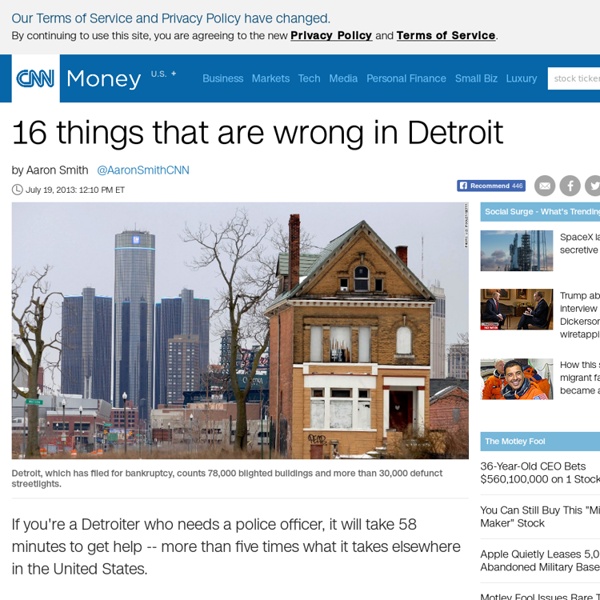 And if you're walking around the city, it might make sense to bring a flashlight -- about 40% of the 88,000 street lights don't work. Those are two of the problems highlighted by Michigan Gov. Rick Snyder as he approved a bankruptcy filing for the state's biggest city. The problems have fed on themselves, resulting in 78.000 buildings either abandoned or ruined. "Does anybody think it's OK to have 40-year-old trees growing through the roofs of dilapidated houses?" asked emergency manager Kevyn Orr, in a news conference on Friday. Orr said the city had filed for bankruptcy because it would take more than 50 years to pay off the city's $11.5 billion in unsecured debt while not conducting even the most basic maintenance, such as filling potholes and plowing snow. Related: Detroit bankruptcy filing came with only 5 minutes to spare Here are some of the other problems outlined in the bankruptcy filing: -- 70 Superfund hazardous waste sites -- Fire stations are "old and not adequately maintained"

Detroit Lights Up Darkened Streets, as Crime Rate Drops Detroit, beginning in the 1970s, became the most violent and crime-ridden city in the United States. For decades, the Motor City had the dubious distinction of the highest crime rates in the nation, including murders. Many of the crimes were committed in darkness. Detroit’s street lights fell into disrepair, vandals broke the bulbs, thieves stole the copper wiring and funds to make the repairs dried up. Three years ago, an estimated 40 percent of the total street lights in Michigan’s largest city were out, especially in the tougher neighborhoods on the outskirts. But last month, the city heralded a milestone: a massive 65,000-light LED replacement project is now complete.

How bad are conditions in Detroit public schools? This appalling. Detroit public school teachers are staging "sick-outs." Here is what you need to know about the school conditions that they say make it difficult to do their jobs. (Claritza Jimenez/The Washington Post) Detroit residents wait less for police, ambulances; see how long MLive File Photo DETROIT, MI -- Detroit emergency response times by police, ambulance and firefighters over the years has been slow, compared to national averages at least, but they're improving, City Hall says. As of last week, it took about 12 minutes for an ambulance and 18 minutes for police officer to respond to life-threatening calls in Detroit, according to data recorded on the Detroit Dashboard, a publicly accessible website that tracks various quality-of-life statistics each week.

How Detroit ended up with the worst public transit Jim Storm has an easier time than most. In the region that gave America a set of wheels, the Ferndale resident hasn’t owned a car in years, leaving behind the perpetual repairs, insurance payments and gas pumps for the bus — and for him, at least, it works. The thought of someone actually ditching his car in metro Detroit, however, is virtually unheard of. Living within a stone’s throw of Woodward Avenue, though, it makes sense for Storm. During the week, the 43-year-old leaves his home in the morning, walks toward the Suburban Mobility Authority for Regional Transportation stop near the southwest corner of Marshall and Woodward avenues, waits for one of the numerous Woodward SMART buses — one typically arrives every 15 minutes — and rides to the Detroit Institute of Arts, where he’s worked for years as the museum’s mount designer and fabricator. Storm knows his situation is unusual.

The Detroit Bankruptcy The Detroit Bankruptcy The City of Detroit’s bankruptcy was driven by a severe decline in revenues (and, importantly, not an increase in obligations to fund pensions). Depopulation and long-term unemployment caused Detroit’s property and income tax revenues to plummet. The state of Michigan exacerbated the problems by slashing revenue it shared with the city. The city’s overall expenses have declined over the last five years, although its financial expenses have increased. In addition, Wall Street sold risky financial instruments to the city, which now threaten the resolution of this crisis.

Detroit bus drivers speak out on bankruptcy, crisis in city bus system “What you have now is not a true government, it is a dictatorship” By our reporters 21 December 2013 For four years, Detroit residents have seen the already grossly inadequate public bus system gutted by cuts in public funding. Bus service in the city is now in daily acute crisis. Many workers have lost their jobs or faced disciplinary measures because buses on major routes are chronically late or so full they cannot pick up passengers. At least one third of Detroit residents do not have cars and must rely on buses to go to work or school, shop for groceries and get to medical appointments.

Auto workers, bus riders denounce Detroit bankruptcy ruling “The Democrats conspired with the Republicans on this” By Zac Corrigan 17 November 2014 Over the weekend, Detroit workers continued to voice their opposition to the Detroit bankruptcy plan approved by Judge Stephen Rhodes on November 7.

Detroit Rising: Life after bankruptcy One year after a federal judge approves Detroit's bankruptcy exit plan, progress has been made while looming challenges remain, especially city pensions The City of Detroit has more than enough cash to pay its daily bills. Thousands of busted streetlights have been replaced. City retirees still receive pension checks, and valuable paintings remain ensconced in the gilded halls of the Detroit Institute of Arts.

How Detroit went broke: The answers may surprise you — and don't blame Coleman Young Originally published Sept. 15, 2013 Detroit is broke, but it didn’t have to be. An in-depth Free Press analysis of the city’s financial history back to the 1950s shows that its elected officials and others charged with managing its finances repeatedly failed — or refused — to make the tough economic and political decisions that might have saved the city from financial ruin. Instead, amid a huge exodus of residents, plummeting tax revenues and skyrocketing home abandonment, Detroit’s leaders engaged in a billion-dollar borrowing binge, created new taxes and failed to cut expenses when they needed to. Simultaneously, they gifted workers and retirees with generous bonuses. And under pressure from unions and, sometimes, arbitrators, they failed to cut health care benefits — saddling the city with staggering costs that today threaten the safety and quality of life of people who live here.