A Recipe for Turmeric Juice: A Powerful Healing Beverage 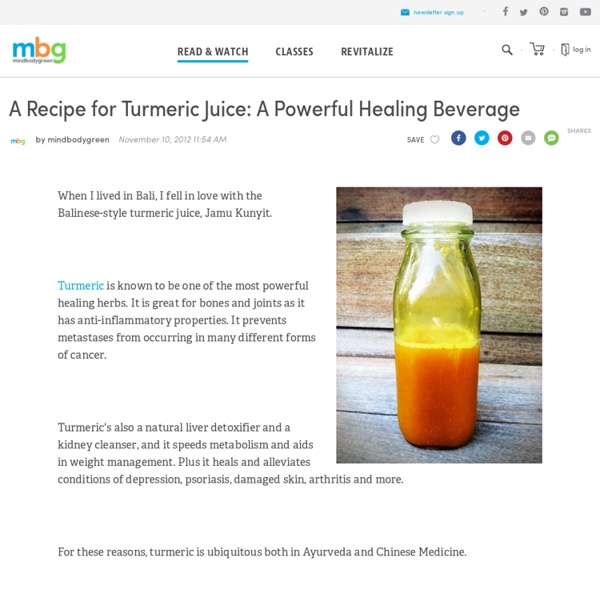 When I lived in Bali, I fell in love with the Balinese-style turmeric juice, Jamu Kunyit. Turmeric is known to be one of the most powerful healing herbs. It is great for bones and joints as it has anti-inflammatory properties. It prevents metastases from occurring in many different forms of cancer. Turmeric's also a natural liver detoxifier and a kidney cleanser, and it speeds metabolism and aids in weight management. Plus it heals and alleviates conditions of depression, psoriasis, damaged skin, arthritis and more. For these reasons, turmeric is ubiquitous both in Ayurveda and Chinese Medicine. Here's what you'll need to get started: 5-7 inches turmeric 5-7 tamarind 2 lemons raw honey water blender strainer bowl mason jar(s) or other glass jar with lid 1. 2. 3. 4. By this time, you should be able to see the little seeds coming out. 5. 6. 7. 8. 9. Enjoy! Photo Credit: Shutterstock

Higher Health: Honey Lemon Cough Syrup with Coconut Oil Honey has powerful anti-viral and anti-microbial properties! In clinical studies, honey has shown to be just as affective in alleviating coughs as over the counter cough medicine. Honey is also known to help alleviate allergies. Lemon juice is often used in home remedies for a good reason! Coconut oil is rich in antioxidants and contains lauric acid, which is anti-bacterial and anti-viral. Mix these three ingredients together and you have yourself a super immune boosting syrup that will help alleviate coughs and sore throats! Ingredients 3 tablespoons fresh squeezed lemon juice1/4 cup local raw honey2 tablespoons coconut oil Mix all the ingredients together in a small saucepan and heat over low until coconut oil is melted. Take warm syrup by the spoonful as desired. Once the syrup is cooled the coconut oil will harden. Sources

Stoner Things - The Ultimate Review Website for Marijuana Related Products. Home Page DIY Homemade Mosquito Repellent Yikes it’s mosquito season and that means finding a bug spray that works or staying indoors all summer long! We opt for making our own homemade mosquito repellent because it is a chemical free version that way we know it’s safe and effective. Why do we make our own homemade mosquito repellent? Recent studies link chemicals in bug sprays to Parkinson’s Disease. Here are some great Homemade Mosquito Repellent Recipes to Use: Recipe #1 Ingredients: 5 drops of Lavender Essential Oil 5 drops of Citronella essential oil 3 – 4 Tbsp Vanilla Extract 4-5 Tbsp. Mix all of the above ingredients in a spray bottle and fill the rest up with water (or a mix of water and vodka, or a mix of water and witch hazel). Recipe #2 – 1/2 ounce citronella oil – 1/4 ounce lavender oil – 1/16 ounce clove oil – 1/8 ounce tea tree oil – 1/8 ounce jojoba oil Do not use this concentrate on your skin without diluting. Mosquito experts encourage a multi-pronged approach starting with the basics: 1. 2. 3. 4. 5. 6.

The Most Potent Antioxidant On the Planet Astaxanthin – The algae that heals, protects, and prevents DNA damage. Astaxanthin is a natural carotenoid extracted from a marine algae found in… you guessed it — Hawaii! Well, at least the kind that I buy is made from algae harvested here in our islands. The blue-green pigment in certain types of marine micro-algae is the richest natural source of the astaxanthin carotenoid. And astaxanthin, is the most potent lipid-soluable source for antioxidants known to man! This superfood supplement has plenty of powers, including: Protection against cosmic ionizing radiation while flying: The next-best thing to flying at night, and thereby avoiding radiation at 1,000 times the level that the airport body scanners will give you, is supplementing regularly with astaxanthin, according to health expert and Weston A Price Foundation supporter, Dr. Prevention of sunburn and skin cancer: Astaxanthin is nature’s internal sunscreen. Energy boost: Anti-aging: Prevention of cataracts and other eye diseases: Whew!

What is the best source for organic, NON-GMO seeds? Share Monsanto now owns a staggering 90% of the conventional seed market in the US, including organics and heirlooms! They have been agressively purchasing seed companies over the past several years including organic and heirloom companies. It’s not easy to avoid them, which is why we’ve done some legwork and research for you to help you find the best place to purchase your NON-GMO seeds. If you’re trying to grow wholesome organic food, which has no ties to GMOs or corporations such as Monsanto, then you’re in luck. Here’s the best choice for organic, heirloom, NON-GMO, Monsanto-Free seeds. 1. Seedsnow.com are full supporters of the Safe Seed Pledge. Not a single one of the seeds offered on their website are from Monsanto, Seminis, or any other company affiliated with Genetically Engineered seeds. Growing organic from the source: So long as you start with NON-GMO seeds and refrain from using chemicals/pesticides/etc during the growing process then the produce you grow will be “organic”.

Six signs you are gluten intolerant - and don't even know it More than 55 diseases have been linked to gluten, the protein found in wheat, rye, and barley. It’s estimated that 99% of the people who have either gluten intolerance or celiac disease are never diagnosed. It is also estimated that as much as 15% of the US population is gluten intolerant. Could you be one of them? Six common symptoms of gluten intolerance (1) Gastrointestinal (GI), stomach, and digestive problems. (2) Headaches and/or migraines. (3) Diagnosis of an autoimmune disease such as Hashimoto’s thyroiditis, rheumatoid arthritis, ulcerative colitis, lupus, psoriasis, scleroderma or multiple sclerosis. (4) Emotional issues involving chronic irritability and sudden, irrational, mood shifts. (5) Neurological issues. (6) Fatigue, brain fog, or feeling tired after eating a meal that contains gluten. Most of these symptoms are common to other health issues and diseases. Am I Gluten Intolerant? How to treat gluten intolerance? Eliminating gluten 100% from your diet means 100%.

Purple potatoes pack serious antioxidants compared to their white-fleshed counterparts Share by Dana Norek – NaturalNews.com You may or may not have noticed a new potato in town at your local grocer or more likely at your local health food store. It is native to South America and is called the purple potato, named for its deep purple skin as well as the purple flesh within it. There are several types of the purple potato including the Purple Majesty, Purple Viking and Purple Peruvian varieties. Purple potatoes are rich in antioxidant phytochemicals The rule of thumb with fruits and vegetables is that the deeper and richer the color, the more nutritious the content tends to be. This compound is from the powerful flavonoid family of antioxidants and is found in other nutritional powerhouse foods such as blueberries and pomegranates. Further, this deeply pigmented antioxidant has shown great promise in protecting the integrity and structure of DNA and encouraging the production of cytokines which are vital to proper immune response.

Obesity epidemic caused by EMF exposures in the home according to startling new research (NaturalNews) Two-thirds of the U.S. population is overweight, and about one-quarter to one-third of adults are obese. Fact. Poor diet and a lack of exercise are at fault, the experts say. But what if the cause of this epidemic was something even more insidious? What if that which is considered the lifeblood of our modern day lives, electricity or more precisely dirty electricity, was really to blame? The answer to these questions is an unequivocal yes. According to Dr. Dr. Dirty electricity, defined as electrical pollution contaminating the electrical grid, stems from the use of many commonplace items found in or around the home but also from the poor design of our electrical distribution system. Studies show the human body suffers adverse affects at a cellular level from this constant exposure to dirty electricity. In his book Dirty Electricity: Electrification and the Diseases of Civilization, Dr. • ADHD• Suicide• Cancer• Obesity• Asthma• Diabetes• Cardiovascular disease

Regulat (350ml) Regulat®, developed by a food chemist and pharmacist in Germany, Dr. Hans Niedermaier, is a Certified Organic whole food fermented liquid supplement created through a process known as live cascade fermentation. This special preparation contains numerous Certified Organic fruits, vegetables, nuts and herbs and involves multiple fermentations using several strains of beneficial Lactic Acid bacteria. Fermentation is a powerful form of food preparation that breaks down the food into its smallest components assuring optimal bioavailability and digestibility of those key nutrients. Adding a variety of fermented foods into one’s daily diet is crucial for maintaining optimal gut health, immune health, enzyme regulation, acid/alkaline balance as well as for supporting detoxification and inflammatory processes of the body. Most fermented foods involve one type of food that is fermented with one type of bacteria. For healthy gums, swish Regulat® in the mouth for 60 seconds. More Specific Protocols

Are You Suffering From Adrenal Fatigue? – The term adrenal-fatigue describes a vague, wiped out chronically fatigued syndrome, possibly with aches and pains and sleep disorders. This syndrome has become more common in our burn-out culture. But what causes adrenal fatigue, and more importantly, what are the solutions? The two small adrenal glands are located one above each kidney. They are directly involved with producing a variety of hormones such as adrenaline, cortisol, aldosterone, and testosterone or estrogen. The adrenal glands are also indirectly involved with producing or distributing up to 50 hormones in our bodies. This sympathetic nervous system reaction can be chronic and low level from “normal” daily living stress that most try to deny or self medicate with alcohol, causing too much burden on the adrenals. Mainstream medicine considers most adrenal fatigue assessments undiagnosable and non-existent. Read the rest of the article The Best of Paul Fassa

How To Feel 18 Years Old Again (Men Only) Natural Compounds Boost Muscle Growth 6% in 10 Days — But Should They Be Banned? Learn how thousands of men are finding the "Fountain of Youth" with a 2 step boost that is 100% risk free and becoming immensely popular: (Online Health Trends) - For the past couple of months our readers have been going crazy over two free internet products that are helping men across the world lose the fat & get shredded abs in less than 1 month. This amazing, but odd '2' Step Trick has been featured on many popular TV shows that you most likely have seen. Celebrities, pro athletes and Hollywood actors have all lost a significant amount of body fat with just these 2 diet products while at the same time adding insane amounts of muscle. You may have heard of the enormously popular Testabolan in the news. Receive Your Free Samples Today >> See The Special Links Below! In the story on his blog he states: "I couldn't believe how easy it was. Testabolan Cyp™ Has Been Proven To: The Plan? 1. 2. Week One: Week 2:

Garlic Soup Made With 52 Cloves of Garlic Can Defeat Colds, Flu and Even Norovirus Forget the flu shot. A soup based on more than 50 cloves of garlic, onions, thyme and lemon will destroy almost any virus that enters its path including colds, flu and even norovirus. As we sneeze and cough our way through these dark months of contagious nasties, garlic is being hailed for its powers to halt viruses in their tracks. It has gained its reputation as a virus buster thanks to one of its chemical constituents, allicin. A recent and significant finding from Washington State University shows that garlic is 100 times more effective than two popular antibiotics at fighting disease causing bacteria commonly responsible for food borne illness. When the garlic is crushed, alliin becomes allicin. ‘This chemical has been known for a long time for its anti-bacterial and anti-fungal powers,’ says Helen Bond, a Derbyshire-based consultant dietitian and spokeswoman for the British Dietetic Association. ‘Because of this, people assume it is going to boost their immune systems. Serves 4 Source:

How to harvest an aloe leaf from an aloe plant.