10 Words That You've Probably Been Misusing 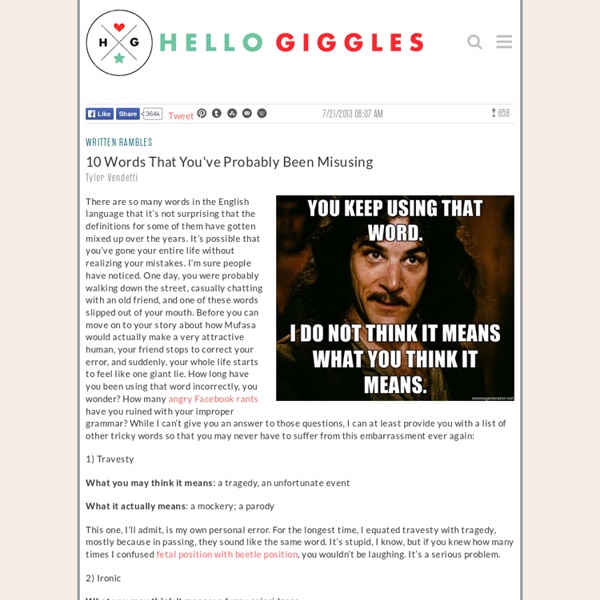 Home Remedies for Sinus Infection – Natural Sinus Infection Treatment Apple Cider Vinegar – Apple cider vinegar is a hailed sinus infection treatment. Being just one of many apple cider vinegar uses, countless individuals attest to the effectiveness of apple cider vinegar against a multitude of health conditions, including sinus infection. One of the most powerful ways to use ACV is to mix 8oz of warm water with 2 tbsp of ACV and 1 tbsp of honey. In addition to the above home remedies for sinus infection treatment, you could try utilizing some of these options. Elevate your head while sleeping.Apply warm compresses to your face multiple times daily for 5 minutes each.Vitamin C is an excellent immune booster, and can help to fend off sinus infections. Source: Natural Society Apple Cider VinegarMedicinal Herbs Related Posts « Take Action: Repeal the Monsanto Protection Act Portland Voters REJECT Water Fluoridation »

25 Ways To Fuck With Your Characters « terribleminds: chuck wendig - Waterfox As storyteller, you are god. And to be frank, you’re not a particularly nice god — at least, not if you want your story to resonate with readers. A good storyteller is a crass and callous deity who treats the characters under his watchful eye like a series of troubled butt-puppets. From this essential conflict — storyteller versus character — a story is born. Put differently, as a storyteller it’s your job to be a dick. It’s your job to fuck endlessly with the characters twisting beneath your thumb. And here’s 25 ways for you to do just that. 1. Gods have avatars, mortal or semi-mortal beings that exist on earth to embody the deity’s agenda. 2. The audience and the character must know the stakes on the table — “If you don’t win this poker game, your grandmother will lose her beloved pet orangutan, Orange Julius.” 3. Impossible odds are a powerful way to fuck with a character. 4. Drop the character smack dab between two diametrically opposed choices. 5. 6. This one? 7. 8. 9. 10. 11. 12.

Mothering the Mother: 40 Days of Rest | Birth Without Fear “The role of the midwife is to be mother to the mother.” (Unknown) We’ve all heard that ‘all that matters is a healthy baby’. Mothers matter. Of course infant health is important. In the past, women were surrounded by their own mothers and other older women during and after birth. But that kind of caring is the kind of attitude we need to cultivate. While many people believe that, “Women from [fill-in-the-blank random 'savage' culture] just have the baby in the fields then get right back to work,” in reality most traditional cultures, including those throughout South America, Europe (Greece), the Middle East and Asia, a 40-day rest period is considered mandatory after an infant’s birth. Women from the mother’s community stop by her place to offer support, childcare for older children, and to bring food. *Photography used with permission. **Svea Boyda-Vikander is a mother, psychotherapist and visual artist.

Seven Tips From Ernest Hemingway on How to Write Fiction | Open Culture - Waterfox Image by Lloyd Arnold via Wikimedia Commons Before he was a big game hunter, before he was a deep-sea fisherman, Ernest Hemingway was a craftsman who would rise very early in the morning and write. His best stories are masterpieces of the modern era, and his prose style is one of the most influential of the 20th century. Hemingway never wrote a treatise on the art of writing fiction. 1: To get started, write one true sentence. Hemingway had a simple trick for overcoming writer's block. Sometimes when I was starting a new story and I could not get it going, I would sit in front of the fire and squeeze the peel of the little oranges into the edge of the flame and watch the sputter of blue that they made. 2: Always stop for the day while you still know what will happen next. There is a difference between stopping and foundering. The best way is always to stop when you are going good and when you know what will happen next. 3: Never think about the story when you're not working. 7: Be Brief.

Behind a Little House Project: Dramatic Changes in Landscape Behind a Tiny House For his Behind a Little House Project Italian photographer Manuel Cosentino found an unsuspecting muse: a tiny nondescript house on an unexceptional hill. He returned to photograph the small building from the exact same location for nearly two years in order to capture the dramatic changes in weather and light that utterly changed the scenery just beyond the horizon. As part of a traveling exhibition the photos are mounted on a wall behind a book containing copies of a photo of the house against a white sky. Viewers are then invited to draw their own interpretation of what appears behind the little house. The first photograph starts the series with a Big-Bang-like explosion and sets everything into motion, the last is a new beginning – it represents that piece of “carte blanche” that we are all given with our lives. The entire project is currently on view at Klompching Gallery in New York as part of their Annual Summer Show through August 10th.

10 Mythological Creatures and Shapeshifters - Listverse - Waterfox Creepy Shapeshifting is a common theme in mythology and folklore. Many legendary creatures have this ability, which is represented in a full body transformation. It enables the creature to trick, deceive, hunt, and kill humans. Throughout history many murder sprees have been attributed to the presence of these beings. The Leshy is a male woodland spirit in Slavic mythology believed to protect wild animals and the forests. Selkies are creatures found in Faroese, Icelandic, Irish, and Scottish mythology. Berserkers were a group of Norse warriors. In Japanese folklore the Kitsune is an intelligent and magical being. The púca is a legendary creature of Celtic folklore, most notably in Ireland, the West of Scotland, and Wales. The Wendigo is a creature appearing in the mythology of the Algonquian people. An encantado is a Brazilian legendary creature. An aswang is a mythical creature in Filipino folklore. Vampires are legendary creatures said to feed on the blood of humans and animals.

Internet Service Providers Plan Censorship Strategies For All Customers By 2014 (PreventDisease) When censorship fails there is always a fallback strategy to muzzle the population – going straight to the source. In this case internet service providers (ISPs) are the companies that offer users around the world access to the Internet. There are many websites which pursue censorship strategies to prevent specific information from getting through to the public domain. Google, facebook, youtube are among many of the largest sites in the world which employ sophisticated information suppression techniques. The problem is, it hasn’t worked very well, so ISPs now plan to block specific websites and search terms they consider offensive under the guise of initiatives to block pornography and other sexually offensive material. But it won’t stop there. Just two years ago, a University of British Columbia Professor made headlines when he stated that censorship has become a worldwide norm and that new laws will control what you read or see on the internet. Why Is This Happening?

Cliche Finder - Waterfox Have you been searching for just the right cliché to use? Are you searching for a cliché using the word "cat" or "day" but haven't been able to come up with one? Just enter any words in the form below, and this search engine will return any clichés which use that phrase... Over 3,300 clichés indexed! What exactly is a cliche? This is Morgan, creator of the Cliche Finder. Or, you might like my crazy passion project: Spanish for Nerds: Learning Spanish via Etymologies! Back to cliches... if you would like to see some other Web sites about clichés? © S. Special thanks to Damien LeriAnd to Mike Senter Morgan's Web page Berries Over Bugs! Tell Dannon to Get Insect-Extract Out of Yogurt Instead of relying entirely on strawberries, raspberries, cherries, or other healthy wholesome fruit, Dannon sometimes uses an extract made from the pulverized, dead bodies of cochineal insects to give its yogurts fruity red colors. It’s deceptive and gross. But for some, cochineal insects (usually labeled as carmine on food labels) can trigger a dangerous allergic reaction. Dannon should go skip the insect-extract and use more fruit to color its yogurt. To: Franck Riboud, CEO, Groupe Danone It has come to my attention that in 13 of your fruit-flavored yogurts, you use carmine to give those products additional red color. Quelle horreur! As you know, carmine is the coloring extracted from the pulverized dried bodies of the cochineal insect. If you think that your yogurts are insufficiently pink or red, please consider using additional fruit, and not carmine or synthetic dyes, to color them. Sincerely, [Your name here]