20 Things The Rich Do Every Day 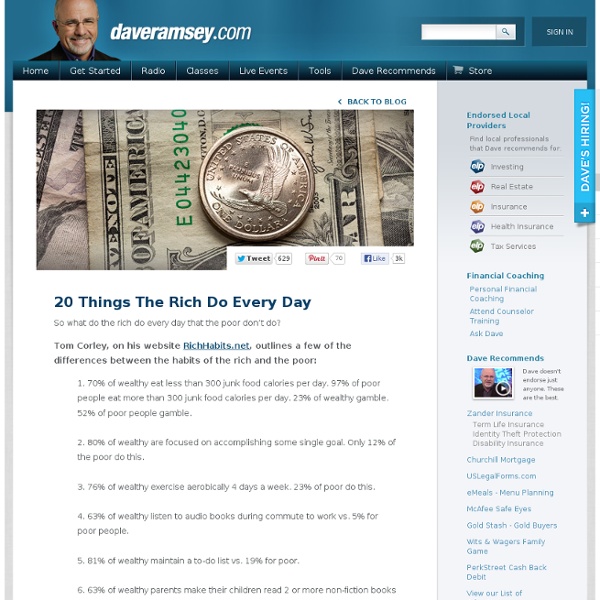 Health---Well-Being If you wanted to be god over all the earth, you'd need to find a way to control it. Just as the enemy has infiltrated the church, government, and all the rest of earth's systems, he has infiltrated the health of mankind. Many of the physical symptoms (lethargy, despair, foggy mindedness) that the people of God experience are due to a breakdown and corruption of our culture's food and water supplies. It is a fact and fairly understood that the majority of the foods ingested are no longer "food" in the true sense. The bottom line is we are a toxic people - even those of us who do eat properly. Most of us douse ourselves with immunizations, cosmetics, lotions and antiperspirants, use fluoride toothpaste, take one type of metal ladened medication or another, and drink or shower in toxic water. I am convinced that most sicknesses and diseases, including things like fibromyalgia, chronic fatigue, ADHD, autism, depression and so much more, are rooted in toxicity. RAW Tupelo Honey! Lamps

White Chili How to Make Chili The ingredients are key to great chili. We’ll show you the one must-have ingredient (no skimping!) for authentic, delicious homemade chili. bhg.com How to Make Homemade Chili A favorite on a cold winter's day, this homemade chili recipe will warm you right up. recipe.com Chicken Chili with Black Beans and Corn By substituting chicken for beef and loading up on beans and fresh vegetables, this chili recipe is healthier than most! Vegetarian Chili -- You Won't Miss the Meat! Balanced flavors from vegetables and spices make up for the missing meat in this vegetarian chili recipe. Learn how to make chili—a really good chili—and you've got a recipe that will give you dinners, tailgaiting parties, and potluck dishes all year round. Smokin’ Scovilles Turkey Chili See how to make spicy turkey chili. allrecipes.com The kick of herbs and spices gives this chili amazing flavor, with less fat. Insanely Easy Vegetarian Chili See how to make a simple chili with beans and loads of veggies.

the-anglican-and-catholic-churches-have-finallyrealised-they-must-change-to-survive-but-is-it-too-late-9016199 Just a word, first, about where one should direct one’s gaze. It is natural to bracket the Pope and the Archbishop together, but so great are the structural differences between the two Churches that this can mislead. In the Roman Catholic Church, everything flows down from the top, whereas in the Church of England authority is widely dispersed. The Pope first looks with an unforgiving eye at the barriers to missionary ministry that the Church itself erects. He calls this “A tomb psychology”, which slowly transforms Christians into “mummies in a museum”. Instead the Pope dreams of a “missionary option”, that is, a missionary impulse capable of transforming everything, so that the Church’s customs, ways of doing things, times and schedules, language and structures can be suitably channeled for the evangelization of today’s world. But with regard to missionary endeavour, there is a key difference between the Church of Rome and the Church of England. a.whittam-smith@independent.co.uk

13 Pictures For All The Introverts Out There May 24, 2012 | No Comments » | Topics: Pics Loading ... Hot Stories From Around The Web Other Awesome Stories Experts give advice on year end donations to charity December 29, 2013|By Kate Santich, Staff Writer Hoping to lock in a final tax write-off for 2013, more Americans are expected to make charitable contributions Monday and Tuesday than at any previous point in the year. But whether you're a big fish in the donor pond or a little guppy, wise-giving experts warn that some homework and a dose of caution will help get you the most bang for your hard-earned charitable buck. "Part of the problem is that a lot of giving is emotional," said Mark Brewer, president and CEO of the Community Foundation of Central Florida, a public grant-making organization. "And emotional appeals tend to disconnect our brains from our wallets. You want to be smart about giving." One way to educate yourself is by checking the free public "knowledge base" the foundation has created at cfcf.guidestar.org. "A big CEO salary is a real turnoff," said Orlando attorney John Morgan, known for being a generous but careful supporter of philanthropy.

Our Blogs | Active Happiness This post is an excerpt from my best-selling book A Short Course in Happiness: Practical Steps to a Happier Life. Courage does not always roar. Sometimes it is the quiet voice at the end of the day saying, “I’ll try again tomorrow.” — Mary Anne Radmacher The things we say, whether out loud or to ourselves, have a profound effect not only on how we feel, but also on what we do. When we tell ourselves “I can’t do it” or “They’ll never allow it,” we undermine our own power and motivation to make change in our lives. So it’s important that we pay attention to what we say. Ask yourself this: How often are my comments positive and empowering, and how often are they negative and self-defeating? Here’s one way to start the shift. Harnessing the Power of “Yet” Adding “yet” to the end of a sentence can turn it from an old complaint into a new challenge. Here are some examples of the power of “yet.” (more…)

The 7 Great Lies in the Church Today False teachings running rampant within the American church have created a “whiteout” condition for millions of believers. Here’s how to detect—and overcome—these destructive doctrines before it’s too late. Editor’s Note: Most Charisma readers remember Steve Hill as the fiery evangelist from the Brownsville Revival who has since continued to win countless souls for Jesus around the world. But what many readers don’t realize is that Hill only recently came out of a three-year battle with melanoma. Years ago my wife, Jeri, and I were driving on the interstate when we were overcome by a white cloud of windblown snow. By the providence of God I came to a stop in the median, where we waited out the storm. A whiteout is a weather condition in which visibility is severely reduced by snow. This is what’s happening today in the church. The Lord recently imparted to me a vision concerning the state of the church and what we must do about it. How Has This Happened? 1) Overemphasis of Prosperity