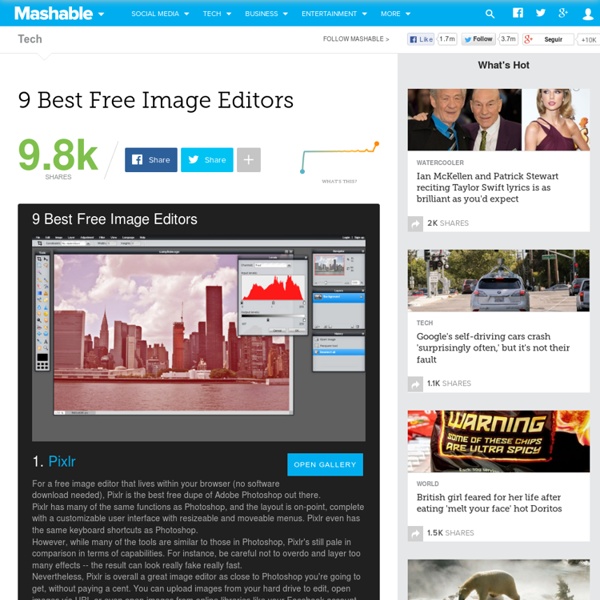 Adobe Photoshop may be dominant among industry professionals, but the software can be daunting for beginners and amateurs who just want to touch up the occasional photo. There are many simpler, easier-to-use alternatives to Photoshop, some of which offer features the latter does not. Plus, many image editors don't have the hefty sticker price of Adobe products. We rounded up nine free image editors that range from basic programs with plenty of filters to near professional-grade software for pixel-to-pixel editing. Check out the gallery and let us know if we missed any of your favorites in the comments below. Image: Flickr, Marty.fm.

Simulations back up theory that Universe is a hologram Artist's impression by Markus Gann/Shutterstock At a black hole, Albert Einstein's theory of gravity apparently clashes with quantum physics, but that conflict could be solved if the Universe were a holographic projection. A team of physicists has provided some of the clearest evidence yet that our Universe could be just one big projection. In 1997, theoretical physicist Juan Maldacena proposed1 that an audacious model of the Universe in which gravity arises from infinitesimally thin, vibrating strings could be reinterpreted in terms of well-established physics. The mathematically intricate world of strings, which exist in nine dimensions of space plus one of time, would be merely a hologram: the real action would play out in a simpler, flatter cosmos where there is no gravity. “It seems to be a correct computation,” says Maldacena, who is now at the Institute for Advanced Study in Princeton, New Jersey and who did not contribute to the team's work.

NG Photography: 50 Stunning Contest Winning Photographs Source of all photographs: 1 More Pages: Page 1 Page 2 Page 3 Page 4 The Best Articles For Chilling Out With WTF Girls: Photographed at Just the Right Moment Girls are usually calm and sensible creatures. But there comes a time in every girls life when things get out of control. Quantum black hole study opens bridge to another universe Physicists have long thought that the singularities associated with gravity (like the inside of a black hole) should vanish in a quantum theory of gravity. It now appears that this may indeed be the case. Researchers in Uruguay and Louisiana have just published a description of a quantum black hole using loop quantum gravity in which the predictions of physics-ending singularities vanish, and are replaced by bridges to another universe. View all

About Us What is MIT App Inventor? MIT App Inventor is an innovative beginner's introduction to programming and app creation that transforms the complex language of text-based coding into visual, drag-and-drop building blocks. The simple graphical interface grants even an inexperienced novice the ability to create a basic, fully functional app within an hour or less. How to Remove Background Noise From Your Screencast Audio (Tip: For best results you should listen using headphones, earbuds or just turn the volume up on your speakers.) What Can You Do About that Pesky Background Noise? The topic of enhancing the audio in your web video or screencast project came up in a discussion with friends during the last couple of weeks. Of course, your best bet against degraded audio in the final production is to front load your project with decent hardware (e.g., microphone, mixer, etc.), while sanitizing your acoustic environment as much as possible from background noises. But, then again, saying all that is sort of like telling someone that they can save a lot on the cost of multi-vitamins by simply “eating right.”

Weird Photo Manipulation Art by ~Toxicclowd This post features a collection of bizarre photo manipulations done by some creative deviantart artists. 22 photos Weird Quantum Tunneling Enables 'Impossible' Space Chemistry A weird quirk of quantum mechanics is allowing a chemical reaction thought to be impossible to occur in cold gas in outer space. In the harsh environment of space, where the temperature is about minus 350 degrees Fahrenheit (minus 210 degrees Celsius), scientists had thought a certain reaction involving alcohol molecules couldn't take place, because at such low temperatures, there shouldn't be enough energy to rearrange chemical bonds. But surprisingly, research has shown that the reaction occurs at a rate 50 times greater in space than at room temperature.