5 Powerful Ways to Open a Presentation 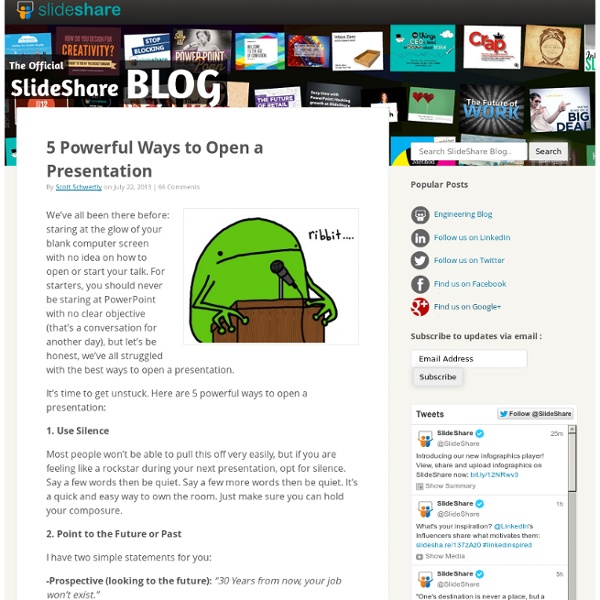 We’ve all been there before: staring at the glow of your blank computer screen with no idea on how to open or start your talk. For starters, you should never be staring at PowerPoint with no clear objective (that’s a conversation for another day), but let’s be honest, we’ve all struggled with the best ways to open a presentation. It’s time to get unstuck. Here are 5 powerful ways to open a presentation: 1. Use Silence Most people won’t be able to pull this off very easily, but if you are feeling like a rockstar during your next presentation, opt for silence. 2. I have two simple statements for you: -Prospective (looking to the future): “30 Years from now, your job won’t exist.” -Retrospective (looking to the past): “In 1970, Japan owned 9% of the market. The reality is that looking into the future or past always sparks engagement since that’s where our hearts live. 3. The easiest way to open a talk is simply to quote someone. 4. I don’t know about you, but I love Snapple. 5. Related Posts

Are Your Students Distracted by Screens? Here's A Powerful Antidote I was fortunate to teach in a 1:1 laptop classroom for seven years. In my classes, students took daily notes on computers, did research, wrote essays, created various multimedia publications, and worked on collaborative projects. Yet I knew that if I wasn’t watching their screens, my students would at some point be doing something they were not supposed to be doing. So, while I was thrilled with the tremendous educational content available to my students, I was concerned with the less-than-desirable elements pervasive on the Internet.

Event Registration A complimentary webinar event sponsored by Echo360. Originally aired on: Thursday, 8 May at 11 AM EDT / 4 PM BST Dr. Russell Mumper hit a roadblock in his core Pharmaceutics class. Having taught the class for nearly a decade, including the last four at the University of North Carolina at Chapel Hill, he noticed that students were increasingly more distracted and the majority of his interaction with students was about core, foundational content. In addition, every year the class scored an average 80 percent on the cumulative final exam. The Science of Scientific Learning: Flipping Pedagogy – it's not just about what goes on in the classroom. The flipped classroom is one of the most talked about reforms in education. It is often described as a relatively simple idea – students are presented with the material to be learned before the lesson takes place (normally in the form of a video or pre-lecture readings), then during the lecture/lesson itself, they engage in problem solving or group work, or some other type of active learning. The flipped institute say on their 'how to page' :

Elearning@ed 2014 LiveBlog » Nicola Osborne Welcome – Jeff Hayward Jeff is noting how this is the twelfth annual elearning@ed event, and that’s a really notable length of time for an internal event like this. There’s a real buzz about technology enhanced learning, eLearning, or whatever you want to call it. There seems to be a stepping up a gear and a real sense of fun and creativity here. Lots of rethinking of pedagogies, and of teaching and learning and the use of technology in this. Free resources for blended and flipped learning close formatos disponibles Ir al contenido principal All the community A student’s lecture to professors Can students teach their lecturers a thing or two? Austin Fitzhenry thinks so Source: Andy Bunday I’m sorry to break it to you, but your students are not going to remember 90 per cent, possibly 99 per cent, of what you teach them unless it’s conceptual The US government is paying me to go to college. That should be something to get excited about.

Making Learning Social Imagine being an undergraduate student surrounded by the intensive scientific research activity of a world-class research university and experiencing the close engagement and intimate atmosphere of a small liberal arts college. A $1.5 million award from the Howard Hughes Medical Institute (HHMI) to UC Santa Barbara will make that experience possible for biology students. Sixty percent of all undergraduates who enter college intending to major in science, technology, engineering and mathematics (STEM) areas of study do not complete bachelor’s degrees in any of those disciplines. The new BioMentors program at UC Santa Barbara, funded by the HHMI, is designed to address the challenge of increasing the success and retention of STEM majors by building learning communities that engage students and instructors in a highly interactive environment. Discussion groups will meet in a redesigned classroom that facilitates active learning and makes optimal use of digital technology.

IHC Mobile Developing questionnaires for educational research: AMEE Guide No. 87 June 2014, Vol. 36, No. 6 , Pages 463-474 (doi:10.3109/0142159X.2014.889814) The term “survey” is quite broad and could include the questions used in a phone interview, the set of items employed in a focus group and the questions on a self-administered patient survey (Dillman et al. 2009). Although the processes described in this AMEE Guide can be used to improve all of the above, we focus primarily on self-administered surveys, which are often referred to as questionnaires. For most questionnaires, the overarching goals are to develop a set of items that every respondent will interpret the same way, respond to accurately and be willing and motivated to answer. The seven steps depicted in Table 1, and described below, do not address all aspects of survey design nor do they represent the only way to develop a high-quality questionnaire.

17 right (and wrong) ways to use technology - Daily Genius The world of education is one of the many things we focus on here at the Daily Genius. We like to encourage you to learn in new ways – through viral content, interesting videos, and visuals that we think are worth your time. If you’re interested in education OR technology, then this is a great graphic you should check out. It’s via Bill Ferriter who shared this with the world on Twitter quite awhile ago. Why do we think it’s awesome?

How To Overcome The iPad Learning Curve Technology can make life a lot easier in the classroom. In the past criticism was often aimed at new technology coming into the classroom, recent advances in tech have made drastic changes to the learning environment. This has actually been the case for numerous generations. When televisions were introduced to schools and kindergartens, many people were outraged at the invasion of technology into the educational process but of course, television became an integral part of the learning process. It is therefore fair to say that when used properly, tablets such as the iPad can be used effectively in the classroom. Free eBook - How Gamification Reshapes Learning By B. Santhosh Kumar We, human beings, are natural ‘gamers’! In our childhood, we freely exhibit and experience our liking for games. However, when we grow up, while some of us are lucky enough to carry this interest forward, others let go of it due to various reasons. However, the fact is that most of us still have a liking to play games if and when given an opportunity.

The Quickest Guide to Run a Complex Term Search on DBP’s PRPM Dewan Bahasa dan Pustaka’s PRPM is the first and ultimate tool for an English/Bahasa Melayu translator like me. However, in the earliest days, searching for lexical meaning of a word or term was rather daunting. One has to go to advanced search page, or one level down to do complex searches.