A Glossary of Gestures for Critical Discussion 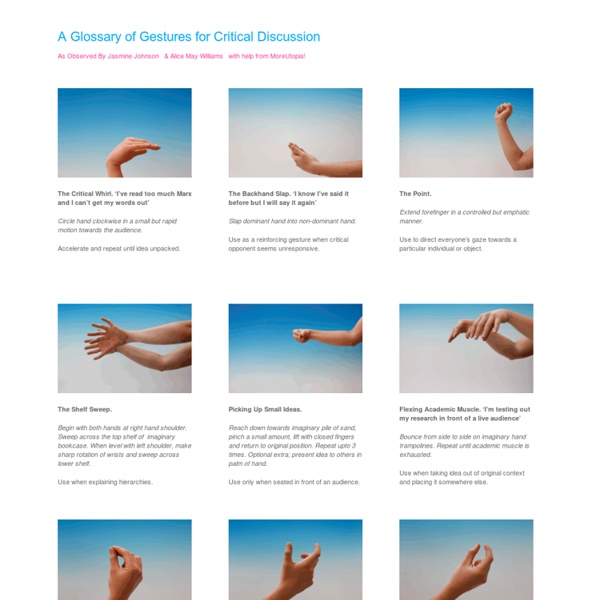 7 Hand Gestures That Make You Look Like a Real Intellectual You’ve definitely seen it at some point. Maybe it was in a lecture in college. Maybe it was in a TED talk you watched recently. Alice May Williams and Jasmine Johnson observed “the full complement” of these gestures in the process of earning their MFA at Goldsmiths College in London. Throughout their courses, Williams and Johnson saw the gestures repeated so frequently that “it became hard not to notice them spreading from academics to students and back again,” they explain–a sort of vicious cycle of performative thinking. Click to Open Overlay Gallery Their virtual manual includes nine gestures in all. On the more advanced end, you have something like “The Shelf Sweep,” a two handed maneuver that involves pushing aside the contents of an imaginary bookcase and then quickly sweeping aside the contents of the shelf below it in an opposite direction. After a measure of viral success, Williams and Johnson brought their materials into the real world. Go Back to Top.

The best advice for public speaking and presentations This article was taken from the October 2015 issue of WIRED magazine. Be the first to read WIRED's articles in print before they're posted online, and get your hands on loads of additional content by subscribing online. Whether it's getting up in front of an audience of 1,000 guests or ten overworked employees, public speaking can be unnerving. Michael Weitz and Abigail Tenembaum, founders of Virtuozo, coach everyone from TED speakers to CEOs to express their message effectively. "It's like a musical instrument, everybody can learn with enough practice," says Tenembaum. Understand your message "One thing that is critical is knowing your key message," says Tenembaum. Connect with your audience Look at them, don't stare, but speak directly to them and check they are staying engaged. Have a conversation Don't think about your words. Keep it clear Words should not get in the way of your message. Don't be afraid to pause If you have a sudden memory lapse, don't panic. Move for a reason

Four Improv Techniques That Can Help You Communicate Better | Co.Create | creativity + culture + commerce Have you heard the one about the man who took off his pants in the middle of a corporate training exercise? "That happened once!" says actor Robyn Scott. She’s describing the freewheeling atmosphere integral to the communications workshops she runs for Second City, the improv theater that famously served as a launchpad for some of the biggest names in entertainment, including Tina Fey, Amy Poehler, and Steve Carell. As an instructor with Second City Works (SCW), the theater’s consulting side, Scott leads groups of up to 50 employees from such companies as Cisco, Facebook, and Google in a series of 10- to 20-minute exercises that draw on one of the key tenets of improv: the willingness to adopt a "Yes, and . . . " approach to conversation. Know Your Audience Scott says Google has hired SCW to bridge generation gaps between employees. Play The Scene You’re In Find The Hero In Any Narrative Let Go Of Your Own Agenda

Unconventional Presentation Tips to Wow Your Audience We’ve all heard the basic public speaking advice: Make eye contact, speak more slowly than you think you need to, tell a story. But what about the tips that go below the surface — tips that the pros have learned from giving countless presentations over the years? Turn to these three decks to take your speeches to the next level: Throw in Your Funny Bone Most of us can agree that humor in a presentation makes it that much more memorable — but a joke can quickly become a flop if not delivered the right way. Luckily for us, there’s a formula to get your audience laughing. Repeat After Me: Repeat, Repeat, Repeat This deck by presentation design firm SketchBubble gives an exhaustive list of tips, from phrases you should repeat before getting on stage to techniques for eliminating stage fright. PowerPoint Is Not the Problem — It’s You Most presentations these days suck, says cyber security engineer Ian Trimble. Check out our new Creator’s Hub for SlideShare tips, best practices and more!

How to Close Your Speech With Power Your speech is going great. You’ve opened with a bang and have hit all your key points. As you look out at the audience, they are on the edge of their seats; they’re nodding, and engrossed with every word that you say. You’re about out of time, and you need to wrap it up. So you say: -“Who has questions for me?” If you ended your presentation with one of these statements before, then you’ve blown your close. I’ll admit that I’ve said all of those phrases at one point in my speaking career. Your conclusion is the most valuable real estate in any speech. How do you do that? 1. The main purpose of your conclusion is to signal that the end is near. You’ve probably heard this quote from Dale Carnegie: “Tell the audience what you’re going to say, say it; then tell them what you’ve said.” While repetition is good thing, a summary that merely repeats your main points is a snooze fest. You want to be creative. It’s creative and my audience remembers my points. 2. 3. It’s their battle cry. Happy.

Educational Technology and Mobile Learning: The Do's and Don'ts of Presenting August , 2017 When it comes to presentations, no matter what industry you’re in, creating that first impression and providing a presentation that will win over your audience comes with its pressures. Standing in front of that audience and involving them in what you’re saying is important in the success of any presentation. If you have great content, your presentation has a great starting point for success and will help to give you confidence as a presenter. The content of your slides will set the scene of your presentation, where the words used really do matter. Some key do’s and don’ts for communicating your message effectively are as follows: The key Do’s of presenting:Practice your presentationIntroduce yourself to the audienceMaintain eye contact with the audienceUse props, handouts and videos for added interestAlways ask if the audience has any questions

10 Keys To Writing A Speech “This is my time.” That attitude will kill a speech every time. You’ve probably sat through some lousy speeches. Despite the speakers’ renown, you eventually tuned them out over their self-indulgent tangents and pointless details. You understood something these speakers apparently didn’t: This was your time. They were just guests. Of course, you’ll probably deliver that speech someday. In writing a speech, you have two objectives: Making a good impression and leaving your audience with two or three takeaways. 1) Be Memorable: Sounds easy in theory. There are other rhetorical devices that leave an impression. Metaphors…Analogies…Surprise…Axioms. 2) Have a Structure: Think back on a terrible speech. Audiences expect two things from a speaker: A path and a destination. 3) Don’t Waste the Opening: Too often, speakers squander the time when their audience is most receptive: The opening. When you write, come out swinging. 4) Strike the Right Tone: Who is my audience? Look at your message.

When Dealing with Difficult People, Try a Complementary Approach To hear President Donald Trump tell it, the United States under President Barack Obama had bungled one negotiation after another on the global stage due to an inability to stand firm and take tough stances on key issues when dealing with difficult people and conversations. “Right now, we have the wrong group of negotiators who have left us being totally out-negotiated,” Trump said in an interview in spring of 2016 with Breitbart News. “We have incompetent people leading our country and it’s evident in the terrible deals we’ve made with China, Mexico, and virtually every country in the world.” Trump called the Iran nuclear negotiations “a horrible deal for the United States and an even worse deal for Israel.” “A Trump presidency will force the Iranians back to the bargaining table to make a much better deal” for the United States, the candidate wrote in a September 2016 USA Today editorial. The results? How do approach dealing with difficult people? Related Posts