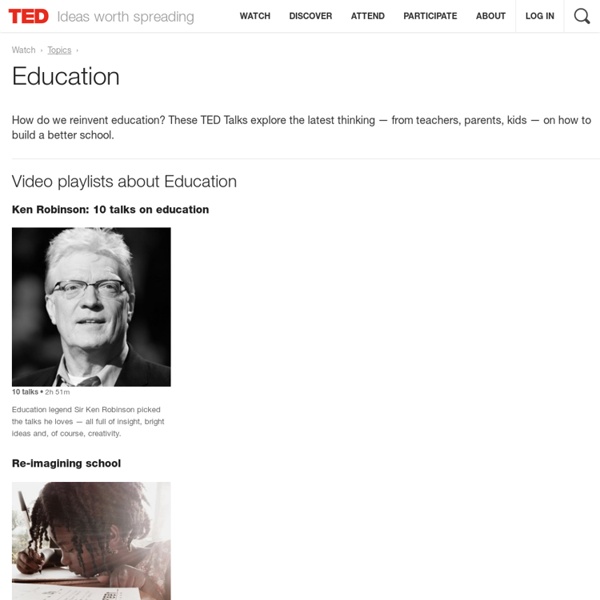 NOVA Can Wind Turbines Make You Sick? Residents living in the shadows of wind turbines say the sound is making them sick. But so far the science isn't there. From NOVA Next | Jun 27, 2018 Thirty Years Ago Today, Global Warming First Made Headline News On June 23, a NASA climate scientist, James Hansen, told a U.S. From NOVA Next | Jun 23, 2018 New Middle Eastern Particle Accelerator’s Motto is “Science for Peace” In a region in turmoil, an unprecedented joint venture of scientists and policymakers is working together on Jordan’s new particle accelerator under the motto "science for peace." From NOVA Next | Jun 21, 2018 Psychological Damage Inflicted By Parent-Child Separation is Deep, Long-Lasting Here's what happens in the brain and the body when a child is forcibly separated from his or her parents.

8 Technologies That Will Shape Future Classrooms What does the future of learning hold? What will classrooms of the future be like? Emerging technologies such as cloud computing, augmented reality (AR) and 3D printing are paving the way for the future of education in ways we may have yet to see. At the very least though, we can extrapolate from what these promising technologies and predict how schools will adopt them in time to come. However, just as the original intentions for new technology often give way to innovative and unpredictable usage, we can never be sure if a twist is waiting for these rising stars. Recommended Reading: Major Tech In Education Trends In 2013 [Infographic] 1. We’re still waiting for Augmented Reality to take the world by storm by way of Google Glass, gaming and awesome apps for astronomy. It’s expected to wow audiences with its AR capabilities, which allow users to see additional information layered over what they see through the lens. Read Also: 5 Top Augmented Reality Apps For Education A New Way To Teach 3.

The Difference between Aliens, Demons and Fallen Angels The Difference Between Fallen Angels, Demons, Aliens, Jedi, and the Watchers By Sherry Shriner In these last days, the Bible says it will be a time of mass hybridization and the mixture and corruption of human DNA by fallen angels, also known as "Aliens." The government is and has been, conditioning the existence of aliens through Hollywood, science fiction, cartoons, and other sources. These Aliens are not ascended masters, or enlightened ones, or beings from galaxies millions of miles away, nor are they our forefathers or original creators. The Lord has told me that in the coming days, these Aliens will make their presence more visibly and physically known on earth. As the end times approach, the lies of extra terrestrial lineage, heritage, and creation will come out in full force. Two Separate Rebellions in the Early Days Most people are familiar with the rebellion of Satan wanting to be like God and wanting to be worshipped as God. In Enoch Chapter 6:1 it says.. 3 and beget us children.'

10 Emerging Education Technologies Are you or your students wearing your Apple Watches to school, and if so, are you using them as part of your curriculum? What about the use of digital textbooks, adaptive learning, collaboration with other schools or flipped classrooms? These technologies represent some of the cutting edge tools and trends in education. Image via Flickr by Kārlis Dambrāns As we look at the top new trends in edtech, we notice some common themes: Individualism– much of the new technology is for one person and is customized to that person’s preferences, to be used when convenient. 1. 2. 3. Shared information—collaboration is key, whether it is with increased reliance on social media and an opportunity for more openness. 4. 5. 6. Hands on—even as education becomes more digitalized, there will be a need for hands-on learning. 7. 3D Printing—This allows students to transfer digital information to reality. Flexibility—the learning process must be adapted to meet the needs of students. 8. 9. 10.

Lindsey Williams 12 Emerging Educational Uses of Technology That are the Most Exciting Right Now Well, it's that time of year again … the start of a new school year. With it often comes the irresistible urge to make another list, or even better … many lists! Lists help us to plan, and they can also help us reflect and assess. One list I really enjoy putting together as we head into a new academic year is an updated look at which educational uses of technology have shown the most promise over the last year. So, looking back and thinking forward, here are a dozen instructional uses of technology that are the most compelling right now. Augmented Reality AR is just so much fun and comes in many different flavors. Adaptive Learning & Competency Based Education I've heard people refer to Adaptive Learning and CBE as one and the same, but to my way of thinking, they are very related but still distinct. CBE is essentially a fundamental change to how students get credentialed, which is largely enabled by Adaptive Learning tools and pathways. The Flipped Classroom Student Response Systems

Simon Peter versus Simon the Sorcerer This is a great expose by the late Dr. E.L. Martin. It documents the true history of the Samaritans, the meaning of the word "peter" in the ancient world and the "church" that was established at Rome by Simon the Sorcerer. "But there was a certain man, called Simon, which beforetime in the same city used sorcery, and bewitched the people of Samaria, giving out that himself was some great one: To whom they all gave heed, from the least to the greatest, saying, This man is the great power of God. Right from the very beginning, Satan had his counterfeit "messiah" operating right in the true Messiah's backyard. Simon believed and was baptized. From Simon Magus we get the word simony which means to buy a religious office with money. After his encounter with St. As in the case of Patrick and Palladius, the arch-fiend Satan took advantage of the similarities of the names to supplant one with the other. "To hell with you and your money . . . for trying to buy the gift of God......." And why not?

The 5 Emerging Educational Technologies You Should Know about January31, 2014 The educational landscape is witnessing a drastic change due to the use and integration of emerging technologies. However, though these changes are revolutionary but they are still far from being transformative because the gap between the technologies our students are using out of school and the ones they have access to inside the walls of school is widening. With the emergence and massive uptake of these new emerging technologies, there appeared a new learning culture one which is catalyst of the culture schools should encourage and cultivate. Today, I want to share with you this handy infographic that features 5 examples of emerging technologies which have been or are expected to be used in the classroom. Cloud ComputingMobile TechnologyGame Based LearningMOOCsLearning Analytics source: