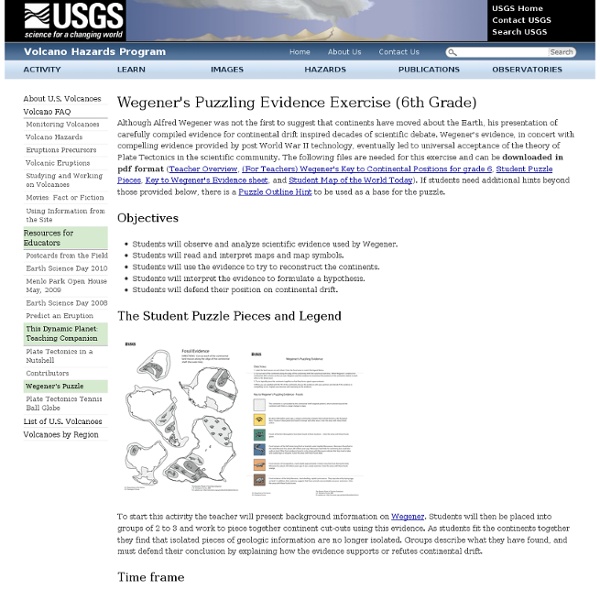 Although Alfred Wegener was not the first to suggest that continents have moved about the Earth, his presentation of carefully compiled evidence for continental drift inspired decades of scientific debate. Wegener's evidence, in concert with compelling evidence provided by post World War II technology, eventually led to universal acceptance of the theory of Plate Tectonics in the scientific community. The following files are needed for this exercise and can be downloaded in pdf format (Teacher Overview, (For Teachers) Wegener's Key to Continental Positions for grade 6, Student Puzzle Pieces, Key to Wegener's Evidence sheet, and Student Map of the World Today). If students need additional hints beyond those provided below, there is a Puzzle Outline Hint to be used as a base for the puzzle. Objectives Students will observe and analyze scientific evidence used by Wegener. The Student Puzzle Pieces and Legend To start this activity the teacher will present background information on Wegener.

This Dynamic Earth View of the planet Earth from the Apollo spacecraft. The Red Sea, which separates Saudi Arabia from the continent of Africa, is clearly visible at the top. (Photograph courtesy of NASA.) Most dangerous job in the world: Incredible footage of men working on top of volcanos This incredible footage shows men working on a super volcanic mountain range in East Java, Indonesia. The workers, many of whom aren't expected to live past 50, breathe highly noxious gases which come out of the Kawah Ijen Volcano without masks, carrying loads of up to 70kg on their backs from a quarry. Many work shirtless and have huge growths on their backs from the heavy loads. Photographer Brad Ambrose captured the pictures along with his pal Geoff Mackley, while trekking through Indonesia.

January 6, 1912: Continental Drift! “Beautiful is what we see, More beautiful is what we understand, Most beautiful is what we do not comprehend.” Anatomist and self-educated geologist Nicolaus Steno, 1673 January 6, 1912 the German meteorologist Alfred Wegener presented in a lecture entitled “Die Heraushebung der Großformen der Erdrinde (Kontinente und Ozeane) auf geophysikalischer Grundlage” (The uprising of large features of earth’s crust (Continents and Oceans) on geophysical basis) for the first time his hypothesis of the ancient supercontinent Pangaea, from which all modern continents split apart. Now_and_Then When you first find a fossil it is sometimes hard to tell what kind of animal it belonged to. It is usually just a part of the original animal. In this section you will find pictures of various fossils that you too may some day discover.

PhET Lab: Plate Tectonics Topics Plate Tectonics Crust Lithosphere Mantle Density Buoyancy Earth Science Description Videos - Geology Geology may be a science that moves very slowly, but a number of videos bring the subject to life for students. Education World compiled some great videos that will get kids excited about the topic. For each one, we include a description and grade level.