Science Experiments You Can Do At Home or School 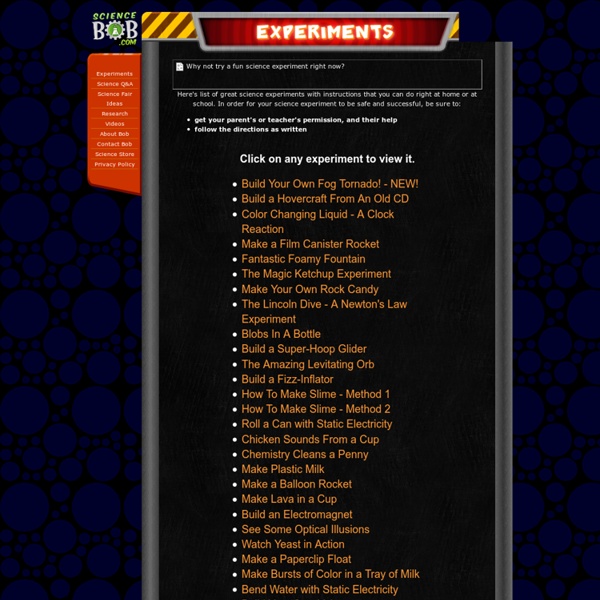 The Best 100 Science Experiments | The MacDiarmid Institute In 2013, The MacDiarmid Institute in conjunction with (what was then) The New Zealand Teachers Council, launched a competition to find the The Best 100 Science Experiments for Kiwi classrooms. Primary School teachers from around the country entered their experiments, with the chance of winning a place in this "Experiment Bank". Here you will find resources for teachers and students for a great range of experiments. The competition will run again this year, with 100 experiments being the end goal. Nature of Science is the overarching, unifying strand of the New Zealand Science Curriculum. Physical World The physical world strand provides explanations for a wide range of physical phenomena, including light, sound, heat, electricity, magnetism, waves, forces, and motion, united by the concept of energy, which is transformed from one form to another without loss. Physical World Experiments: Sandwich Bag Magic Cricket Stump Pulleys Straw Flutes Separation of Substances Rainbow Milk Ice Babies

Amazing Ads That Promote Science Science World has mastered the art of creative billboards that promote science by teaming up with Rethink Canada for their “We Can Explain” and “Now You Know” Campaigns. Science World is located at the TELUS World of Science in Vancouver, British Columbia, and the signs not only promote their cause, but also communicate a scientific fact in a fun and original fashion. Check out some of their clever ads below. Science World British Columbia Science World British Columbia Science World British Columbia Read this next: Philae Lander Runs Out Of Battery And Enters Deep Sleep Five Fun Activities for a Children’s Science Club | Montreal Science for Everyone A few years ago, I attended a conference in Ottawa hosted by the Science and Technology Awareness Network (STAN), an organization that promotes science and technology education in Canada ( One of the things that struck me during that conference was the discussion that science and technology education in Canada is lagging behind other countries and that fewer young Canadians than ever before are opting for post-secondary education in the sciences. As such, one of the primary mandates of the conference was figuring out how to encourage more young Canadians to pursue higher degrees and select careers in the sciences. By the time most students reach high school, they’ve already made up their minds about science and it’s too late. As with many things, a passion and interest in science begins at an early age. Science clubs are a great way to get young children involved in science while also having fun. 1. 2. 3. 4. 5. There you have it! Like this:

Who Came Up With Chewing Gum? | Wonderopolis If you had a choice between chewing on a wad of tree sap, a mouthful of rubber bands or a stick of gum, which would you choose? If the answer seems obvious, you may be surprised. All three have more in common than most people realize. Chewing gum has a history — a long, long, loooong history. Many years before Columbus landed in America, citizens of the world were chewing gum and popping bubbles. Before World War II, gum was still made from chicle. Latex? One of the advantages of chicle is that it softens when warmed by the heat of your mouth. After World War II, the demand for gum continued to rise, and chemists began looking for an alternative to chicle. In order to make the gum more palatable, manufacturers mix in sugar and flavorings. Your teachers may not allow you to snap-crack-and-pop in school, but there are real advantages to chewing gum. As you chew, the gum stimulates saliva production, which helps neutralize acids in the mouth that can lead to tooth decay. Gum fun facts

12 Preschool Science Experiments These preschool science experiments are perfect for the smallest scientists. Engage little ones curious nature of “why” and use these hands on activities to explain. It is never too early to explore and investigate! Here are some fun ways to introduce science to your preschooler, inspired by We Made That. Affiliate links below If you’re looking for a fun, ready to play, box of science for your kids, check out the Color of Science kit from Kiwi Crate – we LOVE it! 1. 2. 3. 4. 5. 6. 7. 8. 9. 10. 11. 12. Sensory Art Play: Puffy Rainbow Clouds - Twodaloo Last updated Sunday, June 8, 2014 Have you ever wished you could paint a cloud? Even if the idea never occurred to you, I guarantee your kiddos will love this activity. Not only will they be able to create a giant, puffy cloud in a seriously cool way, they’ll be able to add color to their hearts’ content and THEN dive into some ooey, gooey, foamy sensory play. Art, sensory, science, and FUN with only two household ingredients- what more could you ask for? *This post contains Amazon affiliate links. Puffy Rainbow Clouds If you want to make a puffy rainbow cloud, you have to start by making a regular cloud. and our microwave. You can read more about the science behind the Ivory soap experiment at Steve Spangler Science. *Looking for Ivory Soap? . So yeah. The “cloud” of soap has a unique texture- kinda crunchy on the outside and airy/spongy on the inside. on Amazon) and let them loose to paint their clouds any way they pleased. It was so fun! There was giggling… and pouring… and more giggling.

Pot-in-pot refrigerator A pot-in-pot refrigerator, clay pot cooler[1] or zeer (Arabic: زير‎) is an evaporative cooling refrigeration device which does not use electricity. It uses a porous outer earthenware pot, lined with wet sand, contains an inner pot (which can be glazed to prevent penetration by the liquid) within which the food is placed - the evaporation of the outer liquid draws heat from the inner pot. The device can be used to cool any substance. This simple technology requires only a flow of relatively dry air and a source of water. History[edit] There is some evidence that evaporative cooling was used as early as the Old Kingdom of Egypt, around 2500 B.C. Despite being developed in Northern Africa, the technology appears to have been forgotten with the advent of modern electrical refrigerators. Construction[edit] Functioning of a clay pot cooler A zeer is constructed by placing a clay pot within a larger clay pot with wet sand in between the pots and a wet cloth on top.[9] Impact[edit]

What is Mantle of the Expert? » Mantle of the Expert By Viv Aitken (a version of this article originally appeared in the NZ Education Review, July 3 2009) Mantle of the expert … an active, urgent, purposeful view of learning, in which knowledge is to be operated on, not merely taken in (Dorothy Heathcote) Mantle of the Expert has been described as ‘a dramatic inquiry-learning based approach to teaching and learning’ [mantleoftheexpert.com]. First developed by Prof. As experts the children encounter authentic tasks and solve realistic problems related to the project. Thus, instead of learning within discrete curriculum ‘boxes’, children develop skills and deepen knowledge in literacy, numeracy, languages, the arts, technology, social sciences, health and physical education within meaningful contexts and with a clear purpose. The fictional nature of Mantle of the Expert is critical to its potency as a learning tool. Mantle of the Expert is used in hundreds of classrooms around the world at both primary and secondary level. References:

Make Your Own LED Robot Toy - Inspiration Laboratories An LED robot is a super fun toy to make. With the help of an adult, kids can create their own. They’ll think it’s the coolest thing! Make Your Own LED Robot Toy Safety Note: This robot toy has small parts (including coin batteries) that are harmful if swallowed and may pose a choking hazard. The idea for an LED robot cam from Aiden’s desire to make a robot out of a cardboard tube. Here’s What You’ll Need: Cardboard tubePaint (we used glow in the dark)Paint brush2 LEDs2 CR2032 coin batteriesTapeScissors, utility knife, and or screw driver (to make eye holes)Hexbug robot (or you can make your own brush bot) Paint your cardboard tube and let it dry. Use a utility knife or scissors to make 2 eye holes. Connect an LED to a coin battery. Sidenote: Normally when connecting an LED to a battery, you need a resistor. What happens if you connect the LED to the battery backwards? Add the LEDs (along with their batteries) to the cardboard tube. Our robot glows in the dark. Nothing special.