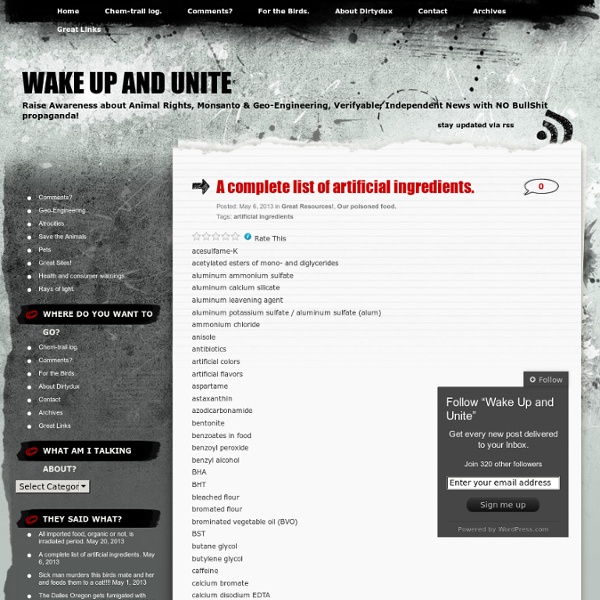 Related:  Health and Healing.. • Poisons in food and beverages

Why Your Doctor Is Not Telling You About Natural Remedies By Liivi Hess,The Alternative Daily, Thanks to Conscious Life News Cut it, burn it, kill it. That is the usual approach to getting rid of cancer. The dreaded diagnosis brings along fears of losing one’s hair, repeated surgeries and prolonged, heavy treatments. But what if there is another way? A way that the mainstream medical world has ignored, discredited or even kept secret from millions of suffering patients.

untitled Stanford Report, March 29, 2016 A case study of a small Wyoming town reveals that practices common in the fracking industry may have widespread impacts on drinking water resources. By Rob Jordan Only one industry is allowed to inject toxic chemicals into underground sources of drinking water – hydraulic fracturing, or "fracking." Healing the body/mind with the willingness to feel As one opens up to the pain of the past one heals so that one can move into the future…. (Update Nov 2015) — It is through such methods of close attention to the body/mind/spirit that my healing has progressed at all. It is the foundation of everything I have learned during this healing process. More Bad News For Diet Soda Lovers Photo credit: bigstock.com Unfortunately, one trip to any restaurant or supermarket will reveal that far too many people still believe that they go for a ‘healthier’ option by choosing a diet soda rather than the regular sugar filled kind. Far too many research studies, especially over the past five years, have shown that artificial sweeteners are very, very dangerous for your health.

10 Vegetarian Bodybuilding Foods to Enhance Muscle Mass Muscle building and vegetarian foods don’t go quite hand in hand because protein is the foundation of muscle building and some of the richest sources of protein are non-vegetarian such as lean beef, pork, turkey and fish. So, does that mean vegans and vegetarian don’t stand any chance of building muscles? The answer is “Yes they do”. Consider some of the most powerful and muscular animals like horses, oxen and gorillas; they are all herbivorous. The diet for muscle building should be planned in such a way that there is always a calorie surplus even after calories are burned through exercise and resistance training.

Energy Drinks: Beyond Dangerous, They Can Be Deadly! Photo credit: bigstock.com Energy drinks: they are all around us. They give us wings, turn us into rock stars and monsters, but are they dangerous? 20 Sources of Pain In The Body Are Each Directly Tied To Specific Emotional States 26th February 2016 By Josh Richardson Guest Writer for Wake Up World Pain is first energy, second perception, and third physical manifestation. 20 Major Water Contaminants on EPA’s Regulation List ... Plus Tips for Cleaning Up Your Drinking Water 1st March 2016 By Mark W. Boutwell