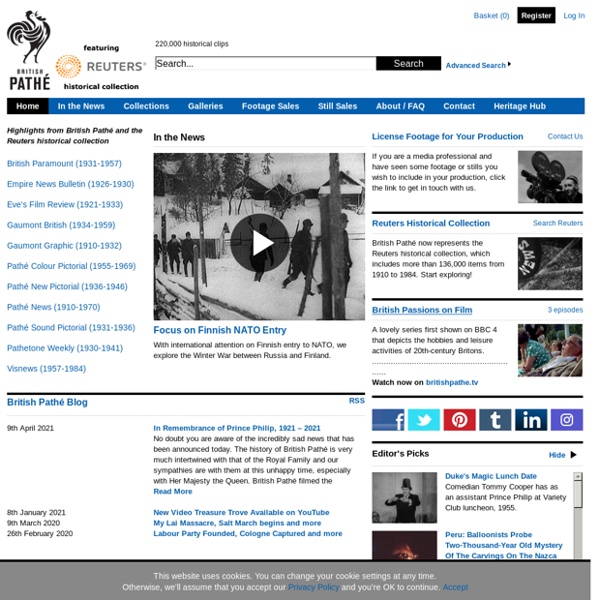 The Christmas Truce THE "Christmas truce" is a term used to describe a series of unofficial cessations of hostilities that occurred along the Western Front during Christmas 1914. World War One had been raging for several months but German and Allied soldiers stepped out of their trenches, shook hands and agreed a truce so the dead could be buried. The soldiers also used that truce to chat with one another and, some claim, even play a football match. Unofficial truces between opposing forces occurred at other times during World War One but never on the scale of that first Christmas truce. Similar events have occurred in other conflicts throughout history - and continue to occur. THE assassination of heir to the Austrian throne, Archduke Franz Ferdinand and his wife in Sarajevo on June 29 1914 sparked a rapid sequence of events which led to the outbreak of World War One.

Library of Congress - Digital Moving Image Collections America at Work, America at Leisure: Motion Pictures from 1894-1915 Work, school, and leisure activities in the United States from 1894 to 1915 are featured in this presentation of 150 motion pictures, 88 of which are digitized for the first time (62 are also available in other American Memory presentations). Highlights include films of the United States Postal Service from 1903, cattle breeding, fire fighters, ice manufacturing, logging, calisthenic and gymnastic exercises in schools, amusement parks, boxing, expositions, football, parades, swimming, and other sporting events. Prolific inventor Thomas Alva Edison (1847-1931) has had a profound impact on modern life. In his lifetime, the "Wizard of Menlo Park" patented 1,093 inventions, including the phonograph, the kinetograph (a motion picture camera), and the kinetoscope (a motion picture viewer). American Variety Stage: Vaudeville and Popular Entertainment, 1870-1920

Aphra Behn Aphra Behn (/ˈæfrə bɛn/;[1] baptised 14 December 1640 – 16 April 1689) was a prolific dramatist of the English Restoration, one of the first English professional female literary writers.[2] Along with Delarivier Manley and Eliza Haywood, she is sometimes referred to as part of "The fair triumvirate of wit." Little is known for certain about Behn's life except for her work as an author and as a spy for the British crown. There is almost no documentary evidence of the details of her first 27 years. She possibly spent time in Surinam, although much of her fiction has become entwined with her apocryphal biography. During the 1660s she was deployed as a political operative in the Netherlands. Facing debt and poverty Behn embarked on a writing career, producing over 19 plays, plus poetry, translation and novels.

Resources on Racism in the Arab Region — Kerning Cultures Source: @ranaabdelhamid, Instagram All of us have a responsibility to read more, speak up, mobilise, and amplify the voices of those whose rights have been stripped from them for generations. It will require our time, our patience, and our efforts to look inwards, and investigate our privileges and our prejudices. It is an ongoing process and one that we at Kerning Cultures are navigating ourselves. We’re looking inwards to reflect on how we can best amplify marginalised voices moving forward, and hope to release material to reflect these efforts. The Beats and Sixites Counterculture The 1960s are associated with what Frank calls ‘the big change, the birthplace of our own culture, the homeland of hip’, a period of various shifts that have shaped our current society[1]. This hints at an underlying consensus that the 1960s were a time of high artistic endeavour, the centre of countercultural resistance, and some of the cultural ripples that are still being felt today. by Jed Skinner What factors influenced this period of time for this decade to be so prominent?

Princeton Digitizes 70,000+ Religious Texts, Letting You Immerse Yourself in the Curious Works of Great World Religions It is maybe easy for those unfamiliar with the study of religion to reduce the academic discipline to a ponderous exercise—self-serious, obsessed with tradition, rendered suspect by histories of violence and highly implausible, contradictory claims. But this is a mistake. For one thing, as scholar of religion Wilfred Cantwell Smith once wrote, “the study of religion is the study of persons”—quite broadly, he suggests, to study religion is to study humanity: anthropology, sociology, history, art, literature, philosophy, mythology, psychology, etc. Studying religion can also be—contrary to certain stereotypes—a great deal of fun. In what other scholarly pursuit, after all, can one read Reginald Scot, Esquire’s 1584 The Discoverie of Witchcraft, L. Austine Waddell’s 1805 The Buddhism of Tibet, and J.G.

A Brief History of Water and Health Attachments( 3 files ): 3 image files Water is life – and life on earth is linked to water. Our existence is dependent on water, or the lack of it, in many ways, and one could say that our whole civilization is built on the use of water. This article examines the influence of water on public health throughout history. Farming and the development of settlements lead to the beginning of the problem that faces mankind today – how to get drinkable water for humans and cattle and how to manage the waste we produce. The availability of water in large quantities has been considered an essential part of civilization throughout the different periods: Roman baths needed a lot of water, as do the water closets and showers used in current Western civilization.

About the History Data Service Collection About the History Data Service Collection The History Data Service data collection brings together over 650 separate studies transcribed, scanned or compiled from historical sources. The studies cover a wide range of historical topics, from the seventh century to the twentieth century. Although the primary focus of the collection is on the United Kingdom, it also includes a significant body of cross-national and international data collections. Examples of topics covered include: nineteenth and twentieth century statistics, manuscript census records, state finance data, demographic data, mortality data, community histories, electoral history and economic indicators.

European Views of the Americas: 1493-1750 Content Includes: More than 32,000 records Coverage of European exploration and portrayals of Native American peoples Subjects include: British in America Commerce Discoveries Dutch in America French in America Great Britain—Colonies Jesuits (and other religious orders) in America Pirates Slave trade This free historical archive is a comprehensive guide to printed records about the Americas written in Europe before 1750 from European Americana: A Chronological Guide to Works Printed In Europe Relating to the Americas, 1493-1750. Try it now for free.

The Story of Propaganda The fact that wars give rise to intensive propaganda campaigns has made many persons suppose that propaganda is something new and modern. The word itself came into common use in this country as late as 1914, when World War I began. The truth is, however, that propaganda is not new and modern. Nobody would make the mistake of assuming that it is new if, from early times, efforts to mobilize attitudes and opinions had actually been called “propaganda.” The battle for men’s minds is as old as human history. In the ancient Asiatic civilization preceding the rise of Athens as a great center of human culture, the masses of the people lived under despotisms and there were no channels or methods for them to use in formulating or making known their feelings and wishes as a group.

The Online Books Page: Search Examples: Entering austen, jane in the Author field finds books by Jane Austen. Entering Baum in the Author field and and oz in the Title field finds L. Herstory Herstory or hertory is history written from a feminist perspective, emphasizing the role of women, or told from a woman's point of view. It is a neologism coined in the late 1960s as part of a feminist critique of conventional historiography,[1] with the word "history" reinterpreted, using a false etymology, as "his story." (The word "history"—from the Ancient Greek ἱστορία, or historia, meaning "knowledge obtained by inquiry"—is etymologically unrelated to the possessive pronoun his.)[2]