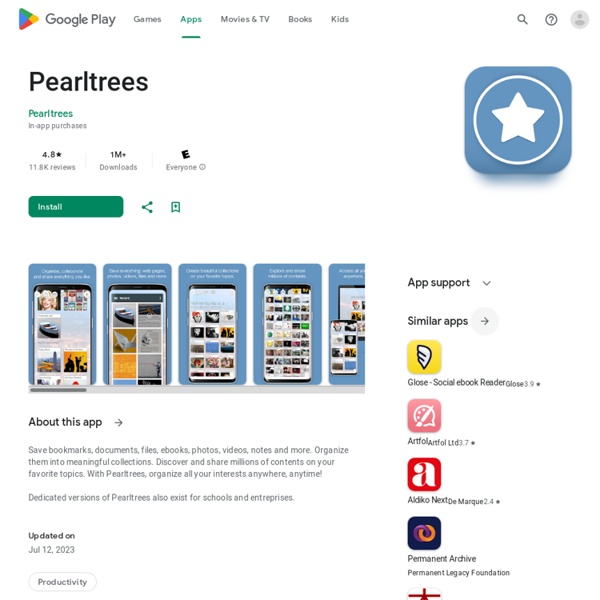 Tumblr Overhauls Its Android App With Path-Like Interface, Brings “Take A Photo” Back To The Desktop Today, Tumblr launched a new version of its Android app. Its interface is the design you’re seeing in many apps lately, mostly made popular by Path. Yes, Tumblr has gone Holo with its UI. That aside, the app feels way more responsive, letting you scroll through all of the cat photos and emo shots of your pals. Its pull-down-to-refresh even got a snazzier animation. The brief note from the Tumblr Staff blog came along with an animation of the new navigation…animations:

8 Top Twitter Track Tools to Organize the People You Follow The proliferation of tools created to support Twitter is astounding due to the early adoption and usage of the Twitter API by developers worldwide. While there are plenty of web applications to choose from to analyze and visualize your activity with Twitter, the Twitter tracking apps that help you manage all of your friends and followers with ease are indispensable. Here’s a rundown of eight of the best Twitter tracking apps to help you keep track of your friends and followers, and decide among them who are adding value to your usage of one of the world’s most popular social networking tools. TwitterKarma GoClass – Applications Android sur Google Play GoClass is a cloud-based teaching and learning application designed to enable teachers to transform their instruction time into a hands-on, participatory learning experience using mobile devices, PCs, and projection screens to connect students and learning content in more meaningful ways. Through GoClass, teachers can create and broadcast content directly to student devices—including tablets, smartphones and PCs—while simultaneously projecting supporting learning media to a shared screen. Virtual white boarding and scribble functionality enable collaborative interaction around learning exercises while real-time assessments and reports give teachers insight into cognitive gaps. If you do not already have a GoClass account, you can set one up for free at the GoClass website. Classroom management features provide instructors insight into student attention and engagement levels while in-class assessments provide instructors with immediate feedback on student performance.

OneDrive – cloud storage - Android Apps on Google Play OneDrive is the one place for everything in your work and personal life. It gives you free online storage for all your personal files so you can get to them from your Android device, computer (PC or Mac), and any other devices you use. With OneDrive for Business, you also get storage for your work files so you can share and collaborate on them with other people at your work or school. Pearltrees launches Android app, makes leap into file management Android users looking for a novel way to organize your information, look no further. Pearltrees announced that its app is finally launching to Android phones, and the platform is adding some Android-like functionality. From the get-go Pearltrees will support 2,500 Android devices and 98.3 percent of Android operating systems, which is commendable considering the varying assortment of screen sizes and should-be-retired Android OS’ that are still in use out there.

Facebook Isn’t Forking Android, They’re Spooning With It Facebook is absolutely, positively, 100 percent not working on a phone. The first rule of tech news remains intact: when a company says they’re definitely not doing something, it’s as sure a sign as you can get that they will eventually do said thing. “Today we’re finally gonna talk about that Facebook Phone…,” Facebook CEO Mark Zuckerberg said only slightly in jest to kick off today’s event. He then went on to give the same type of semantics argument he’s been giving for years.

200 search engines You can place your slogan here. This would also be a great spot for a top product pitch. 200+ Search engines all in one easy to find place The Poetry App – Applications Android sur Google Play Thousands of great poems available for offline reading for free. There are a lot of worldwide poetry classics in one application in your phone or tablet! If you want to add some authors let me know in comments with 5 stars :) Memento Database Memento Database is a highly flexible and customizable personal database management tool. Created for anyone seeking to store various data on their Android devices, the software enables users to create custom libraries with unique sets of data fields, quickly add new entries and, finally, share entries with friends or colleagues, or export them to other systems with just a few taps. A proper database management tool is nothing without corresponding search, navigation and sorting tools.

When is the social curation bubble going to burst? You just can’t move for social curation services right now. The biggest noise might be coming from Pinterest, which is growing like a weed — but whether it’s the new-look Delicious, Switzerland’s Paperli, shopping curation site Svpply, image service Mlkshk or another site, the fact is that almost everybody seems to want to help you save and sort and share the things you find on the web right now. With this swirl of activity, then, it’s no surprise to hear that Parisian service Pearltrees — slogan “collect, organize, discover” — has just raised another $6 million of funding, led by local conglomerate Groupe Accueil. The company, which has been running in public since 2009, welcomed the injection of funds as a way to help expand and scale up its system for bookmarking and organizing, which is based around a clustered visual interface. And it needs that scale. Right now Pearltrees is small and has moderate momentum, building up 350,000 users in the past three years.