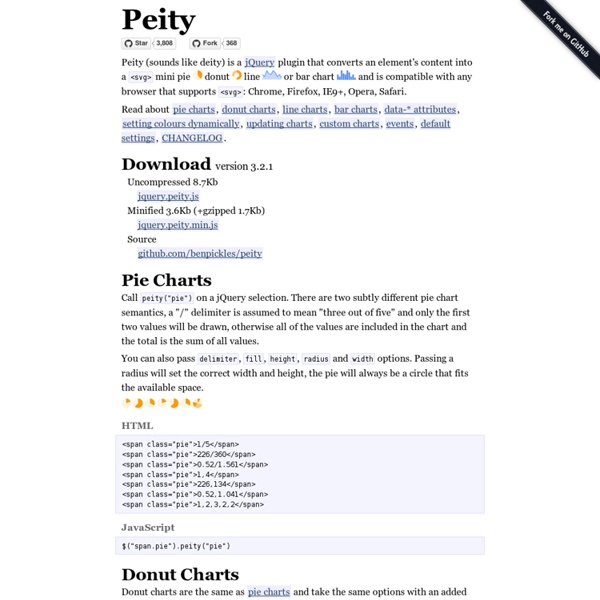 25 Incredible jQuery Plugins for Design Enhancements There are a lot of readymade jQuery plugins from helpful developers and designers who put excellent effects and functionality in their code to help your website. Here are 25 jQuery plugins to perk up your site. You can just download the scripts and add them to the jQuery framework, and it will enhance your web design. 1. Coda Slider is a cool sliding panel plugin widget from jQuery. 2. This enables content or images to be slid vertically or horizontally as you click on the controls. 3. Here’s a great way to view your pics. 4. Fancy Box is a tool that helps you display images, multimedia and HTML content in a Mac type ‘lightbox’ which floats on top of the web page. 5. This one’s a lightbox to show divs, images, or complete remote pages in the style of Facebook. 6. This plugin lets you add layouts easily to your content. 7. Captify is a jQuery plugin to display image captions that come into view as you rollover your mouse on them. 8. 9. 10. jSquares 11. 12. 13. 14. 15. 16. 17. 18. 19. 20.

Apprise - The attractive alert alternative for jQuery The initial release of Apprise has been a major success and is often what this site is most commonly associated with. As far as I've been able to track, Apprise has been downloaded over 23,000 times and has been mentioned in over 46,000 blogs. Which is fantastic, especially for something that I've never been very proud of. I've wanted to update, and change the UI, of this for over a year now. Time has finally permitted and it's, finally, ready. Demos Let's get right down to business. Pretty slick, right? Let's take a peak at the default settings before we change the options around a bit. You'll notice that the buttons are completely customizable and can easily be altered using your own CSS rules. Let's try another demo, but changing the settings around a bit. We're going to use a custom CSS class on our confirm button. You'll see the custom blue button with it's custom text, as well as a goofy little callback function that populates the field below: Response: Using

allynbauer/statuspanic Explore MongoDB What is MongoDB? In recent years, we have seen a growing interest in database management systems that differ from the traditional relational model. At the heart of this is the concept of NoSQL, a term used collectively to denote database software that does not use the Structured Query Language (SQL) to interact with the database. MongoDB is written in C++. MongoDB is an open-source project, with the database itself licensed under the GNU AGPL (Affero General Public License) version 3.0. The AGPL only applies to the database application itself, and not to other elements of MongoDB. Document-oriented databases Document-oriented databases are quite different from traditional relational databases. Another fundamental difference is that document-oriented databases don't provide strict relationships between documents, which helps maintain their schema-less design. This works extremely well for many applications where it makes sense for the data to be self-contained inside a parent document.

Reducing map: jQuery vs jQuery vs JavaScript - O! Mr Speaker! The map/reduce (and their friends filter, each, flatten etc) paradigm provides a general way to manipulate lists and streams. This is particularly well suited to web work - where we spend most of our days playing with lists of DOM elements. Recent versions of JavaScript give us the tools to do this work natively but before that we had to roll our own, or use a library. jQuery has had some similar features since way-back-when, so today we're going to do a bit of "compare & contrast" on the map function: jQuery vs jQuery vs JavaScript! Map iterates over a collections and applies a function to each element - returning a new, usually modified, list. Our tests will examine jQuery's "inline" map with it's global $.map map, and JavaScript's native map function. Our initial task will to be to turn a list of <li> tags into an array of numerical values that each element contains. <ul id="list"><li>1</li><li>2</li><li>3</li></ul> And the required output is a simple JavaScript array: Errrgh... Ok.

PikaChoose - An easy jQuery Slideshow Plugin Measure Anything, Measure Everything Measure Anything, Measure Everything Posted by Ian Malpass | Filed under data, engineering, infrastructure If Engineering at Etsy has a religion, it’s the Church of Graphs. If it moves, we track it. Application metrics are usually the hardest, yet most important, of the three. Meet StatsD StatsD is a simple NodeJS daemon (and by “simple” I really mean simple — NodeJS makes event-based systems like this ridiculously easy to write) that listens for messages on a UDP port. We like graphite for a number of reasons: it’s very easy to use, and has very powerful graphing and data manipulation capabilities. Not only is it super easy to start capturing the rate or speed of something, but it’s very easy to view, share, and brag about them. Why UDP? So, why do we use UDP to send data to StatsD? Measure Anything Here’s how we do it using our PHP StatsD library: StatsD::increment("grue.dinners"); That’s it. Time Anything Too In addition to plain counters, we can track times too: Sampling Your Data

Why Everyone Is Talking About Node The Web Development Series is supported by Rackspace, the better way to do hosting. Learn more about Rackspace's hosting solutions here. On the 20th floor of a San Francisco skyscraper, a handful of developers are working on a new technology that's changing the way real-time web apps are built and how they scale. This technology, called Node.js, is being hailed as "the new Ruby on Rails" by some in the developer community. But it's not a magic bullet, nor is it appropriate for all programming scenarios. Joyent, an SF-based cloud software company, is sponsoring the growth and development of Node. In the process, we learned a lot about how and why Node works for the real-time web — and how Node is changing the way the developer community creates the Internet as we know it. What Makes Node Different Node had a watershed year in 2010, and it's shaping up to be as popular as Ruby on Rails among developers. Then there's the community. Node's Explosive Growth Node for Real-Time Voice Node for Gaming

Marathons, Pirates, and Moving Beyond jQuery Do you know Chris Selmer? He’s one of the Senior Partners here at Intridea. He’s also a person that likes to run, even when nothing is chasing him. So what does this have to do with anything? Well, it was at that conference that some things came together for me. The first session that caught my attention was our own Jerry Cheung’s presentation on Node.js (slides) where he gave a brief tour of Node and went over a handful of example scenarios where Node would work well alongside Rails. In addition to the conference, there were a number of things floating around the Twitterverse that also got my attention. I’m guessing you’re probably starting to notice a theme here. “Shit, I’m one of those jQuery-only jackasses. I tell myself that I write JS every day, but I don’t. Gain a more thorough and detailed understanding of the JS language itselfIncrease my exposure to the plethora of kick-ass new JS tools and libraries Here’s how I plan to do it. So that's my plan.

webdev.stephband.info Download git clone github.com/stephband/jparallax Instantiation jQuery( '.parallax-layer' ).parallax( options ); What does jquery.parallax do? jParallax turns nodes into absolutely positioned layers that move in response to the mouse. With a bit of CSS you can either set up windows to see these layers through, or leave them free to roam about. The diagram on the right illustrates what jParallax does to the html: and here's a demonstration with some images: More demos demos/index.html demos/stalkbuttons.html - multiple parallax. demos/remotecontrol.html - parallax by remote control. demos/thumbnails.html - beautiful interactive thumbnails. demos/target.html - demonstrates how smoothly jParallax handles window resizing. Using jParallax The default behaviour of jParallax is to show the whole width of a layer in response to the mouse travelling the whole width of the mouseport. There are various ways to style jParallax effectively. Options Layer Options Events

Dashing - The exceptionally handsome dashboard framework. OpenStack adds UI, virtual networks with ‘Diablo’ — Cloud Computing News 9 jQuery Scripts to Enhance Your Website Time for a roundup for all the jQuery plugins that have been on the wild for a few weeks. There are getting more and more jQuery plugins coming out just to meet your special needs. In this post, I particularly like Sausage contextual pagination, I think it's a brilliant ideas! Here you go, pretty sure some of them will be really useful. TN3 Gallery TN3 Gallery is a full fledged HTML based customizable jQuery slideshow with slideshow, transitions and multiple album options. Backstretch is a simple jQuery plugin that allows you to add a dynamically-resized background image to any page.