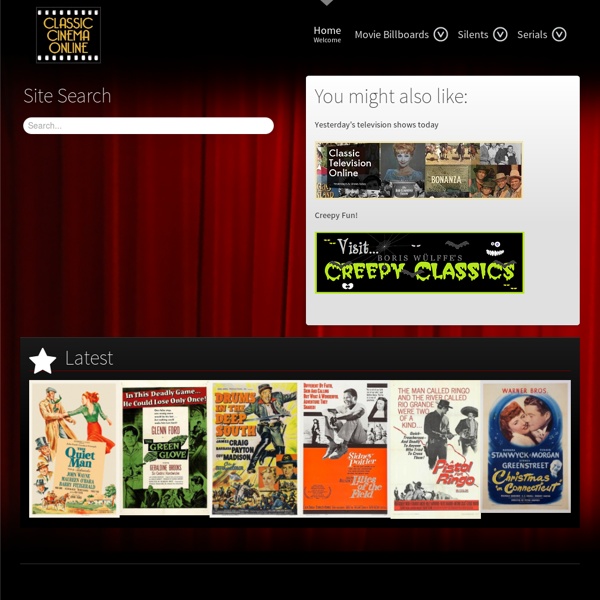 31 French movies to watch. (March Edition) + Where to watch these movies online Reading time: 10 minutes Ready for another helping of French movies? For March, I have prepared a special menu for all fans of French cinéma. Juicy films dished out by cream of the crop directors. Just the right pinch of action, thriller, hot-blooded drama and a huge slice of eye-catching cinematography. You can watch these movies one per day for each day of the month, or you can be a total movie glutton and devour them all in one go. 675 Free Movies Online: Great Classics, Indies, Noir, Westerns, etc. Advertisment Watch 1,150 movies free online. Includes classics, indies, film noir, documentaries and other films, created by some of our greatest actors, actresses and directors. Free Film Noir Movies - 1940's Classic Film A cup of black coffee at midnight and a good old classic movie, it doesn’t get any better. You are free to download and watch any and all of the movies found here, (simply choose save after you click on a title) All movies reside in the public domain. No membership or registration is required.

Wes Anderson's Worlds The world is so big, so complicated, so replete with marvels and surprises that it takes years for most people to begin to notice that it is, also, irretrievably broken. We call this period of research “childhood.” There follows a program of renewed inquiry, often involuntary, into the nature and effects of mortality, entropy, heartbreak, violence, failure, cowardice, duplicity, cruelty, and grief; the researcher learns their histories, and their bitter lessons, by heart. Along the way, he or she discovers that the world has been broken for as long as anyone can remember, and struggles to reconcile this fact with the ache of cosmic nostalgia that arises, from time to time, in the researcher’s heart: an intimation of vanished glory, of lost wholeness, a memory of the world unbroken. We call the moment at which this ache first arises “adolescence.”

The top 50 Greatest Films of All Time from our September 2012 issue Introduction Ian Christie rings in the changes in our biggest-ever poll. And the loser is – Citizen Kane. After 50 years at the top of the Sight & Sound poll, Orson Welles’s debut film has been convincingly ousted by Alfred Hitchcock’s 45th feature Vertigo – and by a whopping 34 votes, compared with the mere five that separated them a decade ago. So what does it mean? Download & Streaming : Moving Image Archive : Internet Archive by Internet Archive You are invited to view or upload your videos to the Community collection. These thousands of videos were contributed by Archive users and community members.