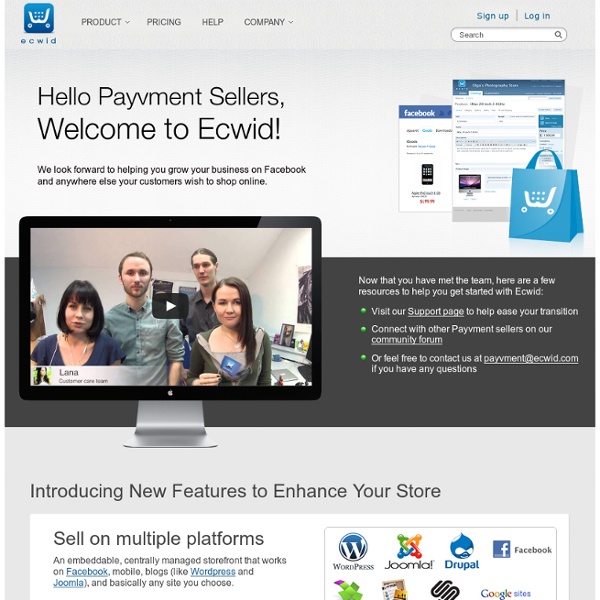 Sell on multiple platforms An embeddable, centrally managed storefront that works on Facebook, mobile, blogs (like WordPress and Joomla), and basically any site you choose. Increase flexibility on option sets and inventory More control over products with attributes (like color and size) and the ability to track separate inventory for those SKUs. Configure shipping rules by geographic location Use your own shipping account for discounted rates and set up rules for accurate freight-pricing based on geographical locations. Sell e-goods Display and sell digital or virtual goods like software, audio, video, e-books and graphics on your storefront and deliver via a download link.

9 Qualities That Will Rock Your Career Success in life is always relative. Some people are happy with small achievements while there are others who won’t be satisfied until mountains are moved. Regardless of our ambitions, our career spans through a series of jobs and experiences that truly polish our personality and will. Free Monthly WordPress & Social Media Webinar! Confused about a plugin? Stumped over a setting? Curious about a Facebook Page? Need advice on branding? Don’t know your widgets from your what’zits? Worldwide - Announcements in Forum : Main Discussion Forum - National As we are nearing the 1 year anniversary of this site, ECCIE's first birthday, we would like to present our members with a comprehensive list which includes many of our general guidelines. These are based on situations that have been most commonly encountered by our members, and also provides answers to the most frequently asked questions. We hope the membership finds these guidelines fair and resonable, sound in logic, and well-aligned with our Mission Statement. Read through them at your leisure, and return for a refresher as often as you like. In the meantime, here are a couple of helpful links, some of which are referenced throughout the following post. I'm placing them here for ease of access...

Starting a Business: Advice from the Trenches If you’re like thousands of other designers, programmers and other creative professionals out there, at one point in time you’ve considered starting your own business. Unlike most, you’ve gone against common sense and decided to open shop for yourself. And not just freelance full-time, mind you, but file for the company name, get some stationery, and wade through the legal mumbo-jumbo. Facebook Integration and Revamped iOS Stores in iOS 6? Source: The Verge Forum. This is a mockup of what iOS 6 and the next-gen iPhone might look like, done by Verge Forum member ”gizmosachin”. Facebook integration and a redesigned App Store will be part of the iOS 6 (codenamed "Sundance") lineup of changes, amidst previously reported updates like the release of a Siri .apk, Siri voice functions on iPad, and a proprietary, in-house maps application with 3D mapping features. Twitter will still be part of the new OS and TechCrunch reports that the company will be chatting more about the "continued partnership" (presumably integration into OS Mountain Lion). Nonetheless, the fact that tons of apps currently use Facebook for new sign-ups and authentication marks the importance of Facebook integration in the upcoming Sundance update. The integration is rumored to include "a system-wide sign-in that would allow iOS users to share content from any apps on Facebook without further identification", TechCrunch elaborates.

Web Design Questionnaires, Project Sheets and Work Sheets - Smashing Magazine Advertisement It’s nearly impossible to provide an accurate quote to a prospective Web design client without first gathering information about what that particular client needs. Some designers do this in either a face-to-face meeting or over the phone, but more often, they have a questionnaire that prospective clients fill out. This is preferable for a couple of reasons; the most important, is probably that this document then becomes an integral part of the design process and is available to refer back to. So the question is, whether you should put that questionnaire up on your website or only send it to prospective clients once they’ve contacted you. There are a couple of reasons you may want to make it available online, but the obvious one is that clients are often eager to get started with their projects; providing the questionnaire online eliminates a step in the pre-contract part of the process.

Why Most People Dream and Only Some Do: The Go-Getter Theory I remember it like it was yesterday. I just won the biggest marble from a boy three years younger than me, and my “best buddy” back then was talking to me on how much he liked his new moped. (He wasn’t legally old enough to drive it on the street, yet he did). He got it from his father who, I believe, up till now still has a bicycle shop. We used to talk about things we’d like to do.

Built-in Action Types If your app publishes on behalf of its users and requires an access token with no expiration time for the purpose of publishing, you should use an App Access Token. An App Access Token is signed using your app secret and will not expire; it will be invalidated if you re-key/reset your application secret. App Access Tokens should only be used when the posting functions are originated directly from your servers in order to keep them private to the app. For example, you should not publish using an App Access Token from within a client such as a native mobile app. Embed a 3D wall of photos & videos on your site Posting a 3D wall on your site is as easy as 1-2-3. Cooliris Express is a Flash®-based version of the Cooliris Wall you can embed into your site for all visitors to enjoy. Create your own Wall with our online builder in three simple steps: Select content Choose from Facebook, Flickr, Picasa, YouTube, or any Media RSS feed. Customize

10 Blogs Entrepreneurs Need to Be Reading See the 2012 edition: 10 Must Read Blogs for Entrepreneurs (2012 Edition) #1. The Toilet Paper Entrepreneur Site: Five Best Facebook Customizers Better Facebook. Why would you use anything else? A couple of those require you to be tied to one browser — Chrome. Advertising on Lovings Adult Guides Standard up to 3 photos, 3 categories $120/mo Exclusive VIP 5 photos, any categoriess+VIP, animated thumb, 2 changes/mo, calendar, slideshow $250/mo Visiting up to 3 photos, 3 cats+visiting, 2 WEEKS ONLY $75/2 weeks (discount for current advertisers on other sites) Text only $75/mo Top 10 listing in one category $100/mo Facebook Lets More People Pay to Promote Posts 18 September '12, 09:22pm Follow Back in May, Facebook started testing a new feature called “Highlight”, which lets you pay actual money to make sure that more of your friends see your status update, in New Zealand (Facebook’s favorite country for testing obscure new features since it’s small but still English-speaking). Today, users of the social network from around the world started reporting that they are seeing the feature. I confirmed with Facebook, and indeed the company has started a broader test for Highlight.

HOW TO: Turn Three Small Brand Photos On Facebook’s News Feed Into One Big Photo Facebook analytics provider Wise Metrics came up with a neat trick for manipulating the way photos are displayed on users’ news feeds so that brands can draw more attention to their posts. Rather than posting albums with three separate photos, Wise Metrics came up with a way to turn three small photos into one eye-catching large image: Resize your picture to 778 pixels wide.Put four vertical guides on your pictures at 241, 267, 510, and 536 pixels (x axis). These guides represent the margins Facebook will insert between your pictures.Create a square selection of 243×243 pixels.