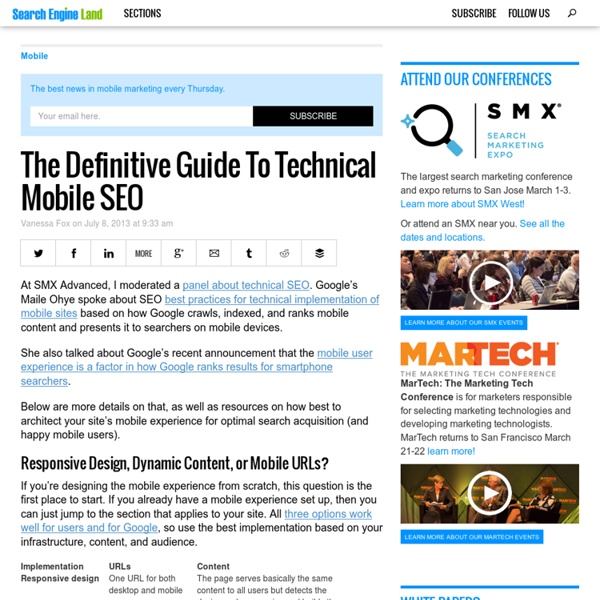 Seven Mobile SEO Myths Exposed Not too long ago, the article Mobile SEO is a Myth got a lot of people fired up about the foolish notion that mobile SEO is a construct developed by salesmen to sell more SEO services. I responded in the comments to the author’s points, and have addressed this point in multiple articles over the years, so I’m not going to argue it here again. While I don’t agree at all that mobile SEO itself is a myth, there are many myths around mobile SEO that practitioners need to be aware of. Here are a few of the most prevalent… Myth #1: A Dotmobi TLD Is Necessary For Indexing & Ranking According to the first result in Google for the query [mobile seo best practices], “the best way to build your mobile web site for SEO is by using the dotMobi domain”. One of the reasons dotMobi gives for this is the following: Futhermore, no DotMobis appeared in the results of an upcoming Resolution Media study that deconstructs the smartphone search results for some top mobile queries in Google.

Mobile Site Configuration & The Vary HTTP Header Yesterday, Google announced more changes to the Google mobile search algorithm , which we can expect to roll out shortly. This update is intended to improve the search experience for mobile users by “address[ing] sites that are misconfigured for smartphone users” — presumably by improving mobile rankings for sites that have been optimized according to their Mobile Optimization Guidelines . In an attempt to prevent some confusion, Google also updated these guidelines to include a list of common mistakes , along with ways to avoid said mistakes. In November 2011, when Google launched the GoMo project to help businesses make “m.” versions of their desktop sites, it seemed like a tacit endorsement for the development of mobile-specific pages from Google, and that was great. The inconsistency in Google’s messaging about mobile SEO leaves large, enterprise-level strategists wondering if it is truly possible to future-proof their mobile search strategy. The Problem With Responsive Design

How to Create a Useful Twitter Retweet Bot Twitter can be used in various, almost countless ways. In this post I am sharing a tip on how to create a useful Twitter RT bot that can be used to collect various Tweets around a keyword or a hashtag and retweet them. And before you start throwing stones at me calling me a Twitter spammer, let me give just a few examples of how this bot can be used to create real value: Think of a Twitter RT bot that will be used to collect Tweets around some SEO conference. So, I guess I made it clear why you might find this tutorial handy. Create a Yahoo! 1. Once you decided to create a Twitter bot, I suppose you already have the topic. 2. The reason I use Yahoo! Use Twitter search to grab the RSS feed. Filter your feed. Drag the Operator > Filter pipe from the navigation and add the following: Now, connect all three pipes (feed, filter and output) together and you are done! 1.First, drag Operators > Loop Pipe and insert it before the “Pipe output” Pipe; 2. 3. (!) And the output looks like this:

Mobile SEO - The tool and optimization guide Optimizing your site for mobile This article will cover each of these steps: Choosing a mobile method Updating website code Verify mobile friendliness Tell Google Optimize 1. There are four main ways a website becomes mobile... Responsive design AMP Dynamic serving Mobile URLs Google recommends responsive design. 1 Responsive design The reason both webmasters and Google like responsive design is because it is the simplest and least risky method. For SEO purposes responsive design is a wise choice. It is recommended by Google It has no SEO risks It is the easiest to implement It is compatible with other methods 2. Often this is much easier than you might expect. Good places to buy responsive mobile ready themes and templates... 3. The way Google determines if a site is mobile friendly depends on several mobile usability issues that are easily tested (the tool at the top of this page tests for all of these factors). The mobile usability issues are... 4. This is bad. Responsive Design Dynamic serving 5.

16 Differences Between Google Mobile & Desktop Search Results In 2012 Google continues to differentiate mobile results from desktop search results, having recently announced interactive answers for tablet and mobile and a test for smartphone icons in smartphone search results. Did you even know that Google mobile search results (whether tablet, feature phone or smartphone) can be different from desktop results? In May of last year, I shared 14 ways they’re different. This year some differences have disappeared and others have taken their place, but in all, there are at least 16 known differences between Google smartphone results and Google desktop results as of this writing. Google announces separate changes for mobile and desktop in their search quality updates, so the fact that there are some differences between mobile and desktop results that marketers should be aware of shouldn’t be too controversial by now. Yet, I know this is a counterintuitive and even an unpopular notion in SEO at the moment. 1. 2. 3. 4. 5. 6. 7. 8. 9. 10. 11. 12. 13. 14. 15. 16.

Vary with Care - IEInternals About the Vary Response Header As described in the HTTP/1.1 specification (RFC2616), the Vary response header allows a cache to determine if a cached (still fresh) response may be returned for a subsequent request, based on whether or not the new request's headers match those that were sent when the the previously response was originally cached. The Vary field value indicates the set of request-header fields that fully determines, while the response is fresh, whether a cache is permitted to use the response to reply to a subsequent request without revalidation. For uncacheable or stale responses, the Vary field value advises the user agent about the criteria that were used to select the representation. The Problem(s) Unfortunately, the WinINET caching engine (below Internet Explorer and other applications) does not cache outbound request headers. Note: IE's isn't the only cache with issues around Vary; see Internet Explorer 6

3 New Ways to Use Twitter at Live Events If you use Twitter, chances are you’ve tweeted from a live event. But there’s so much more Twitter can offer. In this article, I’ll share three secrets you’ve likely never heard of… But first, why do you attend offline events? Is it the lunch (invariably chicken and rice)? No, no and no. And in that regard, Twitter has a starring role. Beyond live tweeting, Twitter tools can give you a whole other level of live event benefits. #1: Follow ‘Em All With BlastFollow When I’m at an industry event where the attendees are almost universally interesting or relevant to my business, I want to follow them on Twitter. It’s an incredibly simple and effective concept. The system also shows you a list of everyone using the hashtag, and notes whether you’re already following them. #2: Keep a Digest With Twapper Keeper Having to decide between concurrent sessions is incredibly frustrating at good conferences. If any of those scenarios sound familiar, please welcome Twapper Keeper into your life.

Mobile SEO - The tool and optimization guide Optimizing your site for mobile This article will cover each of these steps: Choosing a mobile method Updating website code Verify mobile friendliness Tell Google Optimize 1. Choosing a mobile method There are four main ways a website becomes mobile... Responsive design AMP Dynamic serving Mobile URLs Google recommends responsive design. 1 Responsive design The reason both webmasters and Google like responsive design is because it is the simplest and least risky method. For SEO purposes responsive design is a wise choice. It is recommended by Google It has no SEO risks It is the easiest to implement It is compatible with other methods 2. Often this is much easier than you might expect. Good places to buy responsive mobile ready themes and templates... 3. The way Google determines if a site is mobile friendly depends on several mobile usability issues that are easily tested (the tool at the top of this page tests for all of these factors). The mobile usability issues are... 4. This is bad. Mobile page

Mobile SEO Best Practices There is little doubt that mobile search is the hot topic in the SEO world at the moment. Some brands are now finding that more than 30 percent of all searches come from mobile devices, according to Mobile Marketer. It’s fair to say that mobile search is quickly moving out of the Stone Age and into the digital age. That’s the premise of a new insight paper, Mobile SEO Best Practices, published recently by my company, MediaWhiz (disclosure: I lead MediaWhiz’s search marketing and digital strategy divisions). The tips range from the simple (e.g., understanding the differences in how people search on mobile devices compared to their searches on desktops) to the complex, such as best practices to ensure a site’s mobile content can be properly viewed and crawled by search engines. Below are my top-10 tips for effective mobile SEO. 1. Searchers using mobile devices enter keyword queries differently than they do with desktop applications. 2. 3. 4. Web developers should consider vertical menus.

Google's Starting To Enforce Smartphone Penalties: The Evidence In June, Google announced it would be adjusting search rankings appearing on smartphones based on how well the site in question handled the mobile user experience. The company didn’t say exactly when these changes would be rolling out, but only said it planned “to roll out several ranking changes in the near future that address sites that are misconfigured for smartphone users.” These smartphone misconfiguration errors include faulty redirects like app interstitials or homepage redirects, and smartphone-only errors such as unplayable videos, smartphone-only 404 pages and serving 404 pages or redirects when equivalent content exists on the desktop site. It’s anyone’s guess how far away “the near future” is; so at SMX East, I presented results of a random sample of about a hundred queries where sites that exhibited these smartphone misconfiguration errors showed up in smartphone and desktop search results. Related Topics: Channel: Mobile | Google: Mobile | Mobile Search

Tools for Monitoring Conversations in Twitter by Brian Solis Originally published at PR 2.0. We all know Twitter is an essential example of the conversations that help define Social Media. What if we could find the conversations that were important to us, even if we don’t follow the people engaged in those conversations? I think it would transform one of the hottest conversation-based communities on the Web into a goldmine of information and and catalyst for forging new relationships. In August 2007, I wrote about a public discussion including Chris Messina, Stowe Boyd, and myself on the value of creating channels within Twitter. Twitter leads the way for other forms of MicroMedia and represents a white hot medium for connecting people in a way that no one would ever believe possible.Along with its growth and continued rise in global popularity, the noise level in Twitter is also deafening. But up until recently, the conversations taking place on Twitter was progressive yet finite. Enter Hashtags.org. Tags need to be one word for now.