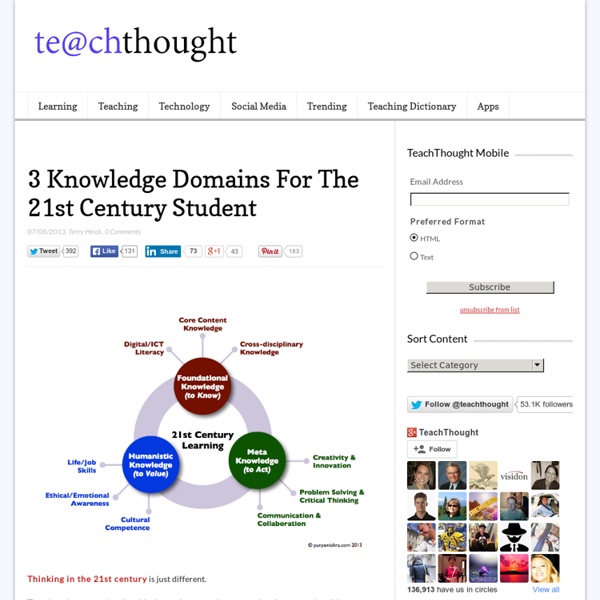 Thinking in the 21st century is just different. That doesn’t mean we’re all suddenly omnipotent cyborgs, nor does it mean we’ve all become mindless social media addicts that spend our cognitive might tapping, swiping, and drooling on our smartphone and tablet screens. But just as the 19th century presented unique challenges to information processing than the 18th or 20th, the 21st century is different than the one before, or that the one that will come after. punyamishra.com recently released the following graphic that I thought was interesting, mainly in that it identified knowledge types for modern learning, settling on Foundational, Humanistic, and Meta Knowledge. 3 Knowledge Domains For The 21st Century Student 1. Digital/ICT Literacy, Core Content Knowledge, Cross-disciplinary Knowledge 2. Life/Job Skills, Ethical/Emotional Awareness, Cultural Competence 3. Creativity and Innovation, Problem-Solving and Critical Thinking, Communication and Collaboration Using This Model In Your Classroom

Eight Ways of Looking at Intelligence Big Ideas In “Thirteen Ways of Looking At A Blackbird,” poet Wallace Stevens takes something familiar—an ordinary black bird—and by looking at it from many different perspectives, makes us think about it in new ways. With apologies to Stevens, we’re going to take the same premise, but change the subject by considering eight ways of looking at intelligence—eight perspectives provided by the science of learning. A few words about that term: The science of learning is a relatively new discipline born of an agglomeration of fields: cognitive science, psychology, philosophy, neuroscience. Its project is to apply the methods of science to human endeavors—teaching and learning—that have for centuries been mostly treated as an art. As with anything to do with our idiosyncratic and unpredictable species, there is still a lot of art involved in teaching and learning.

4 Essential Rules Of 21st Century Learning 4 Essential Rules Of 21st Century Learning by Jennifer Rita Nichols The term “21st century” has become an integral part of educational thinking and planning for the future. Educators and administrators are actively searching for ways to prepare students for the future, and the educational system has been evolving faster than ever before. Various studies have shown us that rote memorization is not an effective learning strategy, and that teacher-centered classrooms may not be the most efficiently structured ones for student engagement. However, despite learning about the skills that students will need to develop to become successful in the 21st century, as well as what beliefs about education may be worth hanging onto or throwing away, schools and teachers are left trying to figure out what their role needs to be in the education of their 21st century students.

25 Critical Thinking Strategies For The Modern Learner Critical thinking is the engine of learning. Within this complex process or so many other relevant themes that contribute to learning: creativity, analysis, evaluation, innovation, application, and scores of other verbs from various learning taxonomies. So the following infographic from Mentoring Minds is immediately relevant to all educators, and students as well. It’s a bit of a mash of Habits of Mind, various 21st century learning frameworks, and the aforementioned learning taxonomies, promoting collaboration, problem-solving, and real-world connections (standard “critical thinking fare” with Habits of Mind-sounding phrases such as “Open-Mindedness”). At the bottom, it pushes a bit further, however, offering 25 critical thinking strategies to help support progressive learning. While a few are a bit vague (#12 says to “Think critically daily,” and #17 is simply “Well-informed”), overall the graphic does pool together several important themes into a single image.

The Best Research Demonstrating That Lectures Are Not The Best Instructional Strategy There has been a fair amount of recent research documenting the ineffectiveness of lectures as an instructional strategy. I thought I’d bring articles about the research together in one place. You might also be interested in The Best Posts Questioning If Direct Instruction Is “Clearly Superior.” Let me know what I’m missing here: A study was just announced a couple of years ago claiming — surprise, surprise — that integrating pair work and small groups in teaching is more effective than straight lectures.

Ten Reasons People Resist Change - Rosabeth Moss Kanter by Rosabeth Moss Kanter | 12:00 PM September 25, 2012 Leadership is about change, but what is a leader to do when faced with ubiquitous resistance? Resistance to change manifests itself in many ways, from foot-dragging and inertia to petty sabotage to outright rebellions. Math, PBL and 21st Century Learning for All Students Considering project-based learning as a way to teach 21st century competencies? Or perhaps you have already used PBL in your schools and want support for your discussions with administrators, parents or board members? In either case, it might be helpful to know about the strong research evidence that PBL, when supported by good professional development, can in turn support the teaching and learning of 21st century skills significantly better than more traditional alternatives. Sometimes skeptics will argue that for certain subjects (e.g., math) or some types of students (e.g., lower performers) are harder to teach using PBL. They might enjoy this video of students building a house as an example of good teaching -- but not necessarily an example that could or should be followed. Others, such as Paul Lockhart in his Mathematician's Lament, suggest that applying math to real world situations could actually hurt creativity.

Making Learning Relevant CC licensed image shared by Flickr user Steve Heath What is the purpose of K-12 schooling? Think for a moment before coming up with an answer. Consider what you believe truly matters. Is it preparation for college? 21st-Century Projects Inspire Global Citizenship Plus Creativity Reforestation plan that was researched in a New York classroom led to 999 trees planted in Cormier, Haiti. Photo credit: Naima Penniman This is the second in a special Edutopia blog series about developing 21st century skills through project-based learning. In the first post, "Yes, You Can Teach and Assess Creativity!" Transform Training: Harness the New Tools for Training to Develop the Best Talent Over the next five years, how you train and educate your staff won’t just change; it’ll transform. What’s the difference? Changing means continuing to do essentially the same thing, only introducing some variation in degree. Transformation means doing something utterly and radically different.

Putting 21st Century Skills to Action Flickr:MuirCeardach What do educators mean when they talk about 21st century skills? If they’re referring to things like collaboration, resourcefulness, smart use of technology, and problem-solving, here’s strong evidence showing how these skills are becoming a natural part of students’ daily lives. Sharon Noguchi writes in the San Jose Mercury News about the changes student activists in the Bay Area are making in their own schools. What You Need To Know About Training Your Employees So They'll Stick Around Employee development is a critical issue for any business: People don’t just stay as they were when you found them--they change and develop over time. So you want them to grow in a direction that suits you, to make the most of their talents, and to add better skills to your organization. Before you think about developing your employee development, though, you have to ask yourself how you can make sure you’re encouraging people in the right direction and not just going through the motions. Why does employee development matter? In one sense it’s obvious why employee development matters.

14 things that are obsolete in 21st century schools Saying that it has always been this way, doesn’t count as a legitimate justification to why it should stay that way. Teacher and administrators all over the world are doing amazing things, but some of the things we are still doing, despite all the new solutions, research and ideas out there is, to put it mildly, incredible. I’m not saying we should just make the current system better… we should change it into something else. I have compiled a list of 14 things that are obsolete in 21st century schools and it is my hope that this will inspire lively discussions about the future of education.

Mobile Learning: Transforming Education, Engaging Students, and Improving Outcomes Education in the United States Education is at a critical juncture in the United States. It is vital for workforce development and economic prosperity, yet is in need of serious reform. American education was designed for agrarian and industrial eras, and does not provide all the skills needed for a 21st century economy.[i] This creates major problems for young people about to enter the laborforce. Mobile learning represents a way to address a number of our educational problems.