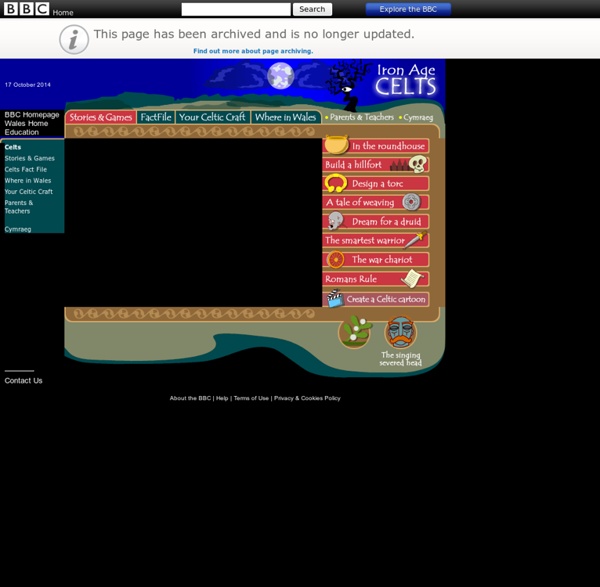 Celtic Art: History, Characteristics What Were the Main Characteristics of Hallstatt Arts and Crafts? Hallstatt art from Central Europe is noted for its high quality iron tools and weaponry, along with its bronze-based manufacture of decorative items and ornamentation. But relatively few silver or Gold objects have been found from this era. Hallstatt was influenced by the militaristic Mycenean art and culture c.1650-1200 BCE which the Celts absorbed as they passed through the Black Sea area. The type-site in Austria, fully excavated by archeologists in the 19th century, included more than 2,000 graves packed with an assortment of functional and ornamental items. Although it evolved and was influenced in several ways during its 300-year lifespan, the Hallstatt art style is typically very geometric. What Style of Celtic Art Came After Hallstatt? Archeologists call the next type of Celtic art style "La Tene", after the type-site located near the village of La Tène on the northern shore of Lake Neuchâtel, Switzerland.

Castle Architecture Although castle architecture developed over the centuries in line with weapons technology, the principles remained much the same. A good castle provided a secure base that could be easily defended. It needed defenses against frontal attack (thick, high walls and secure entry gates) and from undermining (rock foundations or a moat). It furnished means of repelling attackers while minimising exposure of the defenders (arrow loops, crenellation, machicolations, murder holes). It also provided means of escape and of making sorties against attackers (postern gates and secret tunnels). Further, it needed facilities to withstand a siege - a fresh water supply or large cistern and vast supplies of food. A good castle had no dead-spaces - ie external areas that defenders could not fire on, but did provide multiple locations from which vulnerable points could be defended. The best castles provided rings of defence so that defenders could hold out from a citadel even if the outer defences failed.

Ancient Africa for Kids: Ancient Carthage History >> Ancient AfricaWhere was Carthage located? The city of Ancient Carthage was located on the coast of the Mediterranean Sea in what is today the country of Tunisia. At its peak, Carthage ruled a significant portion of the Mediterranean coast including Northern Africa, Southern Spain, and the islands of Sardinia, Corsica, and Sicily. Carthage ruled the land in green at its peak How long did Carthage rule? Carthage was a major power in the Mediterranean from around 650 BCE to 146 BCE. Power and Conflict In 509 BCE, Carthage established a treaty with Rome. Sicilian Wars Between 480 BCE and 265 BCE Carthage fought a number of wars over the control of Sicily. Punic Wars As the Roman Republic rose in power, Carthage became increasingly in conflict with Rome. The Second Punic War took place between 218 BCE and 201 BCE. The Third Punic War and the Fall of Carthage The Third Punic War occurred between 149 BCE and 146 BCE. Government Carthage was initially a monarchy ruled by a king.

Celtic Culture: Characteristics of Visual Art, Language, Religion Tribes of Continental Celts In Central Europe, the original European centre of Celt activity from at least 1000 BCE, Celtic tribes included the Boii, who ranged across the Czech Republic, Slovakia, Hungary, Germany and Austria; the Lugii in Poland; the Vindelici in Germany; the Cotini and Osiin Slovakia; the Eravisci in Hungary; and (from c.335 BCE onwards) the Scordisci, Latobici and Varciani in Slovenia and Croatia. By 500 BCE, Celts were established throughout the territory of "the Gauls", an area corresponding to modern day Belgium, France,and Switzerland, as well as parts of Northern Italy and Northern Spain. In Cisalpine Gaul (the north of Italy), Celtic occupations occurred from about 400 BCE onward until Roman control was asserted fully in 192 BCE, and involved tribes such as: the Graioceles, Salassi, Seguses, Taurini, and Vertamocorii in Piedmont; the Insubres, Orumbovii, and Cenomani in Lombardy; the Boii, Lingones and Senones in Emilia-Romagna. Tribes of Insular Celts

Punic Wars & Hannibal of Carthage - Ancient Rome for Kids Rome was growing. It was starting to expand beyond the southern Italian peninsula. At the same time as Rome was growing so was the city-state of Carthage. Carthage was in North Africa and had sent out its ships and soldiers to many parts of the Mediterranean. Carthage had conquered three islands off the coast of modern day Italy. Rome felt that these islands should belong to Rome. The wars between Rome and Carthage are called the Punic Wars. The Romans still wanted the other two islands, and Carthage wanted Rome to stop expanding towards Africa, so everyone knew that there would soon be a second war. There soon would be. At the end of the First Punic war, Carthage's decided to expand into Iberia (Spain). Hannibal: Hannibal was a great general. Carthage wanted to conquer all of Iberia and Hannibal set about doing just that. Because of his losses as he crossed the Alps, Hannibal's army was not strong enough to attack the city of Rome. The war was over. Third Punic War.

celtshistory [Top] The Celts (pronounced with a hard C like "Claymore") appear in Europe as a group of peoples who spoke languages in the Celtic branch of the Indo-European family of languages. Other branches of the Indo-European family are Albanian, Anatolian, Armenian, Balto-Slavic, Germanic (includes English), Greek, Indo-Iranian, Italic (Latin based) and Tocharian. Celtic is closest to the Italic group. European languages not belonging to the Indo-European group are Basque, Hungarian, Finnish, Estonian and Lappish (also called Saami). The Celts evolved from the Urnfield Culture (given that name because of the burial system of cremation and placement of ashes in urns which in turn were buried in fields...) much earlier than the Romanized Celtic world of the late 500-400 BC. I use the word "evolve" because it is difficult to define just when the Celts became a culture unto themselves. Around 1500-1000BC, the Celts lived in an area which today is mostly in Eastern France. To the Gaelic homepage

Ancient Egypt Welcome to Ancient Egypt! Hi, I’m Professor Rosalie David. I'm Professor of Biomedical Egyptology at The University of Manchester. My work includes research and lecturing. I lead a team, "The Manchester Mummy Project", which uses scientific methods to examine Egyptian mummies so that we can discover as much as possible about disease, diet and religious and burial customs in ancient Egypt. Egyptology at Manchester Manchester is the only place in the world where you can take a university degree in "Mummy Studies". School Days When I was six years old, our teacher showed us some pictures of Egyptian pyramids, and I decided then that I wanted to be an Egyptologist! Mummy Research Our research adds new information to Egyptology. "What illnesses did the Egyptians suffer from?" "Can we trace some diseases through from ancient to modern times?" "What medical treatments did the Egyptians use, and would they work today?" "How did the Egyptians mummify their dead?" Learn about Egyptology

Celtic Interlace Designs The second view maintains that Celtic interlace originated in the Middle East as part of the artistic tradition of the Eastern Roman Empire in Byzantium (Constantinople, now Instanbul). Byzantine artists had already begun to use interlace in the development of their preferred form of two-dimensional art - the latter being fully exploited in the icons, mosaics, calligraphy and illuminations of the later Eastern Orthodox Church. The proponents of this view cite Christian Coptic (Egyptian) and Syrian illuminated texts, produced during the 5th and 6th centuries, as the true precursors of Western Gospel manuscripts like the Book of Durrow. Copies of such Middle Eastern manuscripts were probably introduced to Ireland sometime between 630 and 690 by religious envoys or missionaries returning from Rome or Siena. The case for a Levantine origin of Celtic interlace is strengthened by two stylistic arguments.

Changing Times Welcome to the Changing Times section - one thousand years at the press of a button with lots of pictures! Please select an option from the ones below to discover the 15 themes within each section. Click on the timeline to find out dates and which king or queen was on the throne from Norman times to the present day. Related worksheets: Normans (PDF 137 KB) Medieval (PDF 140 KB) Tudors (PDF 140 KB) Stuarts (PDF 139 KB) Georgians (PDF 140 KB) Victorians (PDF 142 KB) Twentieth Century (PDF 143 KB) In Search of Ancient Ireland . Technology by Carmel McCaffrey and Leo Eaton ometime in the fifth millennium B.C., new technology arrived in Ireland, carried by immigrants from Europe or native Irish who had learned new skills overseas. This marked the beginning of Irish agriculture, the ability to grow cereal crops and raise livestock. Metal came first to Ireland around 2400 B.C. as the Bronze Age spread north from the Middle East. Not only were metal products hard to make, they were not practical; stone axes still worked better for everyday use. Gold, mined in Ireland, was shaped into beautiful lunulae (moon disks), probably worn as decoration by tribal leaders and priests. The Irish Bronze Age may have ended in economic collapse, since technology declined as contact with Europe lessened around 500 B.C.