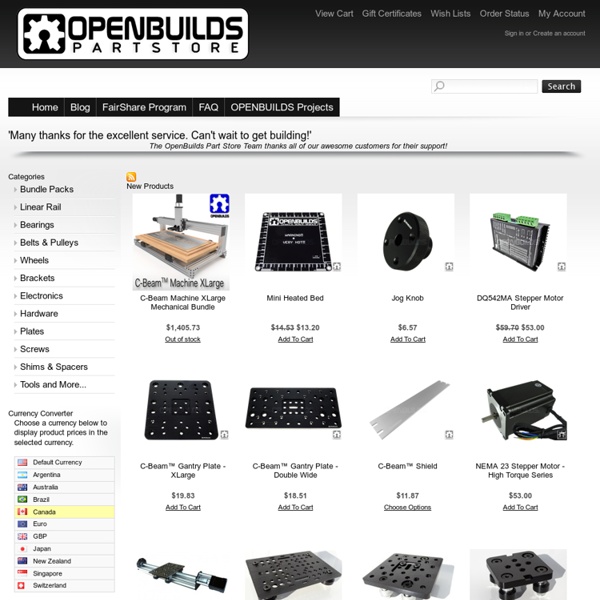 Desktop CNC Mill Kit - Shapeoko 2 Product Details IMPORTANT NOTE REGARDING SHIPPING: Mechanical Kits have a 1 week lead time, Full Kits have an estimated lead time of 4-5 weeks Shapeoko 2 is a simple, low cost, open source CNC milling machine kit that can be built over a weekend. Assembly is required before you can use it. This is version 2 of the fastest selling CNC machine in the history of the world. Blog January 22nd, 2015 by bdring It’s ORD Camp time again this weekend. Every year I have done a gonzo build of some type of CNC machine. This year I only had a few hours to spare, so I wanted something simple. These are never meant to be practical machines, just conversation starters. This was hacked together and programmed in about two evenings with stuff I had laying around, but working at Inventables means there is a lot of cool stuff “laying around”.

OpenBuilds V-Slot™ Corner Connectors by OpenBuilds The concept behind the system is to simplify the building process while adding more flexibility to the V-Slot modular building system. These corner connectors will allow for lightning fast assembly of machine and project designs. They can be stacked to connect all sizes of V-Slot. This system is also being used as a wheel block, turning the V Slot itself into not only the linear rail, but the gantry carts as well. You do not need a proprietary connector for each different size of V-Slot. Jonathan Keep, Self build Delta 3D printer Annoyed and frustrated by 3D Systems buying out and then stopping the production of the RapMan 3D printer. This was the first kit printer Belgian design duo Unfold adapted to print with clay and has subsequently been copied and widely used by others, I decided to develop my own replacement 3D printer. Based on the delta type of 3D printer my aim has been to use parts that can either be made with basic DIY tools and skills, or ordered off the internet. The design is specifically for printing in clay but could be adapted to work with other materials.

Moteurs pas à pas - SOPROLEC en Welcome Log in Your account Your cart 0 product products 0 product 0.00 € Menu Flux 3D: A cheap, modular 3D scanner, printer and laser engraver A Taiwanese team has developed the Flux 3D, a cheap all-in-one 3D printer, scanner and laser engraver that, thanks to its modularity, also leaves room for further expansion. The device also allows users to create, share and download designs directly from their mobile devices and connect to the printer via Bluetooth for more convenient operation. View all New Part Day: Silent Stepper Motors Some of the first popular printers that made it into homes and schools were Apple Imagewriters and other deafeningly slow dot matrix printers. Now there’s a laser printer in every office that’s whisper quiet, fast, and produces high-quality output that can’t be matched with dot matrix technology. In case you haven’t noticed, 3D printers are very slow, very loud, and everyone is looking forward to the day when high-quality 3D objects can be printed in just a few minutes.

Acrylic Material for Laser Cutting Clear Translucent White Diffuse White Crawlbot The Printrbot Crawlbot is a CNC router that cuts 4’x8′ material, yet occupies a small footprint in your garage. The Crawlbot recently won “Best Large Format CNC” in Make Magazine’s 2015 Digital Fabrication Shootout. Out of the box, the Crawlbot cuts 40″ x 80″ out of a 4’x8′ sheet of plywood. We will provide the file to make your own table that extends the capabilities of the Crawlbot to fully cut an entire 4’x8′ sheet of plywood with no waste.

TRINAMIC Motion Control Releases Streamlined TMC2100 Stepper Motor, Embraced by 3D Printing Community Developers can breathe a small sigh of relief today as they can look forward to easier and much faster redesigns with less stress on deadlines due to a new stepper motor just released by Germany’s TRINAMIC Motion Control. The TMC2100 is a single-axis stepper motor control and driver IC, unique in both its quality and extreme simplicity regarding both use and setup. The new stepper motor features: Integrated MOSFETs to drive RMS motor current to 1.2AConfiguration via seven pins on the driver ICNo required intervention by host CPUUp to 256 micro-steps per full step to maximize rotational precisionTRINAMIC’s patented stealthChop IP, eliminating motor noise This level of simplicity is indicative of many contemporary, smarter technologies currently evolving within many industries.

How to make interlocking acrylic designs – Ponoko Community Hub The importance of radii We've written about using 'nodes' with 3D objects made from wood before, but suggested it may not work for acrylic because it is more brittle and less forgiving. However, after working with Drownspire to develop their Vambit toy into a product we could give away at Makerfaire, I discovered that you can successfully use nodes when making with acrylic.

Platform CNC Production Run Platform CNC Production When I designed and built this machine for myself, I had no idea of the overwhelmingly positive response it would receive! After being asked by friends and people in the online community if I could reproduce one for them, I decided to do an Initial Run of 5 machines. By the time I placed the order, I had 12 people signed up and about 20 people on a waiting list! Fast forward a year: I have continued to produce these machines in batches of 12 and have just completed the 15th Production Run!