The Bank of Mom and Dad - Personal Finance - Debt - SmartMoney.c 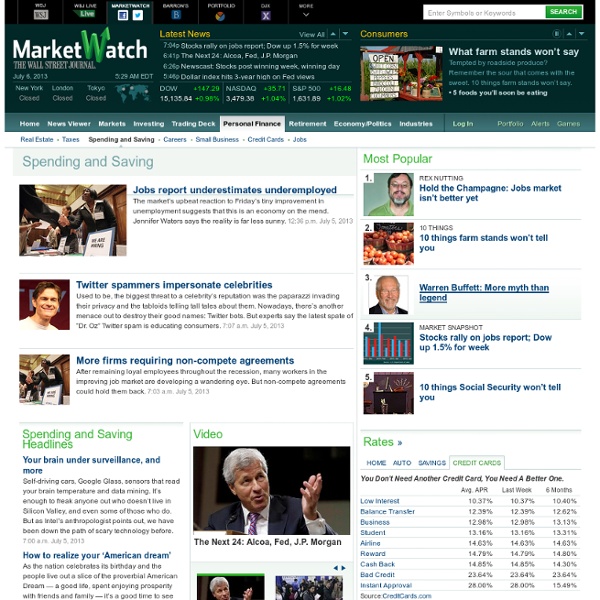 FriendsClear.com - Interview with Jean-Christop I invite you to watch the video I shot last week in Paris with Jean-Christophe Capelli. I met JC for the first time in NYC, the day before the very first Finovate event back in 2007. Time flies... I am glad we finally managed to shoot an interview about the innovative FriendsClear.com, the first P2P Lending marketplace in France.We covered a lot during this session. I asked JC to introduce FriendsClear, talk about the challenges he had to overcome to launch in France, the partnership he managed to put in place with Credit Agricole PG to make the service available to the French SMEs, the successful contest they launched to increase the visibility of the service (with 120 applications from startups and SMEs).Even though Jean-Christophe couldn't share much stats except they are closing on to 500,000 euros of loans, he shared some exclusive info on their international growth strategy... Merci encore JC! Contest - mon projet pro

Student Loans Are Holding Back Economic Recovery, CFPB Says A top regulator is once again sounding the alarm on student debt, warning that the ballooning market is putting the economic recovery on hold. "Policymakers cannot sit by as passive observers," Rohit Chopra, student loan ombudsman for the Consumer Financial Protection Bureau, recently told the Financial Times. His remarks came a few days after the CFPB released a report likening risky student loan practices to subprime mortgage lending, which contributed to the housing bust. "Borrowers may be paying higher rates than what their risk profile justifies," Chopra said. Chopra told the FT that overly high interest rates may be preventing student loan borrowers from buying first homes. Many economists say that it is necessary for would-be first-time homebuyers to start buying in order for the housing market and broader economy to recover. This isn't the first time that Chopra and the CFPB have sounded the alarm about rapid growth in student loan debt.

Prosper raising $13.3 – $15.8M round for peer-to-peer lending ma Peer-to-peer lending marketProsper is in the midst of raising a $13.3 – $15.8 million fourth round of funding, the company announced today. The company’s lending market currently has nearly a million members, and so far, those members have funded 32,000 loans totaling more than $193 million. The company said it has signed a letter of intent with new and existing investors to raise the round, which is expected to close by April 15. To date, the San Francisco-based company has raised $43 million. Prosper announced in November that it had raised $1 million in a third round. Competitor Lending Club raised $12 million in March, 2009, and has raised more than $22 million in all.

Saddled with student debt? Welcome to America's screwed generation | Natalia Antonova Graduation … an expensive business. Photograph: Brooks Kraft/Sygma/Corbis I may not look like it, but I am a modern-day serf. Saddled with thousands of dollars of student debt – debt that has been stripped of all consumer protections and is non-dischargeable in bankruptcy – I am part of a screwed generation. Earlier this year, the collective student loan burden in the United States passed the $1tn mark. Analysts are increasingly referring to a student loan bubble that could result in a crisis similar to the subprime mortgage crisis of 2008. A bad job market for recent graduates and skyrocketing education costs have greatly exacerbated the problem. My own student debt saga began in 2002, when my family's finances went south after I had successfully applied to Duke University in Durham, North Carolina. Yet following graduation every major decision I made was shaped by my terror of defaulting on the loans. The trouble with serfdom is that serfs don't last very long.

Here Comes the P2P Economy - The Conversation - Harvard Business by Stan Stalnaker | 9:24 AM February 26, 2008 Peer-to-peer, or P2P, networks have thrown the media industry into turmoil, changing the flow of information from a one-to-many model (with newspaper publishers, Hollywood studios, and big music companies as the sources) to a many-to-many model (with blogs, YouTube, and file-sharing forums as the venues). The ability of individuals to both consume and create content–news, movies, and music–greatly threatens traditional players. A shock like the one that jolted the media is poised to strike other industries, perhaps more disruptively. Indeed, P2P financial systems are set to reprise in the banking industry what has happened in media. It is only a matter of time before these digital systems close the arbitrage enjoyed by large banks, which lend at up to 15% interest but pay only about 5% on capital. An even greater shock could hit the energy industry, transforming it into a network that would make the current electricity grid seem rudimentary.

Data show student borrowers over 30 a growing population As the recession descended, the number of student borrowers continued to grow -- and more than ever, those carrying balances are likely to be in their 30s or older, according to new data from the Federal Reserve Bank of New York. The New York Fed, which has become a chronicler of student loans in America through quarterly reports, recently released historical charts showing the growth in borrowers, balances and delinquencies over the past seven years. They show a steady upward march toward more borrowers, more loans and more debt. Since 2005, 14 million more people have taken on student debt. The majority of borrowers still paying back their loans are in their 30s or older. And the average debt per borrower has steadily climbed, from $15,651 in the first quarter of 2005 to $24,301 in early 2012. Despite the recent attention paid to recent college graduates burdened by six figures of debt and unable to find jobs, borrowers under 30 are doing better than most on paying back their loans.

openmoney The Looming Student Loan Bubble – Almost 50% of Borrowers Not Making Payments ‘For many, college is an overpriced scam. The quality of education has decreased precipitously as the government has poured money into student loans and the whole media, government and education establishment has promoted college for EVERY kid with an IQ over 75. This a ridiculous scenario, and it’s not helped by the admission of countless “students” on “athletic scholarships.” So many of these athletes have no business stepping within 5 miles of a university, let alone being handed a degree after 5 years of tutoring, coaching, and cheating. They get in for free, while real students have to pay tens of thousands for a degree, and then graduate and find that they can’t make more than $12 an hour, which doesn’t allow them to make a dent in their student loans.’

35+ Social Lending Platforms Around the World I’ll be giving a presentation on ‘the future of money’ in a few months, and am trying to wrap my head around all the emerging disruptive tools and services that are shaking up the financial industry. I plan to do a few posts covering these areas, and hope we can have some interesting discussion about what it means and where we’re going. In the meantime, here’s a general resource of social lending platforms/marketplaces across the globe. If you’re aware of any I’ve missed, please let me know! Thanks. Social Lending Social Lending, or peer-to-peer lending, essentially brings individuals together to lend and borrow money directly from each other, cutting out the middle man (the bank). 1. Twitter: @auxmoney Facebook: auxmoney-GmbH Location: Germany 2. Location: Italy 3. Facebook: Cashare Twitter: @cashare Location: Switzerland 4. Twitter: @communitylend Location: Canada 5. Twitter: @Comunitae Location: Spain 6. Location: India 7. Location: Korea 8. Location: Brazil 9. 10. Location: Finland 11. 12.

7 Legitimate Work-at-Home Jobs for 20-Somethings One ad reads, "I will juggle three fire clubs with a firework on my head for $5." Another offers a 45-minute Spanish lesson on Skype or professional advice on buying real estate. All are on Fiver.com where anybody can sell a service for $5, many through the Internet. The website is indicative of how the work-at-home job scene has evolved in just the last few years. "We are now seeing younger and younger people working from home," says Michael Haaren, co-founder of RatRaceRebellion.com, which has tracked 17,000 telecommuting jobs since 2007. "Three years ago, the person who typically worked at home was a mom who wanted to be there for her children. Many young people have turned to telecommuting due to the lack of entry-level jobs in a struggling economy, Haaren says. [Related: High-Paying, Low-Stress Jobs] From more lucrative positions to the usual telecommuting stalwarts, Bankrate took a look at seven industries where a computer in a spare bedroom could mean lots of spare change.

Crowdfunded windmill will generate energy for members’ own use Gain instant and exclusive access to over 5,000 of the most creative ideas, innovations and startups on our database and use our smart filters to take you direct to those that are most relevant to your industry and your needs. Not interested? You can still browse articles published in the last 30 days from our homepage and receive your daily and weekly fix of entrepreneurial ideas through our free newsletters. Student Debt- Get it Paid Now! "Free Downloads!" Receive downloads of my 3 most popular resources that will save you $THOUSANDS!!! You'll also get a weekly update every time I publish. Your email will never be shared Want to get out of student loan debt without taking 20 years to do it? Then read on! If you have student loan debt from taking out student loans for college, you’re not alone. That struggle has become a huge factor that is holding back economic recovery for individuals, and for the country as a whole according to this article at Huffington Post. >>>Opt in to Email Updates RSS<<< Student Debt is Keeping People in Bondage Total student debt has now exceeded the Trillion dollar mark, and there are no signs that it’s letting up any time soon. So how did all this happen? This easy money allowed more people to go to college (a good thing). Easy student loans have created a vicious cycle that has turned into a student debt bubble, much like the housing bubble. When money is too easy to get, things get out of hand.