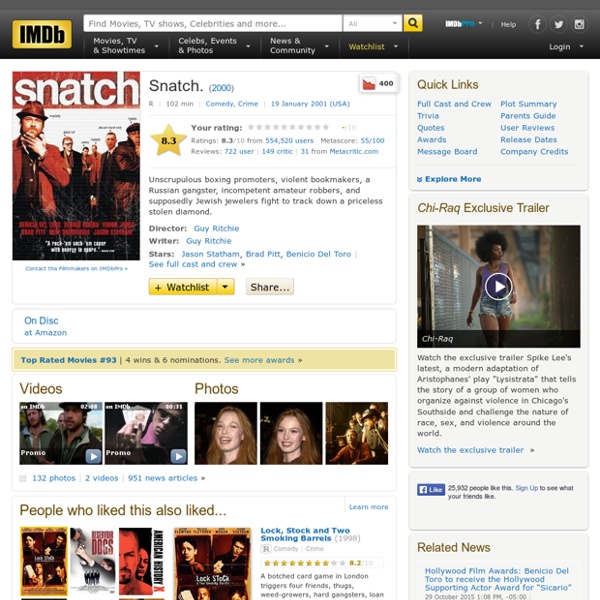 Edit Storyline Turkish and his close friend/accomplice Tommy get pulled into the world of match fixing by the notorious Brick Top. Things get complicated when the boxer they had lined up gets badly beaten by Pitt, a 'pikey' ( slang for an Irish Gypsy)- who comes into the equation after Turkish, an unlicensed boxing promoter wants to buy a caravan off the Irish Gypsies. They then try to convince Pitt not only to fight for them, but to lose for them too. Whilst all this is going on, a huge diamond heist takes place, and a fistful of motley characters enter the story, including 'Cousin Avi', 'Boris The Blade', 'Franky Four Fingers' and 'Bullet Tooth Tony'.

Apocalypse Now The film has been cited for the problems encountered while making it. These problems were chronicled in the documentary Hearts of Darkness: A Filmmaker's Apocalypse, which recounted the stories of Brando arriving on the set overweight and completely unprepared; costly sets being destroyed by severe weather; and its lead actor (Sheen) suffering a heart attack while on location. Problems continued after production as the release was postponed several times while Coppola edited millions of feet of footage. Upon release, Apocalypse Now earned widespread critical acclaim and its cultural impact and philosophical themes have been extensively discussed since.

Der Soldat James Ryan (1998 The Godfather Part II A sequel, The Godfather Part III, was released 16 years later in 1990. Plot[edit] In 1901 Corleone, Sicily, nine-year-old Vito Andolini’s family is killed after his father insults local Mafia chieftain Don Ciccio. He escapes to New York and is registered as "Vito Corleone" on Ellis Island. In Miami, Michael tells Roth that Pentangeli was behind the assassination attempt; he then tells Pentangeli that Roth ordered it and asks him to cooperate.

Fight Club (1999 Goodfellas Scorsese initially named the film Wise Guy, but postponed it, and later he and Pileggi changed the name to Goodfellas. To prepare for their roles in the film, Robert De Niro, Joe Pesci, and Ray Liotta often spoke with Pileggi, who shared research material left over from writing the book. According to Pesci, improvisation and ad-libbing came out of rehearsals where Scorsese gave the actors freedom to do whatever they wanted. The director made transcripts of these sessions, took the lines he liked best, and put them into a revised script the cast worked from during principal photography. Plot[edit]

Donnie Darko - Fürchte die Dunkelheit (2001 Taxi Driver Taxi Driver is a 1976 American crime/vigilante film directed by Martin Scorsese and written by Paul Schrader. Set in New York City soon after the end of the Vietnam War, the film stars Robert De Niro and features Jodie Foster, Harvey Keitel, Cybill Shepherd, Peter Boyle, and Albert Brooks. It is regularly cited by critics, film directors and audiences alike as one of the greatest films of all time. Nominated for four Academy Awards, including Best Picture, it won the Palme d'Or at the 1976 Cannes Film Festival. The American Film Institute ranked Taxi Driver as the 52nd greatest American film on their AFI's 100 Years…100 Movies (10th Anniversary Edition) list. In 2012, Sight & Sound named it the 31st best film ever created on its decadal critics' poll, ranked with The Godfather Part II, and the 5th greatest film ever on its directors' poll.