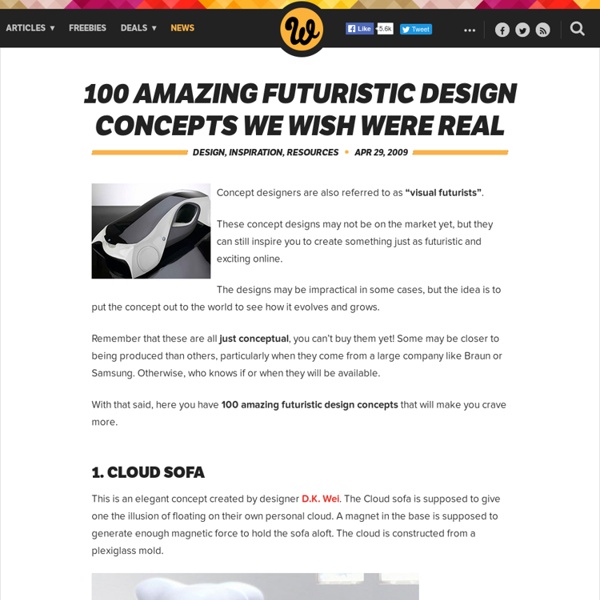 Concept designers are also referred to as “visual futurists”. These concept designs may not be on the market yet, but they can still inspire you to create something just as futuristic and exciting online. The designs may be impractical in some cases, but the idea is to put the concept out to the world to see how it evolves and grows. Remember that these are all just conceptual, you can’t buy them yet! Some may be closer to being produced than others, particularly when they come from a large company like Braun or Samsung. Otherwise, who knows if or when they will be available. With that said, here you have 100 amazing futuristic design concepts that will make you crave more. 1. This is an elegant concept created by designer D.K. 2. This concept design was inspired by the curves and tapering of the Macbook Air coupled with the look of an iPod Touch. 3. iPhone 4G Concept This fantasy iPhone mimics both the look of Mac OS/X and the aluminum case of a MacBook Pro. 4. 5. 6. 7. 8. 9. 10. 11. 12.

Prepare Yourself For Skies Filled With Flying Robot Jellyfish Using hobby airplane parts worth about $15, a postdoctoral researcher at New York University built a tiny, super-light flying robot that fundamentally rethinks how small aircraft can fly. Many drones mimic insects for design inspiration, but that line of thinking also poses challenges: Bugs are unstable flyers and have to use a sensor in their brains to keep themselves upright. As they tip to one side, they use their wings to flap back into place. Insect-inspired drones also have to use sensors, making them more expensive. The jellyfish-like design, on the other hand, stays stable just because of how it moves.

Why Smaller Plates Can Help You Lose Weight It's always nice to have someone to blame for a problem, so if you're struggling to keep off weight these days, feel free to direct some spite at Joseph Delboeuf. (Don't feel too bad--he's long dead.) Delboeuf was a 19th-century Belgian philosopher who discovered that people perceive two identical circles differently when they're surrounded by concentric circles of different sizes. The effect is called the Delboeuf illusion. It's why the black circle on the left looks smaller than the one on the right: Here's where your waistline comes in.

Rocket Racing League The prototype Rocket Racer, a modified Velocity SE climbing to 10,000 feet on its first full flight, October 29, 2007 at the Mojave Spaceport. The Rocket Racing League is a racing league that plans to use rocket-powered aircraft to race a closed-circuit air racetrack. Founded in 2005, the league made its first public flights in 2008 and is working to begin regular racing seasons. The World's Best Photos of cosplay and skyrim Flickr Hive Mind is a search engine as well as an experiment in the power of Folksonomies. All thumbnail images come directly from Flickr, none are stored on Flickr Hive Mind. These photos are bound by the copyright and license of their owners, the thumbnail links take to you to the photos (as well as their copyright and license details) within Flickr. Because some other search engines (Google, etc.) index parts of Flickr Hive Mind, you may have been led here from one of them. Welcome to Flickr Hive Mind, almost certainly the best search engine for photography on the web. If you are a Flickr user and use Flickr Stats you may have seen people being led to your photos via Flickr Hive Mind (as a Referrer).

An Evolutionary Theory For Why You Love Glossy Things The evidence that people are drawn to shiny things is all around us: from the pages of lifestyle magazines to the page stock of lifestyle magazines. One logical explanation for this cultural affection is that we've come to associate gloss with wealth and luxury. If the story ended there, though, we wouldn't expect very young infants to enjoy shiny things as much as they do, nor would we expect remote tribes like the Yolngu of Australia to celebrate shimmering aesthetics as much as they do. There's clearly a bit more to glitter than gold. Recently a group of marketing scholars considered the question from an evolutionary angle.