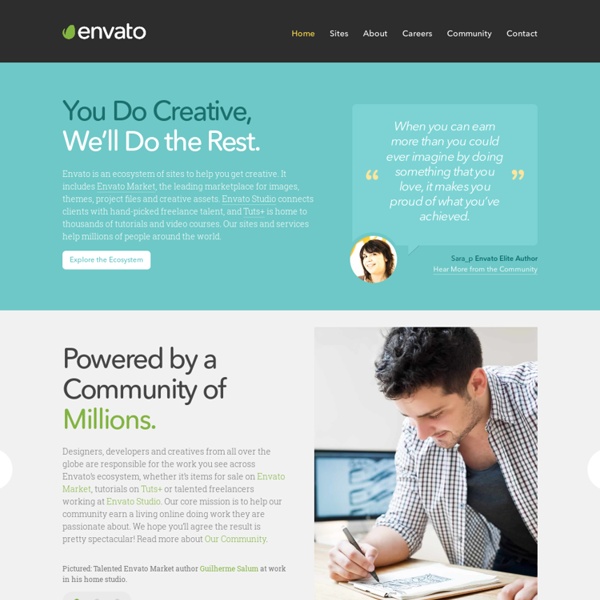 Originally founded by three designers, Envato has always been a company by creatives, for creatives. Our earliest recruit, Ryan Allen, quickly moved the company to Ruby on Rails and helped start the strong developer culture that is a huge part of Envato today. We believe these roots are important in ensuring our focus and understanding of our community. We may have grown a lot over the years, but dev and design is in our DNA. Find out more about Envato’s History. Pictured: Cofounders Jun, Cyan & Collis with Envato’s COO, Vahid Ta’eed

3 Simple Ways to Improve Low Resolution Images (and Typography) It’s not a miracle, but these helpful tips can improve the quality of an image when enlarging from a low-resolution sample. It’s surprisingly simple and quite easy. Fire up Photoshop and check it out for yourself! At How-To Geek, we’ve written extensively about how it’s impossible to “enhance” images and reclaim detail that is lost or isn’t there to begin with. Are we changing our tune? Nope, there’s nothing magical about these tips, except for the improved results you’ll get when you improve your own low resolution images. Fixed Background Scrolling Layout A fixed background image scrolling layout with 100% height panels and smooth scrolling. View demo Download source A simple scrolling layout with fixed background images using background-attachment: fixed and a navigation.

'Whodunnit' awareness test: How many changes can you spot? The clip initially appears to be a scene from a cliched murder mystery, with a trench coat–wearing detective interviewing the maid, butler and lady of the house over the death of Lord Smithe, who lies sprawled on the drawing room floor. But the sketch is merely the premise for a test designed to show just how bad we are at noticing things that we're not looking for – including on the roads. After the detective names the killer the scene is replayed, this time filmed from a camera that captures all the film crew's out-of-shot manoeuvrings. This angle reveals that the 50 second scene contained 21 glaring continuity errors; paintings, props and rugs were all switched half way through the shoot, and even the actor playing Lord Smithie's corpse was replaced.

Envato Posted by Briany Kalms on 07 March 2014 01:08 AM Hi Everyone, You've probably noticed that we had a small outage today between 6:30AM and 7:00AM AEST. As a result it may have looked as though transactions such as purchases and deposits and even some posts didn't go through. We didn't actually loose any data but it was written to a secodary database instead of our primary one. More detailed information on what happened can be viewed in this forum post.

11 free & inexpensive online photo editing tools 10inShare Photo courtesy of Fensterbme via Creative Commons Photoshop Express, Pixlr, FotoFlexer allow editing on a budget Target audience: Nonprofits, NGOs, cause organizations, social enterprises, businesses, Web publishers, bloggers, social media managers, individuals. By Lindsay OberstSocialbrite staff Vertical Timeline A responsive vertical timeline layout with icons and example media queries. View demo Download source This is a simple responsive timeline with alternating colors for the labels. An icon font is used for the icons in the timeline waypoints and some example media queries show how to adjust the timeline for smaller screens. The main structure of the timeline is an unordered list. The HTML

Business to a Different Beat It’s easy to get tangled up inside a painting while creating it. To lose perspective and overdo until the power of the expression is dulled or killed. When I was in my teens, I discovered a way to tell if a painting or drawing worked or not, it if were finished or not. I hold my drawings and paintings up to the mirror. About - autotracer.org What does Autotracer mean? You can use this Autotracer to convert raster images into vector graphics. This process is called tracing or vectorization.

The 17th Surgery Seconds later, seemingly out of nowhere, Noah was next to her. He was crying and covered in ash — but he was okay. Pete’s aunt, who’d been standing near them during the explosion, had picked him up and brought him over to Rebekah. “I thought it was a sign,” she says. ”I thought, ‘He’s here, he’s okay. And now I really am going to die.’” Friend In Palm(Assistant SIRI) - Aplikacje Android w Google Play Executive Assistant (EA) provides an all-in-one interface for quickly reviewing your: + Email: any combination of GMail, Google Apps, or POP/IMAP accounts. Exchange too if you use a supported email client. See below for a list of supported clients. + Text messages: both native and Google Voice, including pop-up and reply options+ Missed calls: return calls directly from the app+ Calendar events (including Exchange & Facebook if supported by your phone)+ Tasks: Astrid, DGT GTD (w/Pure Widget plugin), Google Tasks Organizer, Got To Do, GTasks by Dato, ToDo Task Manager, or TouchDown+ Feedly RSS feeds+ Twitter timeline+ Facebook news

9 Superb Web-Based Image Editors And Illustrators I’m sure we’ve all wanted to use image editing software at some point or another, and the two programs that come to mind are Photoshop and Gimp. While they are both phenomenal pieces of image editing software, they can sometimes prove inconvenient or (in the case of Photoshop) too expensive. You can easily overcome these issues by making use of a web app that has almost all the features you would want along with unique cloud storage capabilities. In this post, I want to share with you nine great web-based image editing applications that I have discovered in my quest to find a viable graphic creation and manipulation program. I consider Sumo Paint to be the cream of the crop. Not only is it bursting with features, but it has a clean and intuitive interface.

About Us When brothers Brian Williams and Andy Rankin joined their dad, Wynne “Pop” Williams, to establish Viget Labs in 1999, the Internet was changing everything. They wanted to help lead the charge by creating a new kind of services company where: innovation is the norm; quality is valued over growth; clients are respected (and are expected to reciprocate); integrity and authenticity are required; hard work and commitment are rewarded; measurable results matter most; and staffers feel like family (and they actually love coming to work). So, they did. We’re proud of what we’ve accomplished. Hundreds of happy clients, an exceptional team of 65 in 3 great locations, and more than a dozen years of good old fashioned profitability (some years leaner than others).

Android 4.3, Jelly Bean ‹ Return to highlights Android 4.3, an even sweeter Jelly Bean, is available now on Nexus phones and tablets. Restricted profiles limit access to apps and content, at home with your family and at work. Convert image to EPS Online image converter With this tool you can convert almost any image to the EPS format. Change settings in the digital filter section to apply changes to your images when needed. This converter converts to the Adobe Encapsulated PostScript (EPS) format. You can choose from one of the following input formats: