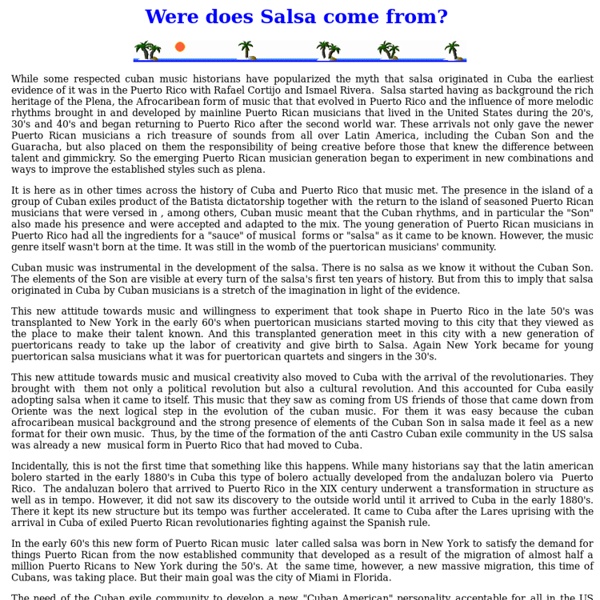 While some respected cuban music historians have popularized the myth that salsa originated in Cuba the earliest evidence of it was in the Puerto Rico with Rafael Cortijo and Ismael Rivera. Salsa started having as background the rich heritage of the Plena, the Afrocaribean form of music that that evolved in Puerto Rico and the influence of more melodic rhythms brought in and developed by mainline Puerto Rican musicians that lived in the United States during the 20's, 30's and 40's and began returning to Puerto Rico after the second world war. These arrivals not only gave the newer Puerto Rican musicians a rich treasure of sounds from all over Latin America, including the Cuban Son and the Guaracha, but also placed on them the responsibility of being creative before those that knew the difference between talent and gimmickry. It is here as in other times across the history of Cuba and Puerto Rico that music met. Cuban music was instrumental in the development of the salsa. Related:  Salsa

Salsa History of Salsa Dancing Salsa is not easily defined. What is Salsa? A sauce, a recipe, a dance? Who invented salsa? Salsa is a distillation of many Latin and Afro-Caribbean dances. Salsa is similar to Mambo in that both have a pattern of six steps danced over eight counts of music. In Salsa, turns have become an important feature, so the overall look and feel are quite different form those of Mambo. Written by: Jaime Andrés Pretell It is not only Cuban; nevertheless we must give credit to Cuba for the origin and ancestry of creation. This syncretism also occurred in smaller degrees and with variations in other countries like the Dominican Republic, Colombia, Puerto Rico, among others. New York created the term "Salsa", but it did not create the dance. If you are listening to today's Salsa, you are going to find the base of són, and you are going to hear Cumbia, and you are going to hear Guaracha. This is called "finishing", to enter the local market. None is better, only different. Highlights by FRANK M.

Salsa History - The history of salsa dancing and salsa music There is a lot to write about salsa history, but don't worry, we will keep it short and simple. Salsa is the result of a musical evolution of various types of Latin rhythms. Salsa is also a dance style which combines many different cultural genres. Salsa Music History Salsa music and salsa dancing are very much connected because the main purpose of the music is to dance to. The origin of salsa There exist an ongoing discussion on the exact origin of salsa. Salsa Dance History The term "Salsa" was created in New York. The term refers to a variety of Hispanic musical styles: Rhumba, Són Montuno, Guaracha, Mambo, Cha cha cha, Danzón, Són, Guguanco, Cubop, Guajira, Charanga, Cumbia, Plena, Bomba, Festejo, Merengue, among others. Many of these have maintained their individuality and others were mixed creating "Salsa". Celia Cruz From 'Salsa History' back to 'Homepage'.

Salsa Instruments Salsa Instruments and the Salsa Band Since the advent of Rock'n'Roll, western pop bands have increasingly experimented with reducing the number of band members. Some top rock bands have counted as few as three musicians. Latin music has followed the opposite trend. What Instruments Are Used in Salsa Music The instruments used in salsa music vary depending upon the specific genre and the geographic influence, but the basic salsa setup demands a brass section, piano and a rhythm section. From these elements musicians create a singular sound representing a fusion of African and Spanish traditions. The key to salsa instrumentation is the beat, so percussion instruments are diverse and often numerous. Types A salsa orchestra typically features the same instruments as in a jazz band: baritone, tenor and alto saxophones; a trumpet section; a trombone section; piano; an electric or upright bass; and the percussion section, which may feature conga drums, bongos, claves, cowbells, cascaras, cymbals and timbales. Geography Salsa has lit up the globe. Features One sees the strongest elements of salsa music's African influence in the types of drums musicians play. Considerations Salsa is an umbrella term for various Latin Caribbean and Cuban musical forms. Expert Insight Related Searches Promoted By Zergnet