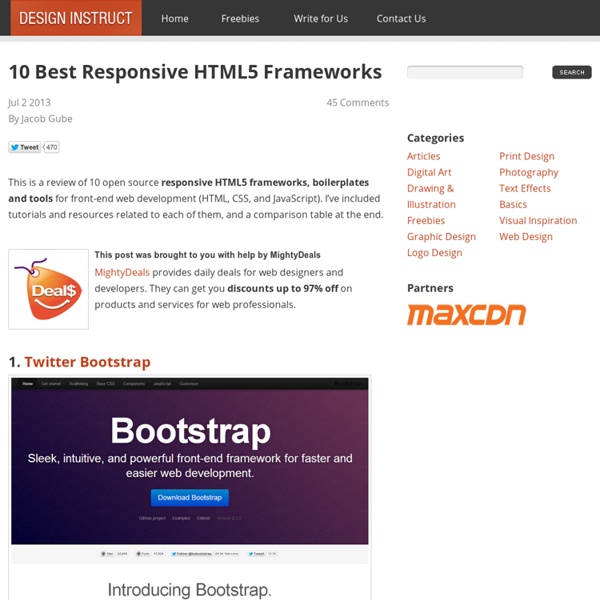 This is a review of 10 open source responsive HTML5 frameworks, boilerplates and tools for front-end web development (HTML, CSS, and JavaScript). I’ve included tutorials and resources related to each of them, and a comparison table at the end. 1. Twitter Bootstrap Bootstrap is a popular, modern front-end/UI development framework. It’s feature-packed and will have most of the things you’ll need for developing responsive sites and apps. Bootstrap has a 12-grid responsive layout, 13 custom jQuery plugins for common UIs like carousels and modal windows, a Bootstrap customizer, and more. Bootstrap is well-documented, and this open source project has plenty of coverage in blogs and tutorial sites. Bootstrap Tutorials Bootstrap Tools and Resources 2. Foundation is another popular responsive front-end framework. It has rapid-prototyping capabilities, a responsive grid system and much more. Foundation is by ZURB, a company of product designers focused on providing web-based solutions. 3. 4. 5. 6. 7. 8.

Less Framework 4 I called Less Framework "a CSS grid system for designing adaptive websites". It was basically a fixed-width grid that adapted to a couple of then popular screen widths by shedding some of its columns. It also had matching typographic presets to go with it, built with a modular scale based on the golden ratio. The resources it was originally published with are still available on GitHub. Contrary to how most CSS frameworks work, Less Framework simply provided a set of code comments and visual templates, instead of having predefined classes to control the layout with. /* Default Layout: 992px. Less Framework was popular in the early days of responsive design. Eventually, I moved on from fixed-width grid systems and worked on a fully fluid-width one, in the form of Golden Grid System. Less Framework's popularity was helped by the following contributions and the lovely people behind them (dead links crossed off):

6 Great Responsive Frameworks for 2014 | Gridgum Responsive websites also allow the website to smoothly scale to a wide range of different sized devices without the need for an additional mobile/device specific site and these responsive frameworks help speed up the process. So lets get started with our list, please note this is not in order of popularity or favouritism. 1. Gumby is a responsive CSS framework that’s built with Compass and SASS. 2. Foundation is a lightweight front-end framework from ZURB, this framework enables the user to create complicated layouts without the need to create a large number of custom elements. 3. Skeleton is a small responsive framework designed for the rapid development of websites of any size. 4. The Responsive Grid System claims not to be a framework, or a boilerplate, but a ‘quick, easy & flexible way to create a responsive website’. 5. 6. And last and not least, Bootstrap.

Will HTML5 Kill the Native App? Mobile Computing | Feature Will HTML5 Kill the Native App? As schools calculate the best way to serve students via mobile apps, cost and performance are part of the equation. Does HTML5 offer a solution or is it just another variable? For colleges and universities today, the question is no longer whether to develop a campus app or not. That horse left the barn in 2012, and BYOD is now galloping freely. HTML5 is the dark horse. Whether this souped-up version of HTML will have enough bells and whistles to supplant native apps is the big question, but schools will probably base their decisions on three factors: performance goals, development costs, and maintenance expenses. The Costs Developing applications for multiple platforms is expensive, primarily because it takes developers a lot of time to create two or three versions of a single app.

Responsive Design Frameworks: Just Because You Can, Should You? Advertisement Responsive design is about building a website with a grid-based layout, images that resize and media queries, as described by Ethan Marcotte. After Marcotte defined the technique, responsive design frameworks began to emerge that incorporated these principles. Mostly based on CSS and JavaScript, many of these frameworks are open-source, free to download and quickly customizable. Some of the most popular today are Bootstrap1 and Foundation2, which we’ll focus on in this article. As responsive design frameworks became popular, a big debate emerged: Why would a professional designer use a responsive design framework? Internet debates rage on3. A designer could write their own grid system, and they probably should if they know any HTML and CSS.Websites based on frameworks load slowly.All websites based on frameworks look the same.Bloat is common, whether due to the extra div tags, the 5000+ lines of CSS or the large JavaScript files. A Place For Responsive Design Frameworks

Bootstrap · The world's most popular mobile-first and responsive front-end framework. Responsive CSS Framework Comparison: Bootstrap, Foundation, Skeleton Bootstrap 4.0.0-alpha is a fairly large update to the framework. It has dropped Less support in favor of Sass, converted from px-based to rem-based sizing, improved its grid system, and dropped IE8 support. Also, all its JS plugins were re-written in ES6, it now uses a customized reset CSS file called Reboot, and offers flexbox support via a Sass boolean variable. In addition to this update, Bootstrap now offers themes at themes.getbootstrap.com. Also, Bootstrap will continue supporting version 3, unlike the dropping of version 2 support after the release of version 3. You can read more here. Foundation 6 is a fairly major update which includes more grid flexibility, custom breakpoints, optional flexbox, and more. Like Bootstrap 4, Flexbox is now toggleable via Sass in Foundation 6. The Sass/CSS has been reworked and consolidated, and there are fewer default styles to override on common elements. Skeleton 2 was updated in December 2014 after remaining mostly unchanged for about three years.

What are Frameworks? 22 Best Responsive CSS Frameworks for Web Design This post aims to present what frameworks are and what they are used for, alongside a selection of the best that can be got for free on the internet. In this way, we want to help web designers and developers who are starting out to discover new resources and possibilities, as well as setting out concepts that can sometimes be too abstract for those who have already travelled far in the world of web design. What is a framework? A framework is a standardized set of concepts, practices and criteria for dealing with a common type of problem, which can be used as a reference to help us approach and resolve new problems of a similar nature. In the world of web design, to give a more straightforward definition, a framework is defined as a package made up of a structure of files and folders of standardized code (HTML, CSS, JS documents etc.) which can be used to support the development of websites, as a basis to start building a site. To summarize: there’s no need to reinvent the wheel. 1.