StudyDroid: FlashCards on the web, and in your hand! 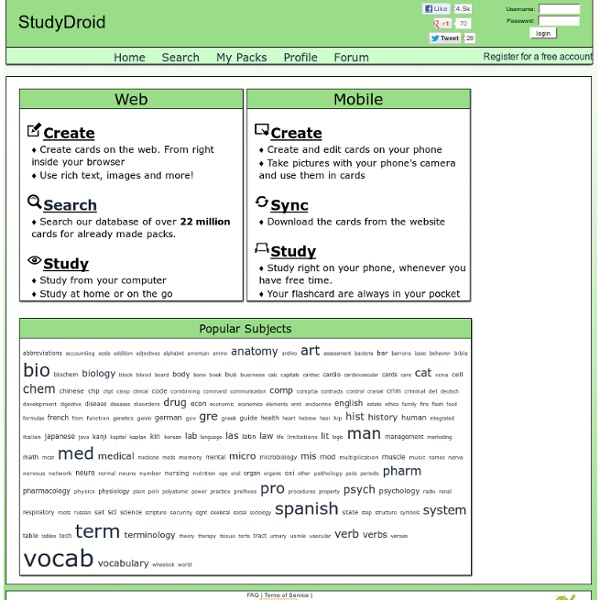 Download Free ESL Flashcards and Printables Dictionary.com Flashcards Master the 1000 most important GRE words with the highest-rated free flashcards for your Android phone. Practice every day to improve your vocab knowledge. Study to rectify your benightedness and prepare to trounce the GRE verbal section! ☞ 1000 vocab words picked by an expert GRE tutor☞ Definitions and example sentences for every word☞ Decks for every difficulty level☞ Track your progress as you study☞ Smart algorithm focuses your practice for efficient learning This app gives you free access to all of Magoosh’s GRE flash cards. Written by GRE expertsThe entire GRE wordlist is selected and defined with usage examples by Magoosh’s expert GRE tutors, led by Chris Lele. Review that really sticksAcademic research has found that memories are formed by repeated exposure to new information, so Magoosh’s flashcard app uses a spaced repetition system. “I really like the way the words appear and the simple interface to show progress of the user. Have any questions?

Graphic arts Graphic artists at work during the 1960s A type of fine art, graphic art covers a broad range of art forms. Graphic art typically is two-dimensional and includes calligraphy, photography, drawing, painting, printmaking, lithography, typography, serigraphy (silk-screen printing), computer graphics, and bindery. Graphic art also consists of drawn plans and layouts for interior and architectural designs.[1] The responsibility for effective communication also falls under the auspices of the graphic designer. History[edit] Throughout history, technological inventions have shaped the development of graphic art. Johannes Gutenberg invented an improved movable type mechanical device known as the printing press in 1450, the first outside of Asia. Again during the Renaissance years, graphic art in the form of printing played a major role in the spread of classical learning in Europe. The next major change in graphic arts came when the personal computer was invented in the twentieth century.

ImageQuiz Printable Flash Cards for Vocabulary Words-with Photographs Sluggish Sluggish audio/easy/sluggish.mp3 adjective lacking energy; inactive Our cat is sluggish during the day. sluggish.jpg Gush Gush audio/easy/gush.mp3 verb to flow out forcefully, often in large amounts Water gushed down the waterfall. gush.jpg Predicament Predicament audio/easy/predicament.mp3 noun a difficult situation The animal was left in a predicament. predicament.jpg Weary Weary physically or mentally exhausted The programmer was so weary that he fell asleep on the job. weary.jpg Ruffle Ruffle audio/easy/ruffle.mp3 to raise (feathers) The macaw ruffled its feathers. ruffle.jpg Expedition Expedition audio/easy/expedition.mp3 a journey or voyage made for a specific purpose The scientists made an expedition to Alaska to study wildlife. expedition.jpg Wrath Wrath fierce anger I was the victim of his wrath. wrath.jpg Grove Grove audio/easy/grove.mp3 a group of trees without undergrowth We came across a small grove. grove.jpg Hulking Hulking audio/easy/hulking.mp3 so large as to appear clumsy A hulking rhino stood before me. Immerse

Finding Alternative Sources Of Typographic Layout In Our Surroundings - Smashing Magazine Advertisement Studying art and design usually starts with a deep exploration of elements and principles. Among these elements, the most basic ones — line, point and plane — usually figure in a work of art or design. The Framework Of Sources For Typographic Layout According to Wucius Wong in his book Principles of Form and Design (page 42), point, line and plane can be considered conceptual design elements because, although they are not always explicit or visible, they seem to be present by implication. In most art and design classes, students are asked to analyze the structure of a painting or design in order to better understand principles of organization. Learning To Abstract What We See Most of us live in a relatively static environment, whether urban or rural. (Photo courtesy of the Urban Studies Department, Wheaton College, Wheaton, Illinois.) Here we have a worm’s-eye view of buildings. Linear abstraction. Here, the city escape photo has been abstracted to simple lines. Conclusion (al)

How Iconic: A Word Is Worth Thousands Of Pictures : All Tech Considered Picture a dictionary that doesn't need words to get the point across. It started after Edward Boatman read the book The Professor and the Madman by Simon Winchester. The book is about Professor James Murray, the man who compiled the first Oxford English Dictionary. So Boatman thought he'd do something similar: use crowdsourcing to gather an army of people to define words, but instead of using other words to do it, they'd use icons. Thus the Noun Project was born. "The thinking behind this is that visuals are kind of the one language that everyone can understand regardless of race or ethnicity or cultural heritage," Boatman said. The Noun Project is an online database of nearly every noun you can imagine, as well as some verbs. Need an image of a drone delivering pizza or feeding a baby? The project isn't just Boatman's vision for sharing a visual language, it's also a business. Teespring, a company that allows users to design their own T-shirts, also uses the API.

Online Flashcards with Spaced Repetition: FlashcardDB Headmagnet | Get stuff in your head and keep it there! Public Domain Clip Art Reading Stations Here are some ideas to creating readings stations for your foreign language students. Be sure to read the previous post on Readings Activities. Station 1: Photos In this station, students will arrange photos chronologically according to the text. Station 2: Sentences In this station, students will arrange sentences chronologically according to the text. Station 3: Match Photos with Vocabulary Students will have a number of words from the story (familiar and new) as well as a picture representation of each word. Station 4: Bingo in a Bag Students take a blank bingo card and fill in words that you give them.Students take a question (about the text) out of a bag and mark the answer on their bingo card.When a student gets 4 in a row, the teacher verifies and the student moves on. Station 5: Drawing Students use pencils, markers, or crayons to draw a storyboard for the story Station 6: Writing Given a choice, students will compose a written piece. Like this: Like Loading...

AR Flashcards Space Blogs, Articles and Videos from the World's Top Thinkers and Leaders A small startup company called Extrality is working on augmented reality flashcards for phonics. They’re calling them SmashCards. The idea is to embed interactivity into what look like ordinary flashcards, thus (hopefully) enhancing children’s phonemic awareness and understanding. When a SmashCard is held up to a webcam, relevant graphics or videos can pop up on the computer screen (e.g., the T and the EA are fluttering butterflies): The system also can tell when SmashCards are combined and can even determine what order they’re in. For example, T + EA shows a person with a cup of tea, while EA + T shows a video of someone eating. Here’s a video that further explains the concept. More information about the project is available at the SmashCards web site. I think it’s an interesting concept. What do you think?