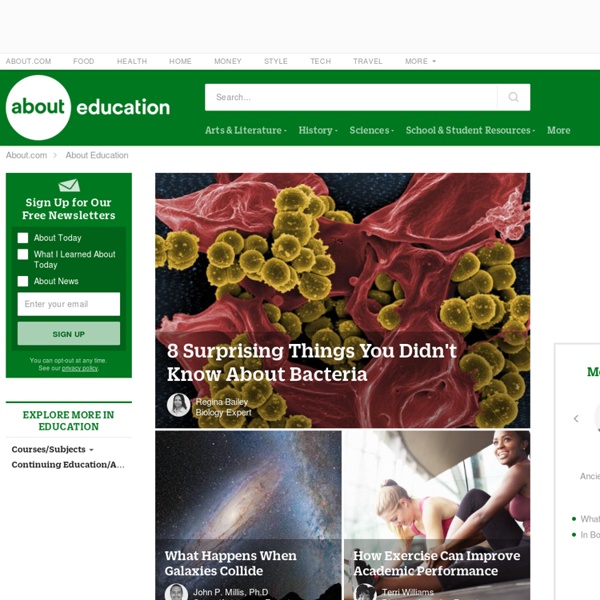 Deb is an experienced school principal and math teacher, having taught on the elementary, middle and high school level. As an educator, parent and math enthusiast, she is committed to providing readers with the best mathematical resources and problem solving strategies. More Gerald is a journalist and editor who has been writing Spanish lessons for the past 15 years. He started studying Spanish in high school and loves sharing his knowledge of the fascinating language, one rich in culture and history, with new learners. More

Academic Evolution: Scholar or Public Intellectual? After listening to Henry Jenkins and a few others speaking about public intellectualism lately, I have felt a sense of civic duty coming over me, something that links participating in democracy with the participatory media of Web 2.0. How obvious, how appropriate, that we share our best thinking with the world at large; how simple it is to do this, now, through blogs and online media. Here's the problem: I'm a scholar. A scholar is not a public intellectual; a scholar is a private intellectual. We who are trained in a discipline speak to our peers in that discipline, and the response of that extremely small brotherhood determines tenure, promotion, and the various perquisites of academia. We are conditioned through all our training that what we have to say only matters if it matters only to very small, very private audiences.

NOVA Can Wind Turbines Make You Sick? Residents living in the shadows of wind turbines say the sound is making them sick. But so far the science isn't there. From NOVA Next | Jun 27, 2018 Cultural Differences in Business Working abroad? Join InterNations to meet other expats where you live and read more articles like Cultural Differences in Business with relevant information for expats. Working Abroad All of us global minds have been confronted with cultural differences at some point.

A New Pedagogy is Emerging...And Online Learning is a Key Contributing Factor In all the discussion about learning management systems, open educational resources (OERs), massive open online courses (MOOCs), and the benefits and challenges of online learning, perhaps the most important issues concern how technology is changing the way we teach and - more importantly - the way students learn. For want of a better term, we call this “pedagogy.” What is clear is that major changes in the way we teach post-secondary students are being triggered by online learning and the new technologies that increase flexibility in, and access to, post-secondary education. In looking at what these pedagogical changes are and their implications for students, faculty, staff, and institutions, we consider: What drives the development of this new pedagogy?

The Difference between Aliens, Demons and Fallen Angels The Difference Between Fallen Angels, Demons, Aliens, Jedi, and the Watchers By Sherry Shriner In these last days, the Bible says it will be a time of mass hybridization and the mixture and corruption of human DNA by fallen angels, also known as "Aliens." The government is and has been, conditioning the existence of aliens through Hollywood, science fiction, cartoons, and other sources. Email English Worksheets Get more out of teaching with Email English with these free downloadable resources. In these website activities you will find free writing practice for most Email English units. You can print out the page for the unit you are working on and give it directly to the students. No additional preparation will be necessary.

At Educause, a discussion about OER DENVER — MOOCs are on the tip of everyone’s tongue here at the annual Educause meeting, presumably because of their scale and the technologies their recent champions have built to support that scale. But in his opening keynote, Clay Shirky, an author and assistant professor at New York University, said the most provocative aspect of MOOCs is not their massiveness; it is their openness. Or, in some cases, their lack thereof. Shirky’s framing of MOOCs as a phenomenon of the open educational resources (OER) movement -- rather than of the online education or instructional technology movements -- comes shortly after Coursera struck a content licensing deal with Antioch University that drew a line on the extent to which the company would allow outsiders to use its resources without paying to do so. The missing piece is a caveat in Coursera’s terms of service that prohibits the use of Coursera’s MOOCs for anything but informal education. So are MOOCs, and the content packaged therein, OER?

Simon Peter versus Simon the Sorcerer This is a great expose by the late Dr. E.L. Martin. It documents the true history of the Samaritans, the meaning of the word "peter" in the ancient world and the "church" that was established at Rome by Simon the Sorcerer. "But there was a certain man, called Simon, which beforetime in the same city used sorcery, and bewitched the people of Samaria, giving out that himself was some great one: To whom they all gave heed, from the least to the greatest, saying, This man is the great power of God. And to him they had regard, because that of long time he had bewitched them with sorceries.

Pedagogy and Space: Empirical Research on New Learning Environments (EDUCAUSE Quarterly Key Takeaways In the new technology-enhanced learning spaces at the University of Minnesota, students outperformed final grade expectations relative to their ACT scores. When instructors adapted their pedagogical approach to the new space by intentionally incorporating more active, student-centered teaching techniques, student learning improved. Students and faculty had positive perceptions of the new learning environments but also had to adjust to the unusual classrooms. In a previous EDUCAUSE Quarterly article,1 we reported the results of quasi-experimental research on the University of Minnesota's new, technology-enhanced learning spaces called Active Learning Classrooms (ALCs).