Google Reader Is Shutting Down; Here Are the Best Alternatives 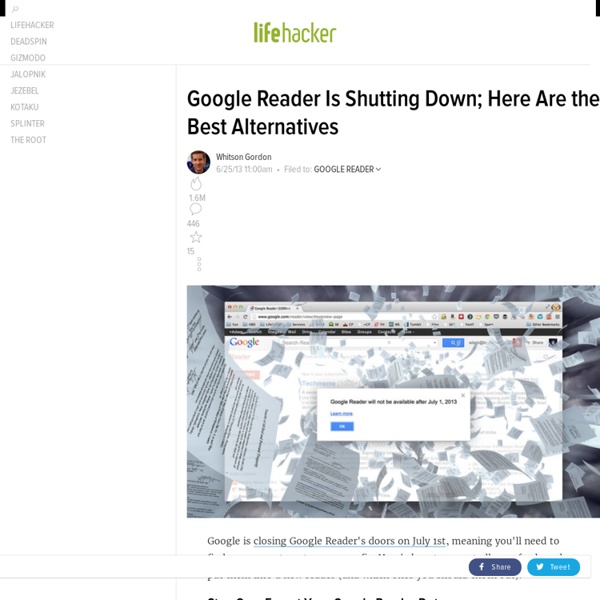 As Google Reader is Axed, its Dependents Step Up So Google is axing Google Reader. While the product has a diminishing but fiercely loyal user base (which includes me and other TNW staffers), a number of related RSS services relied on the Reader API code to do their thing. That means the shutdown could affect a wider selection of Internet users, and a number of services are working on get-arounds to scoop up those left disappointed. Feedly — a browser plug-in that turns feed into magazine-like layouts — has detailed its project to clone to Google Reader API, popular social aggregator Flipboard says its “got your RSS feeds covered”, open-source Newsblur is adding more servers to cope with Reader imports, while Reeder — another Google dependent – “won’t die with Google Reader”. Doubtless there are others scrambling to be heard — and survive — following the news from Google. Instapaper creator Marco Arment has an interesting take on the subject. Update: Now you can even petition the White House – here. Headline image via brittgow / Flickr

Google Reader is dying, but we have five worthy alternatives | iPhone Atlas Editors' note: This post has been updated with new and better alternatives to fit your news-reading style. Hear that? That's the sound of millions of news junkies on the Web scrambling to find an alternative to Google Reader. As you may have heard, Google Reader will be no more starting July 1. With that in mind, we've put together a list of what we think are the best replacements for the soon-to-be-late Google Reader. An ideal RSS reader should be available on desktop computers and as native mobile apps for both iOS and Android. With that said, if you're the visual type, there are also options that read more like a magazine. And if you're looking for a solely browser-based RSS reader, CNET's Seth Rosenblatt has put together a nice roundup of standalone desktop software for your RSS reading pleasure on both Windows and Mac. Your best bet Feedly (Web | iOS | Android) Hands down, Feedly is one of the best RSS readers on the market. Overall, Feedly is one of the best RSS readers out there.

Poll Technica: Where should we go when Google Reader is put out to pasture? Google's latest "spring cleaning" may be the company's most heartbreaking since Google Wave. Google Reader, the RSS reader of the masses, will shut down on July 1. A surprising number of Ars staffers still use Google Reader, so the conversation in the Orbital HQ immediately turned to alternatives. "Oh, what about FeedDemon?" Errr, the service depends on Google Reader. "What about Reeder for iOS?" Twitter quickly became a suggestion box. But when in doubt, Ars can always do what others can't—turn to our collective reader braintrust.

Google Reader is Dead. Here’s What You Need to Replace it. I woke up this morning, grabbed my iPhone to check the news in Reeder — which is powered by my Google Reader account — only to find at the very top that Google is shutting down Google Reader, for good, on July 1, 2013. They said it’s because too few people use it, which is rather ironic since most of us heard the news via articles synced in Google Reader. Of course, it’s been a rumor for some time that Google Reader might be the next Google service to hit the chopping block, but it’s not just a rumor this time. Rather, is the first thing the Google Reader team has posted on their blog since 2011. That’s terrible news, since most RSS apps for desktops and phones are powered by Google Reader, and Google’s service was so popular that it practically pushed all alternatives out of the market. So what do you do? First Things First: Export Your Google Reader Subscriptions Export your Google Reader subscriptions Use Pinboard to Save Your Starred and Shared Articles Now, Get a New RSS Reader App

RSS isn't dead: the best Google Reader alternatives 75inShare Jump To Close When I heard Google was planning to kill Google Reader on July 1st as part of a “spring cleaning exercise,” I was appalled. Google had decided to disband the team of paperboys that delivered me the news every morning. And Google Reader is a lot more than an RSS client. “Hearing that Google Reader is shutting down is like hearing that your favorite old bookstore is closing,” writes The New Yorker’s Joshua Rothman. This post was updated on June 28th, 2013 with new information and products. Sticky TOC engaged! Saying goodbye Saying goodbye A quick primer on moving to a new service Switching from Google Reader to another service isn't much of a pain, assuming you pick one of the newer options like Feedly or Digg. Otherwise, you'll have to export your Google Reader account, then import it (as an OPML or XML file) into your service of choice. Google will allow you to export your feeds using Takeout until July 15th, so make a move. Feedly Feedly The best overall reader Newsblur

The Feed Reader Reviews: Newsblur Introduction Google Reader is essentially dead. Its passed on. This reader is no more. It has ceased to be. I'll miss the syncing service, but I was never really thrilled with the interface so it's a minor loss. Rather than throw out a bunch of alternatives that I've never used more than five minutes, I'll give you my opinions from the ground up. Newsblur Newsblur has been around for awhile but, like all RSS readers, received a huge influx of new users over the past two months. Before I get into the review and tutorial, let's get this out front. Getting Started Newsblur offers direct import from a Google account. Newsblur can also import from an OPML file. But here's where Newsblur already starts to impress. The Reading Experience Newsblur presents a similar yet more effective design than Google Reader or Fever. The main feed list may be toggled between two different modes, a simple List View and a Split View. I also turned on the option to show unread counts on the feed groups. The Apps iPad

I agree, why does RSS still feel so janky after so long? It's about due for a shift to better usability - including better sharing to apps like evernote and onenote, and some intuitive way of tagging wouldn't hurt. by joshwanderingoff Apr 18

There has to come more powerfull applications. by schenz Mar 21