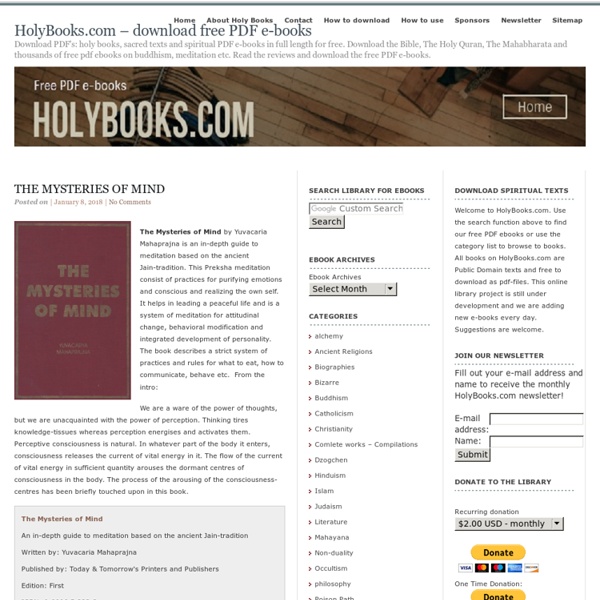 Posted on | April 24, 2014 | No Comments The Hasheesh Eater with the subtitle: Being the Passage from the Life of a Pythagorean is a classic in psychedelic literature. It was publishes in 1857 by the author Fitz Hugh Ludlow and it became at huge success. At that time cannabis was both a legal and widely unknown substance. This book led to a public interest in psychedelics and even to the first ventures into modern commercial medical marijuana. Fitz Hugh Ludlow writes on his own personal experiences with the drug, which he ingested orally in huge doses.

irmakdonmez Paintings Drawings Manipulations & Photos Studio Sacred Magic of Abramelin Index Sacred Texts Grimoires Esoteric This remarkable grimoire was translated by S.L.M. Mathers from a 15th century French mauscript. This text has had a huge influence on modern ceremonial magic, and has been cited as a primary influence on Aleister Crowley. Abraham of Würzburg, a cabalist and scholar of magic, describes a quest for the secret teachings which culminated in Egypt, where he encountered the magician Abramelin, who taught him his system in detail. The procedure involves many months of purification, followed by the invocation of good and evil spirits to accomplish some very worldly goals, including acquisition of treasure and love, travel through the air and under water, and raising armies out of thin air.

24 Books You’ve Probably Never Heard Of But Will Change Your Life Here’s the problem with reading the books that everyone else has read. It makes you more like everyone else. Checking off the various books from your high school curriculum, and then, perhaps the “100 Greatest Books Ever Written” is the educational equivalent of skating to where the puck is and not where it’s going. Reading is about insight into the human experience, about understanding. What does following in the footsteps of everyone else get you?

The Law of One, Harvest Version (?): Lightly Edited, Relistened, Original Hide question numbers Show categories Show notes Hide ads 1.9 Questioner: Can you say anything about the coming planetary changes? [Background noise.] The Ancient Chinese Libertarian Tradition - Murray N. Rothbard The first libertarian intellectual was Lao-tzu, the founder of Taoism. Little is known about his life, but apparently he was a personal acquaintance of Confucius in the late sixth century BC and like the latter came from the state of Sung and was descended from the lower aristocracy of the Yin dynasty. Unlike the notable apologist for the rule of philosopher-bureaucrats, however, Lao-tzu developed a radical libertarian creed. For Lao-tzu the individual and his happiness was the key unit and goal of society. If social institutions hampered the individual's flowering and his happiness, then those institutions should be reduced or abolished altogether.

Hattie Watson +The Reclaimed Do you like woods, industrial furniture and houses, camping, rustic outdoors, etc.? Come follow our blog. We will post beautiful imagery as well as updates on our products. Our goal is to inspire and create. jonathanstaufer said: The new shot of you by Creative Rehab, is magnificent - so emotive.

Violette Leduc Violette Leduc (7 April 1907 – 28 May 1972) was a French author. Biography[edit] Her formal education, begun in 1913, was interrupted by World War I. After the war, she went to a boarding school, the Collège de Douai, where she experienced lesbian affairs with a classmate and a music instructor who was fired over the incident.[1] In 1942 she met Maurice Sachs and Simone de Beauvoir, who encouraged her to write. Her first novel L'Asphyxie (In the Prison of Her Skin) was published by Albert Camus for Éditions Gallimard and earned her praise from Jean-Paul Sartre, Jean Cocteau and Jean Genet.

Masonic E-Book Library Note: Many of the e-books in this library are several hundred pages long and include illustrations. It takes a minimum of a high-speed DSL or cable modem to download many of them. i.e. Mackey's Masonry Defined takes 3 minutes just to download the text. A Message from our Librarian Max Heindel - Rosicrucian Mysteries_An Elementary Exposition of their Secret Teachings Bibliography of the Writings and Works of Albert Pike

Ancient_wisdom.html Come, put your mundane concerns aside for awhile and cross the threshold to explore the Wisdom of the Ages. Click on above banner for catalog and order information This site is an ongoing project which will be updated regularly-- Kalanlar Lou Reed dies at age 71. Rest In Peace… Teach The Gifted Children Lou Reed 1980 Teach the gifted children Teach them to have mercy Teach them about sunsets Teach them about moonrise Teach them about anger The sin that comes with dawning Teach them about flowers And the beauty of forgetfulness Then take me to the river And put me in the water Bless them and forgive them Father cause they just don’t know

William James William James (January 11, 1842 – August 26, 1910) was an American philosopher and psychologist who was also trained as a physician. The first educator to offer a psychology course in the United States,[2] James was one of the leading thinkers of the late nineteenth century and is believed by many to be one of the most influential philosophers the United States has ever produced, while others have labelled him the "Father of American psychology".[3][4][5] Along with Charles Sanders Peirce and John Dewey, he is considered to be one of the greatest figures associated with the philosophical school known as pragmatism, and is also cited as one of the founders of functional psychology. He also developed the philosophical perspective known as radical empiricism. James' work has influenced intellectuals such as Émile Durkheim, W. E. B.