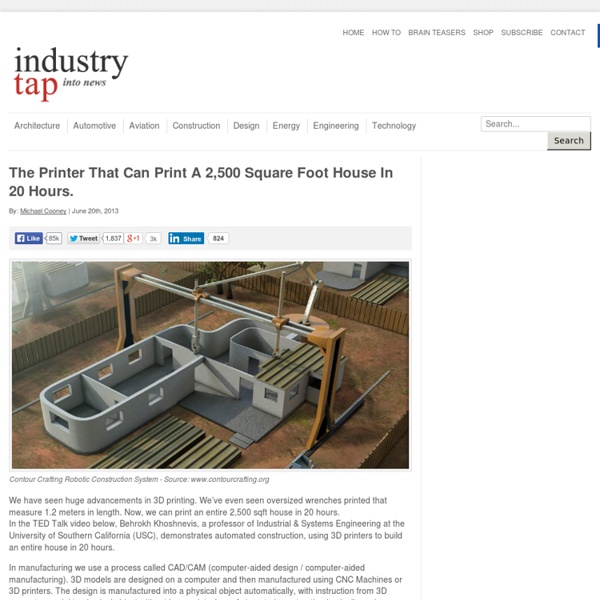 We have seen huge advancements in 3D printing. We’ve even seen oversized wrenches printed that measure 1.2 meters in length. Now, we can print an entire 2,500 sqft house in 20 hours. In the TED Talk video below, Behrokh Khoshnevis, a professor of Industrial & Systems Engineering at the University of Southern California (USC), demonstrates automated construction, using 3D printers to build an entire house in 20 hours. In manufacturing we use a process called CAD/CAM (computer-aided design / computer-aided manufacturing). 3D models are designed on a computer and then manufactured using CNC Machines or 3D printers. The design is manufactured into a physical object automatically, with instruction from 3D computer model to physical object without human interface. In this video, we see a prototype of a machine called ‘Contour Crafting’ Michael Cooney Michael Cooney, the founder of EngNet, worked as a project engineer for many years sourcing equipment.

My Region - 3-D printer by Sask. man gets record crowdsourced cash A Saskatchewan man who has developed an affordable 3D printer has attracted worldwide attention and more than $700,000 in crowdsourced funding. Rylan Grayston, 28, from Yorkton, said curiosity fuelled his quest to create a 3D copier that sells for just $100. Other high-tech 3D printers sell for several thousand dollars or more. "I didn't have enough money for a 3D printer that I wanted, so I just started thinking about how can I do this myself?" Nanoscribe Will Sell a Micro 3-D Printer That Creates Tiny Structures in Seconds Nanoscribe, a spin-off from the Karlsruhe Institute of Technology in Germany, has developed a tabletop 3-D microprinter that can create complicated microstructures 100 times faster than is possible today. “If something took one hour to make, it now takes less than one minute,” says Michael Thiel, chief scientific officer at Nanoscribe. While 3-D printing of toys, iPhone covers, and jewelry continues to grab headlines (see “The Difference Between Makers and Manufacturers”), much of 3-D printing’s impact could be at a much smaller scale. Micrometer-scale printing has shown promise for making medical and electronic devices. Thiel says it should be possible to speed up his company’s microprinting technique even more in the future.

ICC: Support Justice, Reject Immunity Member countries of the International Criminal Court (ICC) should reject efforts to provide immunity from prosecution to sitting government leaders, Human Rights Watch said today. The court’s 122 member countries are expected to take part in the annual session of the Assembly of States Parties, which begins on November 20, 2013, in The Hague. At the request of the African Union (AU), a special segment of the meeting will discuss the indictment of heads of state in office and its impact on peace and stability. In October the AU called for immunity from prosecution for sitting national leaders, and for the suspension of the ICC’s cases against President Uhuru Kenyatta and Deputy President William Ruto of Kenya. On November 14, an AU-endorsed request to suspend the cases against Kenyatta and Ruto failed to obtain enough votes in the United Nations Security Council for passage.

Drink This! Cup Show 2014 Photos » Workhouse Ceramics Drink This! Workhouse International Ceramic Cup Show 2014 Drink This! 2014 showcases ceramic drinking vessels by contemporary artists around the globe. The focus of the exhibit is on the variety of ways artists explore the cup, in functional, sculptural, traditional and non-traditional forms. Thank you!

Conservatives erase Internet history - Public Sector IT The Conservative Party has attempted to erase a 10-year backlog of speeches from the internet, including pledges for a new kind of transparent politics the prime minister and chancellor made when they were campaigning for election. Prime minister David Cameron and chancellor George Osborne campaigned on a promise to democratise information held by those in power, so people could hold them to account. They wanted to use the internet transform politics. Full Episodes on History Season five begins with Ivar the Boneless asserting his leadership over the Great Heathen Army, while Lagertha reigns as Queen of Kattegat. Ivar’s murder of his brother Sigurd sets the stage for vicious battles to come as Ragnar’s sons plot their next moves after avenging their father’s death. Bjorn follows his destiny into the Mediterranean Sea and Floki who is suffering from the loss of his wife Helga, takes to the seas submitting himself to the will of the Gods. This season is full of startling alliances and unbelievable betrayals as the Vikings fight to rule the world. Get the new Vikings VR app. The free Vikings VR app for Android and iOS puts viewers right inside the action, alongside some of your favourite characters from the hit HISTORY television series.

Fire Update: Lost Many Cameras, 20 Boxes. No One Hurt. Scanning Center with Fire Damage to Left of Main Building As fires go, we were lucky. We are still assessing what happened but this is where we stand: * No one was hurt. Deep Watering Tomatoes for a Bumper Crop As the plant that often seems to be the central highlight of the summer gardening season for most folks, everyone wants the biggest and shiniest tomatoes possible. So there are no shortage of tips and tricks out there to develop the size and sheen of tomatoes. But most of these tips and tricks only slightly improve the plant's production, many of them seeming to do nothing at all - mental bias and imagination can go a long way in supporting useless tricks. Well, here's one method that the people who try it have a hard time not noticing a difference in their plants. And by difference, I mean tomatoes taken to the next level. It's called "deep watering", and it is exactly what it describes, watering deeper in the soil.

A Startup Envisions a Low-Power, Long-Range Internet of Things The iPhone wouldn’t stop chirping. On a recent morning I was riding in a car through Silicon Valley with three people from a startup called Iotera. A small tracking tag was attached to the passenger-side sun visor. Our mission was to see how far we could drive from Iotera’s office building before the tag would stop transmitting its location to a small base station on the building’s roof—which meant the location-logging app on the phone would go silent. It took several miles. That’s good news for Iotera, which is developing tracking technology that can work throughout cities without requiring access to a commercial wireless network or even a short-range wireless protocol like Bluetooth.

dood présente DOM: Digital Object Maker The project Who are we? We are two childhood friends with complementary skills: mechanical engineering, business, arts, marketing, music, teaching... 3D printing has been a passion of ours for years. We use this technology for personal projects as well as for building prototypes for our clients. Origin of the project Grow 100 Pounds of Potatoes in 4 Sq Feet On many occasions, we've been tempted to grow our own potatoes. They're fairly low maintenance, can be grown in a pot or in the ground, last a fairly long time if stored properly, and can be very nutritious (high in potassium and vitamin C). Here's more incentive: according to this article, you can grow 100 pounds of potatoes in 4 sq. feet. Learn how after the jump...